The Oakland Symphony kicked off its new season with Renshaw and Rachmaninoff at the Paramount Theater on Friday October 2nd, 2015.
It was the first time I had been to the symphony in years.  I used to play the flute in junior high school, so I was excited to take in a night of classical music.

In the lobby, concert goers were greeted by a performance by Heads Up & Today’s Future Sound. Heads Up is a partnership between Head Royce School, a private school located in East Oakland,  and the Oakland Unified School District. The mission of Heads Up is “to provide underserved middle school students of color from Oakland Unified School District with challenging and enriching programming.” http://www.headroyce.org/page.cfm?p=3585  The program serves more than 120 students a year. Over the years, Heads Up has served more than 1,000 low-income youth of color from Oakland. It is nice to see them featured in the lobby and for the Oakland Symphony to shine a little light on them.

Entering the theater, I saw a variety of people of all ages. There were some beautiful elders, dressed in their finest. The Paramount Theater has that vintage elegance to it, and the guests that evening reminded me of a different time. 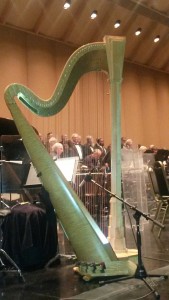 As we took our seats, the orchestra members were on stage, all dressed in black, tuning their instruments. Concert Master Basma Edrees stood and the musicians all tuned their instruments in unison. Maestro Michael Morgan Music Director & Conductor of the Oakland Symphony took the stage and the orchestra began with Mason Bates Devil’s Radio. It started with light soft notes, then it built. The harmony was really beautiful. I realized it takes a lot of focus and teamwork for a group of musicians to make such a tremendous sound. They were quite impressive.  The music draws you into its peaks and valleys. For a moment it sounded a bit bluesy, and I loved when the music went from loud to a whisper.

Next, Kenneth Renshaw took the stage. Renshaw is quite the talent and has won various international competitions. He studied with the legendary Itzhak Perlman at the Perlman Music Program and is currently studying at Julliard School.  Performing at the opening night of the Oakland Symphony seemed like it was a special occasion for him.  He started with a dramatic piece – Sergei Prokofiev Violin Concerto No. 2 in G minor, Op 63. He and the orchestra created music like a dance together. There was a lot of feeling and passion in the notes, and I enjoyed the deep foreboding sounds of the cellos. Renshaw and the symphony sounded amazing, very powerful, and almost like this could be a score in a film. They took a break before starting a second piece, and a woman yelled “Bravo” at the perfect moment. How classy and very apropos.

After intermission, the Oakland Symphony Chorus and Chorus Director Lynne Morrow came on stage. Morrow is celebrating 10 years on the podium, and was greeted with a warm applause. They began with a selection from Liebeslieder Waltzes, Op 52. Morrow was so graceful as she conducted and interpreted the music. It was good to see a woman on the podium. The symphony and chorus make a lovely combination and it was nice to hear voices on the stage- very pretty indeed.

For the finale, Morgan came back and they finished the evening with Sergei Rachmaninoff Symphonic Dances, Op 45. The musicians all played their parts beautifully and I loved the dramatic crescendo’s.

The Oakland Symphony will be hosting its 2015 Oakland Symphony Ball on Saturday October 17th, 2015. For more information you can go to the website http://www.oaklandsymphony.org/ball/ . The symphony’s next performance, the Lost Romantics, will be on November 13th.  These are symphonies “that people have stopped playing,” Morgan said, because many orchestras are focusing only the classics.

The opening  evening was definitely a reminder of the rich arts and culture we have here in Oakland, and I look forward to taking in another night with the Oakland Symphony in the future.