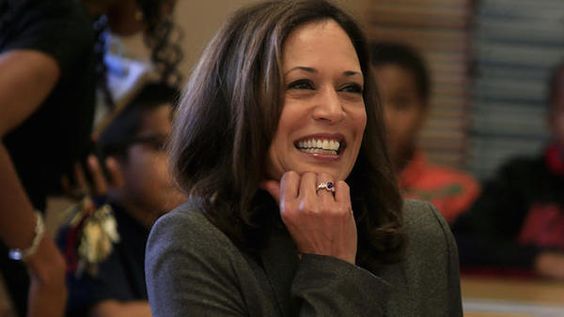 On Wednesday August 30th, 2017, Senator Kamala D. Harris returned to her home town of Oakland, Ca and held a town hall meeting at Beebe Memorial Cathedral. This was a free event that I heard about on the KTVU morning news. You had to register on Event Brite to receive a free ticket. Luckily a few of us who got there a bit early and stood in line were able to attend. I was greeted and ushered in by a lovely woman who was a member of the Beebe Memorial congregation. The cathedral is beautiful inside with high ceilings and beautifully carved wooden beams to help support it. Blue and pink stained glass windows adorn both sides of the church and a large wooden cross is the focal point. In 1966, the congregation moved from its previous location at 598 31st Street and marched to their new home here on the 3900 block of Telegraph Avenue.

Rev. Dr. Charley Hames Jr., Senior Pastor at Beebe Memorial Cathedral, welcomed the crowd of approximately 350 people. “It is our vision to be a vital part of this community,” he said.

Senator Harris then took the stage. “It is so wonderful to be here,” she said. “I am a proud daughter of Oakland, Ca. We need to face and confront the truths that are facing our country.” She then stated that what happened in Charlottesville was devastating. She thanked communities like Oakland and the Bay Area for standing together against injustice. “What we do makes a difference, so we can’t give up,”she said.

She also thanked the community for standing up to help save The Affordable Care Act. She said she had been worried about what would happen regarding health care for so many Americans.  “The beauty about what happened is that it showed that democracy does work,” she said.

She then moved the discussion to the DACA Program. ( DACA stands for Deferred Action for Childhood Arrivals.) Immigration and deportation issues face so many families in this country from all over the globe. There are 220,000 undocumented young people living in California who are currently enrolled in the DACA Program. These young people were  brought here as children. Called Dreamers, enrollee’s in the DACA program are students or are gainfully employed and working to make valuable contributions to their communities.  When they applied they were thoroughly vetted and have no criminal records.

Senator Harris said U.S. officials promised the Dreamers that they would not share their information with ICE (U.S. Immigration and Customs Enforcement). “America needs to keep her promise to these young people,” she said. “These kids are  living in utter terror right now because they are worried that President Trump’s administration will rescind the DACA program.”

On August 24th, California’s Governor Jerry Brown wrote a letter to President Trump urging him “to maintain the DACA program, and work with Congress to pass the DREAM Act of 2017, so that DACA recipients may have a pathway to permanent legal status, and eventual citizenship in the United States.” The Los Angeles Time published an article written by Mina Corpuz which shows Gov. Brown’s letter in full: http://www.latimes.com/politics/essential/la-pol-ca-essential-politics-updates-gov-brown-urges-trump-to-keep-program-1503700710-htmlstory.html .

Senator Harris reminded everyone attending the town hall meeting that “we need to fight for comprehensive immigration reform.” This issue is close to my heart and I sincerely hope that the DACA program is maintained.

Senator Harris also said a ban on transgender individuals serving in the military is a fundamental violation of their human rights. Thankfully, Defense Secretary James Mattis announced that the transgender ban for current military service members is on hold, until a new study conducted by a panel (not yet chosen) is in place.

Senator Harris said funding for Planned Parenthood is important to her, as well as the realities around climate change. She is on the U.S. Senate Committee on Environment & Public Works.  “Our babies deserve to have clean air, and clean water,” she said.

Further, she said she would like to see the cash bail system replaced with a risk assessment system and announced the bill she is co-sponsoring with Senator Rand Paul (R) of Kentucky. I for one am pleased to see two U.S. senators from two different parties work together! Chron.com published an article written by Mihir Zaveri regarding this bill http://www.chron.com/news/politics/us/article/U-S-Senators-file-bill-against-cash-bail-systems-11303398.php

Senator Harris also extended her thoughts to the City of Houston which is currently in a state of emergency due to Hurricane Harvey. She said  it was moving to see a diverse group of people coming together to help those in need during the rescues, pointing out that people weren’t asking which party (Democrat or Republican) someone belonged to before rescuing them and getting them to safety.

During the question and answer period,  several well-spoken individuals represented the Bay Area, ranging from medical students, business owners, community organizers to health professionals. “What does it feel like to take this walk from Oakland to D.C., and walk amongst giants?” asked a business owner.  A great question I thought.  “To be effective leaders you must walk into rooms with people that don’t share the same mindset as you,” she replied.

She encouraged everyone to use their voice to organize front and center. She told everyone to prepare for the 2018 election and the census that is due in 2020. She noted how important the census is, as we know the demographics are changing, and we need to obtain a true count of who America is. “If people don’t trust the people knocking on their door. They won’t open their door, and then they won’t be counted,” she warned. She encouraged census officials to hire  people who represent their communities.

Lastly, Greg C. Garrett, chief of policy, planning, & external affairs from the Alameda Health Consortium spoke about the great concern regarding the $4 billion in proposed healthcare cuts  facing the nation. He said all community health centers are at risk and that 67 percent of the Consortium’s Medicaid patients are seniors. “Health care should be a right not a privilege,” Senator Harris said. She said she is hoping to help sponsor the “Medicaid for All” bill which brought cheers and applause from the crowd.

“Racism, homophobia, and anti-Semitism are real, and  one of our strongest tools is a coalition. We stand together,” she said in closing.

It was a great discussion and town hall meeting. A proud day for Oakland. Rev. Hames Jr. thanked all for coming and Oakland Mayor Libby Schaaf thanked Senator Harris for coming back to her hometown. The crowd applauded warmly. I was thankful that I attended and it was an honor to see our new Senator Kamala D. Harris shine so brightly.