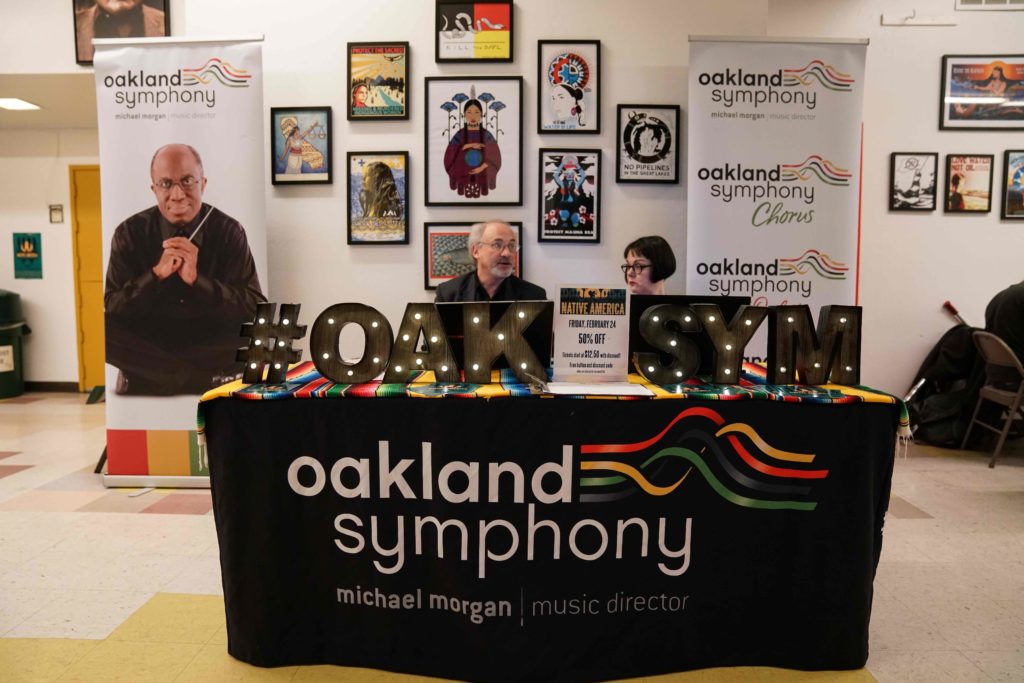 The Oakland Symphony presented a sneak peak performance of its upcoming showcase “Notes from Native America” at Intertribal Friendship House (IFH) on February 7th, 2017. IFH is known as Oakland’s longest running Native American community center, and is one of the first of it’s kind in the nation. IFH website 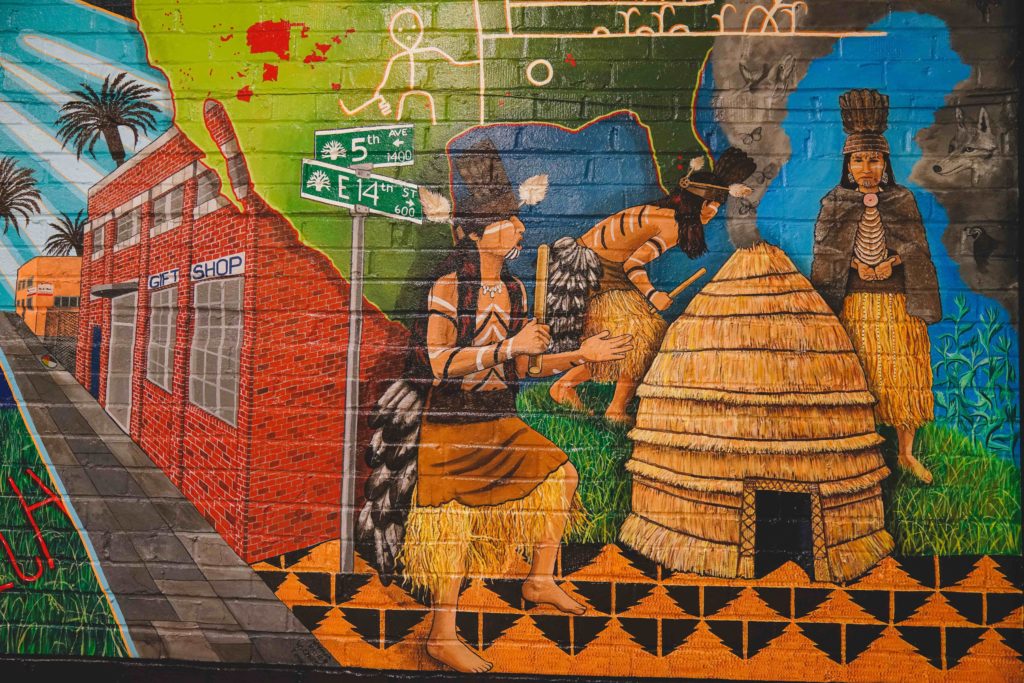 As you walk into IFH you see a wall of indigenous artwork. There are murals and indigenous themes throughout the entire building. You can feel that this is a powerful place. The pre-show highlighted Potawatomi Flute Player Walter Ogi Johnson, and the evening was catered by Wahpepah’s Kitchen, a female- owned catering company run by Chef Crystal Wahpepah. She served a buffet featuring Native foods such as fry bread and blue cornmeal chocolate cake. It was beautiful.  That is one thing I love about IFH – they are always feeding the people.

Steven Payne, executive director of the Oakland Symphony, opened the evening and thanked The Wallace Foundation for providing support for the evening’s free performance at IFH. He explained that the foundation works with two dozen communities nationwide encouraging them to connect with the arts. It was created by the founders of The Readers Digest Association Dewitt & Lila Wallace. They left part of their fortune to this foundation “to better the lives of disadvantaged children in America’s urban areas, and foster the vitality of arts for all,” according to the foundation’s website. 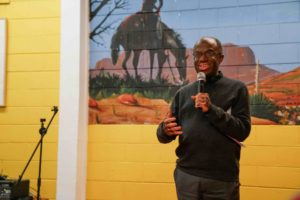 Maestro Michael Morgan, conductor for the Oakland Symphony, explained how they chose to do a piece highlighting Native America. “Who is not here. How can we get them to come here?” he said.  It was so inviting and welcoming to hear him say that. “It’s about learning who your community is, and it’s about coming together.” He then introduced Vincent Medina the narrator of “Notes from Native America” and Ohlone storyteller.

Vincent spoke of the Ohlone villages of his ancestors that were near now Hayward, Walnut Creek, and Napa.  “Connecting with our language connects us with our ancestors,” he said.  He then read a beautiful narrative. I loved the part where he read “words caress us like a grandmother” and “we thrive in the footsteps of giants.” He said a prayer in Ohlone. The “East Bay’s oldest words.” 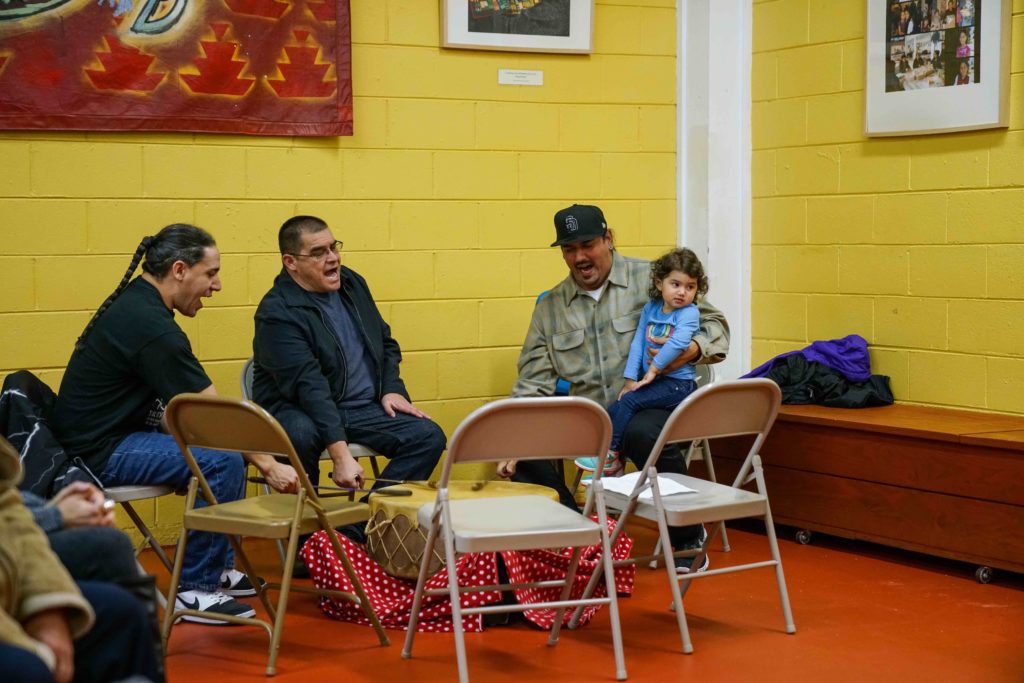 All Nations Drum sang. They are a local Native American drum/ singing group and have been dancing and singing together in the Bay Area for more than 20 years. Manny Lieras, a member, spoke of being proud to be part of a truly established urban native community. He described All Nations’ weekly drum practice at IFH where they share the history of the Pow Wow drum and explained how the Pow Wow originally started as a show to highlight the vanishing Indian.

“We sing for the people,” he said. “Dancers are taught to pray with every step. To dance for those that cannot dance.” All Nations  sang another song and Native- American dancers Aurora Mamea, Yvonne and Lynn Marshall-Lieras, and Eddie Madril danced, traditional Native American style. It was stunning.

Next up was John Wineglass one of the composer’s from “Notes from Native America.” Wineglass studied at New York University and Julliard.  “Coming to Oakland is like coming home,” he said. He moved from New York  to Monterey several years ago and started being inspired by nature. He began playing fundraisers for The Big Sur Land Trust and became more interested in being an activist for the land. He spent time at a friend’s ranch, and at the stunning Pfeiffer Beach near Big Sur.

He said Pfeiffer Beach is a magical place that inspired him to begin the piece. He explained some of the sounds in his piece. The middle section was inspired by running water. The bookends of the piece are improvisational, and the fourth and final movement is a tribute to the Native American. He was moved. You could hear the emotion in his voice. “It was a spiritual experience,” he said, “and it changed my life.” He then played a bit of the piece on his electric piano. It was so pretty. Soft. Like a love song.

He then introduced the next performer/ collaborator Kanyon Sayers – Roods/ Coyote Woman a Costanoan Ohlone and Chumash singer. Her mother is the tribal chairwoman of Indian Canyon. Indian Canyon is a “safe haven for Indigenous people to use land for ceremony”, and is federally recognized Native land. Kanyon shared some of the greatest animal calls I have heard a person do. She does an impeccable coyote call, a fox call, a hawk cry. I was impressed with her artistry and her comfort in front of an audience. She then sang an amazing “grandmother’s song,”and we all heard the beauty and power of her voice. She is gifted young woman whom Maestro Michael Morgan calls a “force of nature”.

It was a wonderful evening. Having grown up here in the local Native American community, I was really proud to see the Oakland Symphony do this free performance and collaboration “Notes from Native America” at IFH. I greatly anticipated the full concert on February 24th, 2017 at the Paramount Theatre in Oakland. And I was not disappointed. It was truly a  treat for the listeners, performers, and the ancestors of this land. 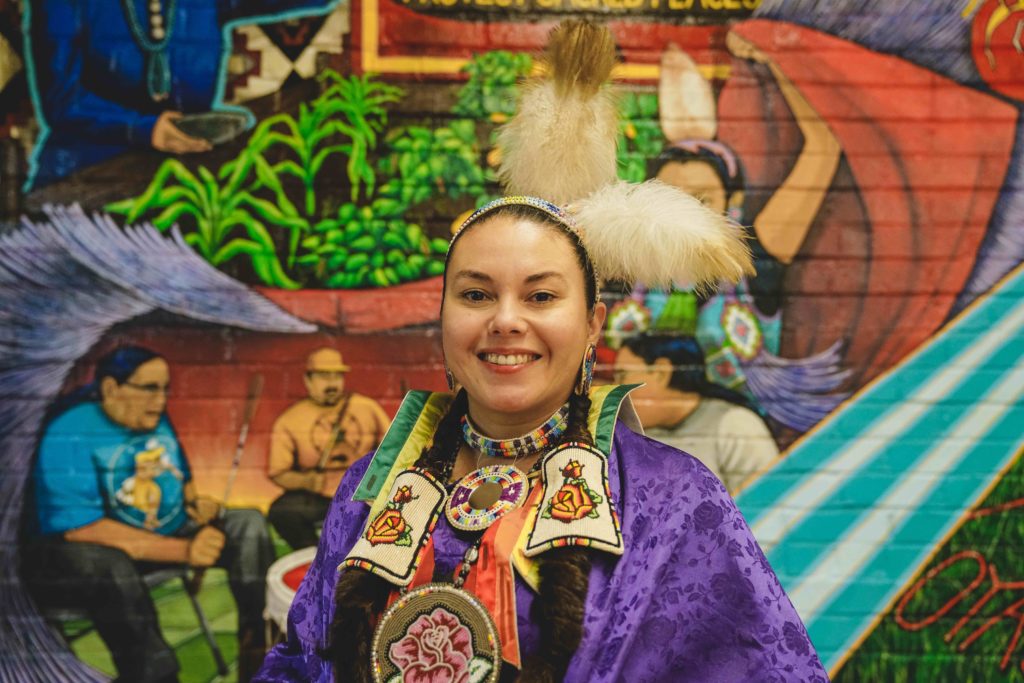