Stan Dodson is the executive producer of the film, “Trailhead.” He is also the manager of La Farine Bakery in the Dimond District and past board member of the Dimond Improvement Association and Friends of Joaquin Miller Park. 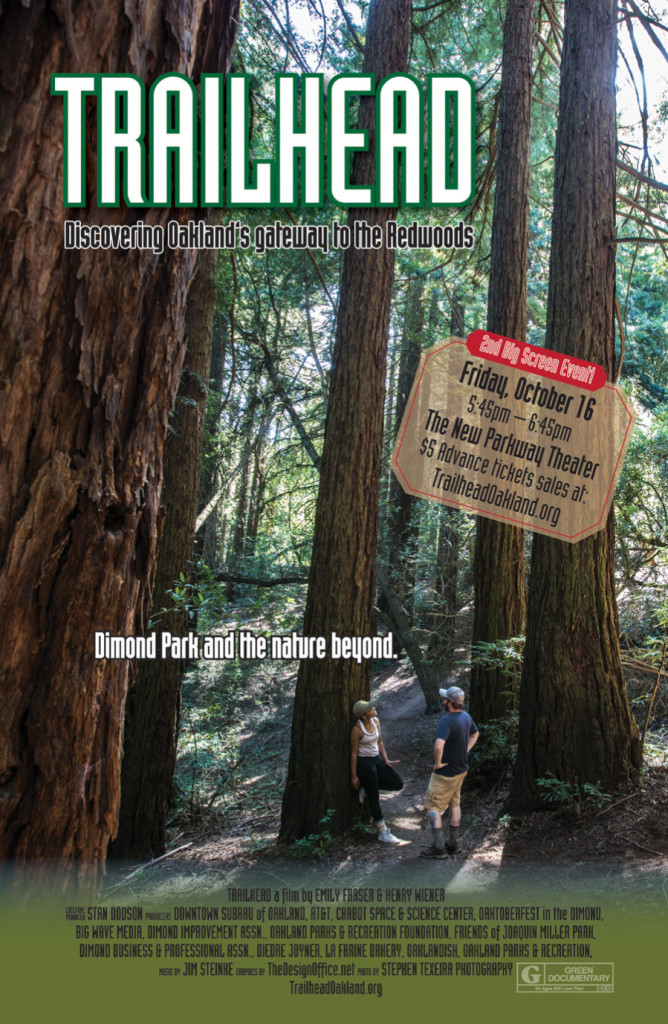 “Trailhead: Discovering Oakland’s gateway to the Redwoods”  was screened October 7 at the Chabot Space and Science Center before an enthusiastic and appreciative audience. It was praised as “a complete triumph,” “a tremendous tribute to the beauty of Oakland” and left Oakland residents  “swelled with pride.” Another screening will be held this Friday.

For Dodson, the documentary was an outgrowth of his passions. He has worked as a volunteer to promote and maintain the trail system that connects Dimond Park to the Bay Area Ridge Trail since 2008. He leads hiking tours for those who are interested in exploring the trails, canyons, and paths throughout the trail system.

Through his community involvement, Dodson continues to reach out to the community–including residents, merchants, non-profit organizations, city staff, and elected officials. With his team of local documentary filmmakers, Dodson has produced an informative and beautiful HD documentary that will encourage people to use the trails and parks, inspire more volunteers, and shine a positive light on the City of Oakland.

Dodson went out personally to get the funding for this film. He approached the City of Oakland and local merchants. He learned that there were some documentary filmmakers who lived in his neighborhood. He approached them and asked if they would be interested in documenting the trails that connect the parks in the Oakland hills—from Montclair, Piedmont, Dimond District and other surrounding areas.

He is a hiker, himself, and that is what peaked his interest. The film celebrates a relatively unknown urban gem and will feature Oakland’s largest wildland trail system that connects the heart of Oakland to redwood forests and more than 500 miles of trails throughout the East Bay.

When he went in search of funding, Dodson said he was surprised that many local merchants were interested in supporting this project. Experienced filmmakers helped him to develop a budget and he projected he would need $10,000-$15,000.

His filmmaker neighbors were amazed at his persistence and tenacity. As professional filmmakers, they develop projects as part of their work, but they had never had someone come knocking on their door with an idea in mind. Filmmakers get proposals all the time, but because of his persistence they realized that he was serious about the idea.

Over time, they helped him develop a shooting schedule – sometimes they would shoot from sunrise to sunset. Dodson was the editor of the film. The original footage was 90 minutes long—but of course that was too long for the story he wanted to tell. Eventually, the film was cut to 45 minutes, then  30 minutes, and now the final product is down to 15 minutes. This is the length that Dodson is most pleased with.

Dodson said he  wants the audience for this film to be Oakland residents and visitors alike. It will explore both the urban and rural trail system that connects Oakland neighborhoods and business districts to the Bay Area Ridge Trail and beyond. The film will include the history of Dimond Park, Dimond Canyon Park, and Joaquin Miller Park. The film will also tell the story of the multiple uses of the trail system for hiking, mountain biking, dog walking, bird watching, picnicking, and youth education.

In order to make the film, Dodson interviewed a variety of people from different backgrounds and walks of life. His list of interviews includes a local historian, bicycle clubs, staff of the East Bay Regional Park, real estate experts, hiking clubs, and creek restoration volunteers.

As far as distribution, he’d like to have at least 1,000 DVDs produced so it can be available for the parks and recreation department, Chabot Space and Science Center, Convention and Visitor Bureau, the real estate community, neighborhood email lists, local theaters, OUSD classrooms, libraries, public television, and city council websites. Primarily, the film will be distributed online and his dream and aspiration is to have it shown at film festivals regionally and nationally.

I highly recommend that all folks come out to see the film and something positive about Oakland for a change—something extremely positive!