On November 10, while the Oakland city council public safety committee held its bi-monthly meeting, hundreds of fast food workers and organizations in support of the Fight for $15, to raise the minimum wage, gathered outside City Hall in protest. Tambourines, drums and chants sounded like fading muzak as the conversation of safety began inside. 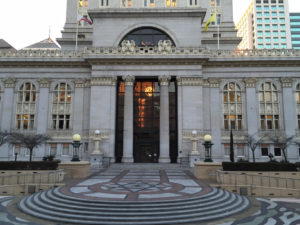 Several items were brought before the committee, including the  Quarterly Informational Report From the Oakland Police Department (OPD) On Crime, Crime Trends, And Crime Reduction Activities.

According to the City of Oakland website, in 2013 the Public Safety Committee requested a quarterly report from OPD on crime trends and crime reduction activities. This report is provided four times a year and updated to include the preceding three-month period (January to March; April to June; July to September; and October to December).

Assistant Chief Paul Figueroa opened the discussion by presenting a 20 plus-slide powerpoint wherein captains from each district area gave details about the statistics in the report. The report gives Oaklanders a breakdown of crime in their communities and also shows what times and dates these crimes generally occur;  it can be accessed online.

Statistics are received from various programs like Ceasefire Violence Reduction Strategy, ShotSpotter as well as human trafficking investigations and general policing. Figueroa said OPD does weekly shooting reviews in an attempt to pinpoint areas where most shootings occur and to stay current on changing trends.

This brought the conversation to ShotSpotter, a system OPD uses to spot gunfire from around the city in real time. Oakland’s Vice Mayor Rebecca Kaplan, an outspoken advocate of gun control, reiterated her opposition to any effort to defund ShotSpotter. Kaplan re-affirmed her support for the $1 million allocation for tracking gun violence, reciting her familiar quote “If you take a shot, you will get caught.” It would seem there may be some merit to this statement; according to citywide statistics, shootings are down 13 percent.

Further statistical information was presented by police department area commanders as council members and civilians alike sat intently, listening to  the breakdown of crime in their communities and strategies for improvement.

Year-to-date, if we look at Oakland as a whole, crime is up 4 percent, with a 1 percent decline when you look at the average over three years – meaning some crimes see an increase  where others decrease,  and just a few stay virtually the same.

For instance, murder is up 24 percent and auto burglary has risen 20 percent. Rapes increased  6 percent from last year and 8 percent from the three-year average, with the number jumping from 139 to 141, and now  up to 150.

Crimes like aggravated assault with a firearm and arson have both declined by 6 percent and there has also been a decline in commercial and residential burglary.

Statistical data like this is influential in staying informed about crime in Oakland. Also, I find it particularly helpful to know where crimes like robbery generally occur on my everyday routes so I can either be on guard or steer clear.

When it comes to aggressive crimes, data about previous incidents is essential to knowing when and where to be more alert. Crimes such as robbery and burglary trend near or around BART, especially the West Oakland, MacArthur and Fruitvale stations.

Area 4 covers Fruitvale through 55th Avenue; the overseeing officer is Captain Nishant Joshi. For the most part, crime is down 1 percent in this area,  with robbery being the only crime that has increased.

As a civilian reading this information, my first thought is to be more aware when coming in and out of BART stations. The items targeted are similar for all areas: cell phones (mostly Iphones) , Ipads,  gold chains or jewelry and of course money.

In many instances in and around Fruitvale, victims are being physically searched. People are also being robbed entering and exiting vehicles, residences and on the street just talking on the phone. Mostly when people are distracted.

In Area 3, where crime has had no significant change, we find that robbery and auto burglary have had a slight rise.  Area 3 Captain Freddie Hamilton gave information about peak hours, days and hot spots where robberies generally take place. He gave a breakdown of the racial demographic of the victims,  whether or not a weapon was used and what items were taken. Capt. Hamilton said the suspects in Area 3 robberies are generally juveniles, usually on probation, who live outside the area. He said there is an increasing number of female suspects.

Oakland is a large place that is far more complex than statistical mapping condensed into a 20 plus -slide powerpoint. I found this report interesting because I’ve lived in the “bad” parts of Oakland with good neighbors trying to make it through to the next day. As a longtime resident of Oakland,  I am impartial to listening to someone break down a neighborhood to mere increased and decreased offenses.  However, as I left City Hall,  I was somewhat more alert heading to BART at the corner of 14th and Broadway.

I was aware as well. Not just because of some new, conscious, percentage-driven fear of my city, but because her (the city’s) crisp breath and beautiful lights guided me down the steps and safely onto the train that carried me home.