Oakland Voices is recruiting for the 2015-16 Class 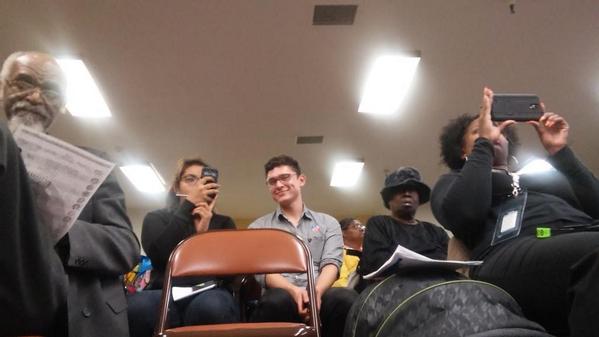 EAST OAKLAND — One of the 2014 Oakland Voices correspondents reminded me that, as coordinator, I looked at the first gathering of our community correspondents and said, “This is how newsrooms should look.”
The group represented Oakland in all of its diversity: African-American, Polynesian, Latino, Caucasian, straight, gay, lesbian, religious, undocumented, men, women; they ranged in age from 18 to 65.
That diversity was reflected in the stories they uncovered. We learned that Oakland has the first LGBTQ gym, and the founders were wrestling with how it welcomed transgender people, months before Caitlyn Jenner started a national conversation about the issue.
Correspondents wrote about a mural that honored female victims of violence and one that represented the community’s decision to re-create an image, painted by out-of-towners, that was offensive to residents.
We read about lush flower gardens in East Oakland — when was the last time you saw East Oakland associated with flowers? Readers learned about the most polluted ZIP code in the city — 94621.
The correspondents covered the mayoral race and brought fresh perspectives, for example, highlighting the fact that undocumented residents are excluded from the political process.
They wrote about neighborhood health fairs, two farms in East Oakland — complete with goats, chickens, ducks and pigs — as well as an analysis of the structural vulnerability of the Fruitvale district.
As a journalist for more than 40 years, I’ve long believed that residents have a better understanding of their neighborhoods than what we see in the mainstream press, particularly when it comes to communities of color. The 2014 Oakland Voices correspondents confirmed that belief and then some.
In addition, the diversity of the group led to interesting discussions about gentrification, the media’s preoccupation with the violent few at huge, peaceful protests, as well as fascinating stories about growing up in Oakland and the history of the city’s neighborhoods.
So, we’re recruiting for the next group of community storytellers. In the nine-month program, 10 correspondents receive training in basic journalism skills, including writing, interviewing, photography and video. They write a minimum of one story a month, preferably two, put together photo essays and tweet news from events. The articles are posted on the website oaklandvoices.us and are frequently printed in the Oakland Tribune and posted on the Tribune’s website. If that’s not enough, each correspondent receives a $1,000 stipend.
The application deadline is June 19. The program begins with an orientation weekend July 18 and 19. You can apply at http://mije.org/oakland-voices-2015-application or pick up an application at the Oakland Tribune, 1970 Broadway.
Raise your voice and tell the untold stories of your community.
Oakland Voices is funded in large part by The California Endowment, a nonpartisan health care foundation, and operates in partnership with this newspaper and the Robert C. Maynard Institute for Journalism Education.