Brooding bodies surging onto cracked streets stained with drops of ripened watermelon slices sold from a corner stand where two Mexican women chismes (gossip) after they hand you your change. Babies pushing babies in strollers while toothless grins peek from under blankets. Colored shapes line the streets and for 20 years they stretched up and painted the walls.

August 16, 1995 the Summer Youth Employment Training Program (SYETP) unveiled a masterpiece of heroes, pyramids and a colossal head. This 10-foot mural was on 82nd and International Blvd., the front entrance of the East Oakland Youth Development Center (EOYDC) painted by local artists and
the youth attending SYETP. Not only did the art depict influential people of color but it also mirrored the faces of the surrounding community. This significant work included Cesar Chavez, W.E.B Dubois , Philip Veracruz- a Filipino labor leader who fought alongside Chavez in the farm workers movement- and other influential people of color like Clara McBride Hale, founder of the Hale House Center for abandoned children, Jackie Robinson, and Maya Angelou. 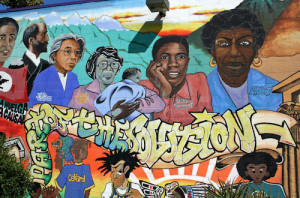 This potent piece also included MAAT, the ancient Egyptian symbol of truth, balance, order, law and morality,  sometimes known as the goddess of truth and justice. Also in the mural, a likeness of a series of colossal statue heads  found throughout Meso and Central America signifying the Olmec civilization. A few other depictions were of Mexican and Egyptian pyramids: the mortuary temple of Hatshepsut, an Egyptian pharaoh; the Colonnade of Ipet-Isut, the largest complex ever constructed in an ancient city, the city of WO-SE in Kemet (Africa) which was a series of temples built over a period of nearly 20 years. Somewhere among all this greatness is Hannibal, the Nubian leader who invaded the Roman Empire on elephants for 30 years. There was this and there was more. 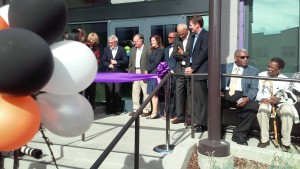 On Tuesday September 29, 2015, the ribbon cutting ceremony for the new EOYDC revealed a more modern center. Mayor Libby Schaaf  came and witnessed  this “New Era,’ which is coincidentally the center’s newly adopted motto. For Regina Jackson, President and CEO of EOYDC for the last 21 years, this is an amazing opportunity. As well it should be. Staff and students seem eager to participate in the activities within these new walls.

But for the outsider looking in, this “modern” building may be a reminder of Oakland’s gentrification as it is the only rose in a bed of lillies.

During  a visit to the EOYDC, I talked with a staff member who had been at EOYDC before the mural was erected and he assured me there is talk about a future mural.

Whatever the case may be, EOYDC is headed towards a new direction and although there is nothing wrong with beginning something new, this doesn’t mean one is only obligated to do that. History is not new, it’s old, yes, but it should never be forgotten, or covered up- so the next generation of brooding bodies and toothless grins will not have to chip away at layers of paint to find themselves.