COVID cases are rising in the Bay Area, and health officials are asking people to[Read more]

This past summer, two Oakland firefighters came to my apartment building to get a replacement[Read more]

This past summer, two Oakland firefighters came to my apartment building to get a replacement[Read more]

There was ample sunshine, a lot of cameras (including a drone), some people wearing business[Read more]

For the first time, I feel part of an Oakland landscape, and can embrace being[Read more]

Sometime during the pandemic, during distance learning, Nelda Kerr felt that her middle school students[Read more]

Starting next Monday, OUSD schools will not require masking while outdoors.

The opposition against Oakland school closures isn't giving up just yet.

Dr. Saturu Ned on why the Black Panther Party survival programs of the past may[Read more]

"In some ways, phone, email, text and Zoom have increased my contact with friends."

Ariel Lloud, mom of two children at Grass Valley and organizer with Reparations for Black[Read more]

The state and Alameda County are easing up on indoor mask rules. Starting on February[Read more]

Update: On February 9, around 1 a.m., the OUSD school board passed a modified resolution[Read more]

On a cold Monday night in the middle of a pandemic, almost two hundred members[Read more]

OUSD may be moving forward with closing more schools

Beginning in January, Oakland Athletic League (OAL) is partnering with Dope Only Marketing, the creator[Read more]

Daria Belle exhibits her social justice and politically-themed art around the Bay Area, such as[Read more]

On any given night, over half a million Americans experience homelessness. A 2019 count indicated[Read more]

Yesterday, Oakland City Council members passed an ordinance that would go into effect on February[Read more]

This opinion piece was first published at The Citizen, Laney College’s news outlet. In America,[Read more]

There is a maxim in journalism, “If it bleeds, it leads,” and there have been[Read more]

When every outlet from CNN to Fox leads with Oakland’s unprecedented crime wave, it causes[Read more]

The first known COVID omicron variant case has been reported in the U.S. after a[Read more]

Raheem Divine asked Oaklanders about their dreams for the future of the Town.

Tyla Brown asked Oakland natives, newcomers, and other Bay Area residents: "What do you love[Read more]

Sami Abu Shehadeh is one of only 10 Palestinian legislators in the 120-member Israeli Knesset (Parliament), even though Palestinians make up 20% of Israel’s citizens. Recently, he toured the[Read more]

On Monday, April 25, Oakland City Council held a special meeting with the Youth Advisory Commission to give an informational report on youth homelessness in Oakland. Nationally each year,[Read more] 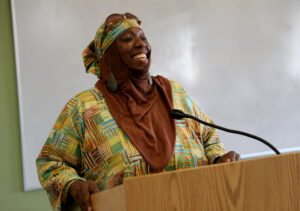 Amelah El-Amin speaks during the Oakland Voices graduation at the Oakland Public library on 81st in East Oakland on on March 8, 2020. (Photo by Jane Tyska)