Oakland Voices held their second forum “Focus on Affordable Housing” on April 7th at the 81st Avenue Branch Library in East Oakland and panelists highlighted the policies and strategies that can preserve affordable housing in the city.

The evening began with a commanding performance from Dimensions Dance Theater. “DDT has become known for its cross cultural and issues oriented collaborations, bridging cultural, racial, and ethnic differences through the arts,” the dance company’s website states. The dance was performed by three strong African- American women and was a beautiful artistic expression that showed a snap shot of what is going on in Oakland. People and longtime Oakland residents are being forced out of the city due to high rents. Per Myres’ comment,  “No solution is quick enough” to help the working class, and low income people of Oakland. 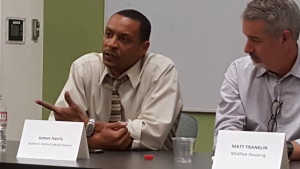 James Harris, president of the Oakland School Board

Harris shared his concerns over OUSD teachers not being able to afford to pay these high rents. Harris said that OUSD is beginning to seek development opportunities between OUSD and the city. They are working on plans to create housing on OUSD land for teachers. Considering that teachers are so important to the next generation, I think it would be a strong move for Oakland, and a good move for the children.
Franklin represented  MidPen Housing, a non-profit, public benefit corporation whose mission is “to provide safe, affordable housing of high quality to those in need.”  MidPen is currently a part of Oakland’s Brooklyn Basin Project. This project is slated to build 3100 apartment/ condominium’s near the Oakland Estuary. MidPen Housing and city officials are working towards making sure that 495 of those 3100 units are dedicated to permanent affordable housing units. MidPen is also teaming up with Hello Housing to rebuild, and refurbish 30 homes within Alameda County. These homes sales will be targeted to moderate income, working -class people. Franklin said they are working to create affordable home ownership “to try and prevent displacement.”

When asked why city officials seemed reluctant to demand affordable housing when approving large developments, Franklin made the insightful observation that he thinks officials are intimidated by the claims that requirements will scare away developers.

Miller at PolicyLink believes in driving equity for all people. He and PolicyLink are working on establishing an Affordable Housing Bond which will be on the upcoming November ballot. Miller said that “we need all nine counties to agree” to make affordable housing a priority. Franklin also felt that this $500 Million Affordable Housing Bond is a “bright spot” on the horizon. It  would require a two-thirds vote for approval.

Myres said her organization pursues a three-prong approach to affordable housing, starting with stronger rental protections for existing residents, the construction of affordable housing and a focus on increasing job quality, including raising the minimum wage. She emphasized the importance of livable wages.

“No matter how low your rent is, if you are working for the minimum wage and paying for everything else, you won’t meet your rent,” Myres said.

Zamora, representing Causa Justa/ Just Cause, as well Oakland Rising, spoke of their mobilizing efforts to get 35,000 signatures of support to place the Protect Oakland Renters Act on the November ballot. The signatures are needed by June 2016. I signed the petition at the forum. For more information on where you can sign or volunteer, visit the Protect Oakland Renters Facebook page https://www.facebook.com/Protect-Oakland-Renters-1134127099963389/?fref=nf .

Supervisors Wilma Chan and Keith Carson sent a representative to the forum to recruit people who are interested in helping create the language and framework for the Alameda County Housing Bond. For  more information please email maryjuneflores@acgov.org, or Abigail.mariam@acgov.org .
A lot of good information was shared from the panelists as well as audience members. People shared their experiences of displacement and wanted answers.

“When they are creating these plans for new buildings and sites such as Uber, and Coliseum City, who is looking out for the environment?” a woman in the audience asked.

While these issues seem overwhelming, Harris stated that “Oakland city officials and residents need to imagine together what this city can be. How can we best maximize our space? Continue to vote, advocate, and co-construct.”

What I took away from the evening’s discussion is that if every person gets involved, our voices together would be stronger. Let’s not just sit back and watch this city become unaffordable for the working- class people who helped build Oakland. Effective change is possible if each one of us gets involved.  Help spread the word.  Sign petitions.  Make your voice heard.

Here’s a link to the panel discussion.

Filed under: 2015 Project Blogs, Gentrification, My Neighborhood, Our Neighbors