The idea is simple:  our lives are enmeshed in digital information and technology.  We use mobile phones and computers every day and the arcs of our lives are  recorded in the vertical silos of government data banks and the private silos of Facebook, Google, Twitter and other online service providers. 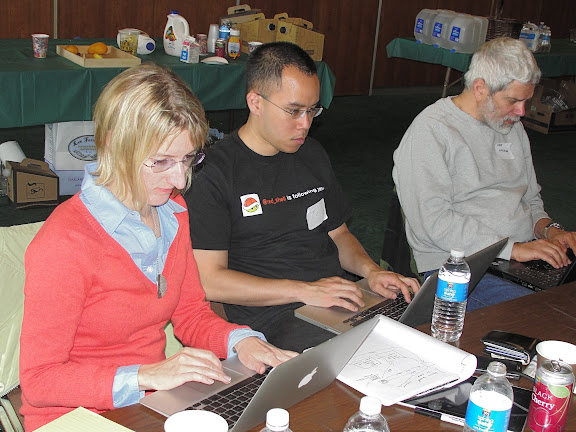 A developer team bangs out code for a new app at the 2011 Code For Oakland Hackathon. By Howard Dyckoff, Oakland Voices 2012.

That’s what community activists and tech heads will be doing this Saturday at Code For Oakland’s Hang Out and Hackathon.  And this year there will be discussion of how to keep the joint community and techie effort ongoing.

Attendance is basically free for community members and those who work for nonprofits.  Developers are only requested to make a small donation of $1 to $20 to help cover costs. Lunch is provided with lots of caffeine to get the coding done. And there will be prizes – rumor has it, $5000 worth.

The action starts at 8:30 Saturday morning in the Kaiser Center at 300 Lakeside Drive, facing Lake Merritt.   This is a comfortable space with sweeping views of the lake and a beautiful rooftop garden.

Learn more about this weekend’s Code For Oakland event by clicking here. You can click here to register. The event’s hashtag is #codeforoakland.

Developers will all be tackling this one essential question: what kind of cell phone-based application would make East Oakland a better place to live and work and play?

The organizers and sponsors of Saturday’s event are part of the emerging Open Data Movement which tries to create access to public data held by city, state and federal governments and also foundations and community groups.  These data can be used to find things and visualize what is happening in our neighborhoods.

There are data collections on which stores take food stamps, on income levels by neighborhood and census tract, on bus and BART schedules, on crime, on drug use, on HIV incidence.  Data miners are also interested in information about foreclosures, voting patterns and political contributions.

Pressure from the Open Data Movement is helping to make those figures open to the public, and soon we will all be able to search and visualize the numbers – information that belongs rightfully to the public.  Oaklanders can now begin to envision ways to combine and mashup that open data and make all of our lives better and help to build a better Oakland.

Click here for a list of data sets now available to all of us.   What can you imagine doing with these?

If you have an idea for a small mobile phone or web application that could make your life better or your community better, then please consider coming down and sharing it with everyone.

You might find a team of developers who will make your idea a working reality!

At Code For Oakland’s debut event last year, teams broke out to turn concepts into real cell phone-based applications that would help improve the lives of Oakland residents. By Howard Dyckoff, Oakland Voices 2012.

The Code for Oakland organizers say this weekend’s hackathon is focused on “building apps, hacking public data and building tools to support economic development in Oakland, improve civic engagement, improve digital education and literacy in our residents and provide tools to attract and sustain local business in the town.”

At Code For Oakland’s debut event last year, $10,000 in prizes and federal sponsorship were awarded for the best applications.

Almost 100 developers and community members toiled together all day to build several applications. The winning mobile app, Txt2work,  was designed to help people reenter their communities and search and apply for jobs via their feature phone.

A second app, BettaStop (@BettaSTOP), used  text messaging to post comments on the quality of bus rides on AC Transit in Oakland.  OakWatch was a mobile/web project to allow real time neighborhood reporting via mobile systems.

Come on down and help bring The Town even further into the Digital Age.