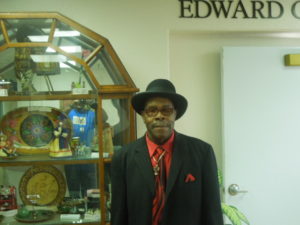 In 1934 Henry C. Williams was born in Helen, Alabama on a sharecropper’s plantation. That would explain why he has spent the greater part of his life fighting for a cause that is very near and dear to his heart: reparations for all black people.

As a black man going thru financial ups and downs, that sounds very good to me.

But there is more to his story and his plight. Over the years, he has compiled an onslaught of paperwork – documents that he enjoys sharing with anyone willing to listen and look for a minute. Papers like The Slavery Era Insurance Proclamation, and a whole file of claims made by the Freedman’s Bureau.

He also has numerous clips and snippets from his life as an activist and community leader, as well as a VHS tape of him conducting numerous interviews throughout his life.

He speaks in serious tones as he goes through the papers and produces a document that reads like a giant receipt. But it’s way more than that. It’s a bill of sale for his grandfather.

I had always heard about the Willie Lynch Letter, slavery, and the Middle Passage. But seeing this document really brought home the business of buying and trading humans who are kept in bondage. In the document, his grandfather was repeatedly referred to as “the stud.” His grandfather fetched a whopping $250 – a small fortune at that time.

Most of the papers were photocopied or printouts from the web. Still, some of the documents had that ancient scroll feel – used and worn like that – undoubtedly from the numerous times he has presented them when telling his story, and making his case.

Williams’ argument for reparations centers mainly around the mid 1860s, when the debate over slavery came to a head with President Lincoln’s Emancipation Proclamation, the final battles of the Civil War, the passage of the Thirteenth Amendment, and the beginning of Reconstruction.

When Lincoln declared slaves free in 1863, Williams alleges, the president also said that each of them was to receive $300. He showed me a document that proved that, from the Freedman’s Bureau – a federal organization set up after the Civil War to help emancipated slaves transition to lives as free Americans. Blacks never got that money, Williams says.

I can sense the animosity in his tone as he goes on to claim that Congress also allocated additional funds for freed blacks, but that they did not receive any of it.

As a result, Williams says his movement is asking for “$21 billion per year from Congress each year from now on to build and rebuild for us homes, businesses, schools and all the things we need throughout the community.” That is a tall order!

Williams says his bold reparation package would “put thousands of people to work.” He then shows me a box filled with letters from supporters.

But it isn’t all reparations and postbellum US history with Williams. He’s got lots of other things in that pile of papers. He pulls out a picture of him and his six children, posing as Williams’ Seven Ways. He explains proudly that it’s the gospel group they once had together. Williams brought up all of his kids in the church – “the only way to raise them,” he says.

Bishop Williams is a man with a cause and he has a lifetime of stories to tell. I was very honored to have met a black man like him.

If you would like to learn more about Henry C. Williams’ case for reparations, contact him at (510)507-3424 0r Jubileerr@gmail.com. He would love to hear from you.

Michael Holland is a 39 year-old slightly disabled man with a checkered past. “Remove all that,” Michael says, “and I am just your average, brutally honest Black man. I also am somewhat of a God ‘freak,’ although I don’t formally belong to a church!”