Why I Go to Oakland’s Public City Meetings, & You Should, Too 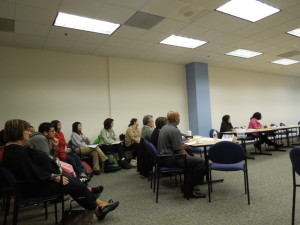 If you attend town hall meetings, protests, and demonstrations, you may have heard the public demanding to be heard when public policies affect them.

But when I recently attended two meetings – Alameda County Mental Health Board (ACMHB) and BART’s Citizen Review Board (CRB) – I discovered very few members of the public in the room.

This was puzzling and disheartening.

Have the boards and commissions become our independent voice on public policy? When the public does attend, are their efforts being acknowledged?

With  such a strong government response regarding public safety and its linkage with mental health, the lack of input from mental health consumers and the homeless at these meetings is particularly jarring.

I try to stay informed of mental health matters in my community. I’m sure I’m not alone. But are the public announcements reaching the people they’re intended for, and when they do, will the public come?

Like voting, to be counted, the public must be seen and heard at these public meetings.

I’m aware that the sheer number of  public hearings and meetings can be overwhelming. Not to mention attempting to locate and attend those scattered throughout the city or county, with many having overlapping times or dates.

Public notifications can be challenging without Internet access, and postings can be damaged by the weather or vandals. News periodicals are a great source of information, when they’re stocked. Public broadcasts on commercial-free local public stations are great, too, but you have to have a television or radio.

When I attend the ACMHB meetings, which are posted on the Alameda County Behavioral Health Care Services website, I rarely find individuals who identify as mental health consumers or family members in the audience. And even more rarely, do I hear any speak during public comments. 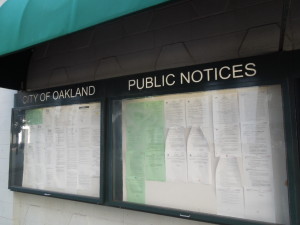 The BART’s CRB public announcement, which I discovered in The Oakland Post, invited the public to attend a presentation and report on the “AB 716 law that authorizes BART police to issue prohibition orders” to BART riders.

The announcement specifically reached out to individuals “advocating for those with mental health issues and the homeless,“ without actually inviting individuals identified as having mental illness or that are homeless.

I mentioned the AB 716 law to Edward C. Ford, 48, a homeless father of three small children, who had an encampment as large as a small studio, outside the entrance of the county administrative office.

I glanced at his makeshift bike repair shop on the sidewalk of 13th Street. “This is my transportation,” he said with outstretched arms.

“I wouldn’t go to any of those meetings,” he finally said as he pulled out a tire gas pump and continued to repair the frame of one of his three bikes on display. “They’ll listen but not give a shit. They push you to the side.”

To find the homeless, he said, you have to go where they’re at – post signs on lampposts and light 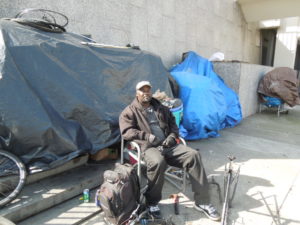 Edward C. Ford, 52, response to public policy “Show me your footwork. Do what you say.”

Frustrated, Ford believes there’s a lot of talk at the meetings, but little action behind the words. The issues have to speak to him and he has to be heard, he explains, speaking of past obstacles of obtaining employment and securing limited available housing. “Show me your footwork. Do what you say.”

Most of all, he simply asked that the “homeless just be given a chance.”

A chance can mean different things for different people, so diversity at public meetings is crucial.

But the public may be relying too heavily on the boards and commissions to be their independent voices.

Boards and commissions are the public’s information channel and their members – appointed by organizations, or elected public officials of the communities they serve – monitor, evaluate, and recommend policies and practices on behalf their constituents. 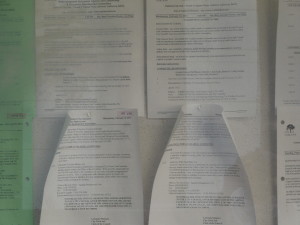 Because of many issues that are personal to me surrounding mental health and the law, I’ve had to do my own monitoring and evaluation of public policies and practices.

I’ve attended the meetings of the ACMHB and have heard presentations with topics specific to recovery.

Their presentations were informative, but weren’t a reflection of what I’ve witnessed in the eighteen years my loved one has cycled from one crisis to another.

But, as an exasperated family member, I’ve often wondered, is this supposed to be recovery-driven health care?

During public comments, I’ve addressed specific issues related to access to services, quality of care, billing issues, amongst other concerns that may in fact be system-wide.

It was difficult to get a public pulse on this issue as well since less than a handful of the public was there to express similar or dissimilar concerns.  The audience was composed mostly of BART Community Relations and Law Enforcement staff.

After hearing the presentation on the proposed implementation of AB 716, a female audience member expressed concern that individuals in the public could be targeted by BART staff and law enforcement through profiling, specifically mentioning the Oscar Grant tragedy.

The implications of law enforcement racially profiling, or criminalizing individuals experiencing a mental health crisis, or perceived to be homeless, are scary thoughts.

That’s why it’s vital from the start that the homeless, and individuals with mental health challenges, share their personal testimonies for creating effective, realistic outcomes.

I asked BART law enforcement whether they could reveal their process for distinguishing between individuals  intentionally breaking the law and someone experiencing a mental health crisis.

The officer gave assurances that they would use prudence in enforcing the law, but only time will tell how how the implementation of AB 716 will unfold.

The board discussed varying degrees of oversight and follow-up on key issues involving the public’s civil rights, yet they are limited in enforcement.

As much as I appreciate the presentations from the Alameda County Mental Health Board and the discussion at BART’s Citizen Review Board, the public must be the impetus, through their attendance and participation at boards and commissions, for the realization of changes in their lives by standing up and being heard.

We can make a difference.