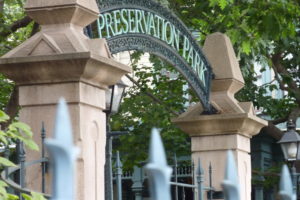 In the impeccably restored assembly hall of a Craftsman style theater in Oakland’s Preservation Park, genteel people gathered to address gun violence at a forum sponsored by the Oakland Tribune and the Maynard Institute.

A seven- or eight-year-old white boy, wearing $300 black “Beats By Dr. Dre” brand headphones, played an alien-attack video game on his iPod while his parents (presumably) and the audience of 60 or so mostly white attendees pondered Oakland’s persistent gun problem.

The forum’s panel consisted of a police sergeant, a lawyer, a reporter, and a preacher from a prominent Oakland church. The audience – or choir, if you will – appeared to be a relatively well-heeled assemblage of law-abiding Oakland denizens.

There were no representatives of the targeted group – the gun-toting bad guys – on the panel. And no one on the panel appeared to be under the age of 45. Many of Oakland’s gun-violence victims are teens and younger.

The gun forum  focused on gun sellers and looked at how the weapons wind up in the hands of people who use them to commit crimes. And the panel discussed police efforts and the obstacles they face in trying to deal with the problem of people killing people with guns.

One of those obstacles was said to be the reduction in the past several years of the number of police officers on the streets. However, the Oakland police sergeant on the panel was not asked to address the fact that the homicides rate was as high or even higher in the years when there were more officers on the street.

The panel didn’t really speak to what it would take to stop the shooting from a shooter’s perspective. Maybe it’s not realistic, safe or sensible to bring a bad ass to the table and get his views on stopping the gun violence. On the other hand, maybe a would-be criminal’s opinion on what it would take to make him stop shooting could give more insight into how to stop the killing.

Why not go straight to the source and ask what it would take to make the shooting stop? Why would someone like you spray into an innocent crowd of people? How does shooting someone improve your world? Just what the hell happened to make this a viable alternative?

Maybe the panel could include  some representatives from juvenile hall. Ask them some questions. How did you get that point to do what you did? What was it like growing up? Are you depressed? Have you ever had any type of treatment for depression or anger? Do you hate yourself?

Of course, it’s probably not very likely that some young gun blaster would entertain the idea of joining a police officer, lawyer, minister, and reporter on a stage in this small oasis of restored architecture, just across the freeway from West Oakland – an area of our city painfully familiar with gun violence.

It’s also unlikely that any of those panelists – all mannered professionals – would jump at the chance of sharing the stage with a gang banger.

In that case, maybe someone should hold a gun violence forum on the corner of 73rd and Bancroft. Or 98th and International. Or Foothill and Fruitvale. Just set up a table on the sidewalk and let the community speak.