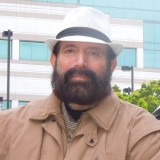 Howard Dyckoff has lived in Oakland for over 40 years and has been involved with many community groups, including Oakland Digital and Oakland Local, Block by Block, the East Oakland Boxing Association (EOBA), and CBE. A Brooklyn, New York, transplant, and an Aerospace Engineering graduate of NY Polytechnic, Howard also attended Laney College, where he wrote for the Laney Tower newspaper and was elected editor. Howard also attended the Starr King School at the Theological Union in Berkeley. He has served as the Berkeley Free Clinic’s Outreach Coordinator, and also worked as an information technology professional at Chevron, Sybase, and Wells Fargo. He worked in both the 2010 and 2020 Census. Howard has been a regular contributor to Oakland Local and online publications such as TechTarget and Linux Gazette and currently writes for Oakland Voices. He currently does event photography around the Bay Area.

Thanksgiving came early for unhoused East Oaklanders at more than 75 encampments with Feed the Hood 19 last weekend. More than 100 volunteers were involved[Read more]
We gathered the latest info on vaccines.
The city is holding a special meeting tomorrow to address the new A's ballpark plans near the waterfront.
Editor’s Note: Oakland Voices alumnus and correspondent Howard Dyckoff is in the vulnerable age category for COVID-19. He worked inside an office during the pandemic[Read more]
Plus, more news you can use about the COVID vaccine Alameda County opened its first community-based COVID-19 vaccination site at Fremont High School in East[Read more]
Starting this week, some Oakland seniors 65 and older — alongside food and agriculture essential workers, emergency workers, and education and childcare workers — will[Read more]
Information on vaccine roll-out in Oakland and beyond.
Doctors, nurses, and other healthcare and frontline workers in Oakland have begun receiving the COVID-19 vaccine.
Amid whoops and cheers and a cacophony of car horns, Oaklanders came out to celebrate the election victory of Joe Biden and Kamala Harris in[Read more]
With a waterfront ballpark moving closer to an Oakland reality, City government has launched an effort to bring community and business stakeholders together and also[Read more]