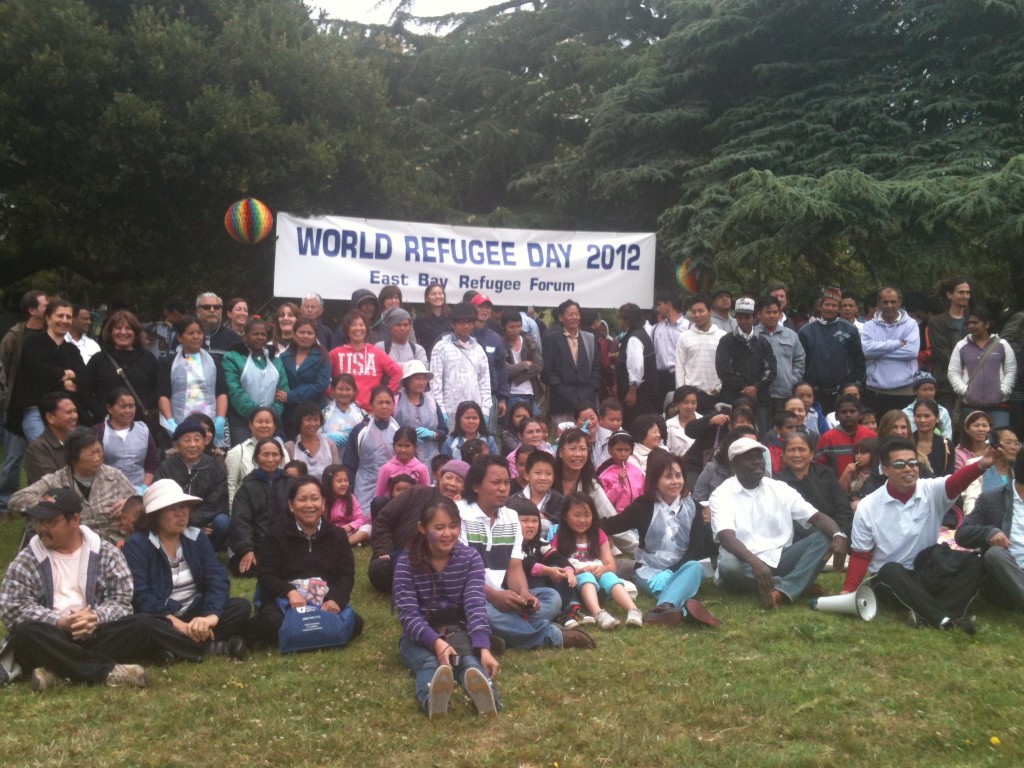 Eritrean food and Burmese dancers were just a couple of the attractions at Oakland’s World Refugee Day event on June 22nd.  At this annual event, hosted by the East Bay Refugee Forum and held in San Antonio Park, refugees came together with teachers, aid organizations and local cultural groups to acknowledge the hurdles they have overcome to settle in America, and to share their cultures in this free celebration open to all.

The celebration was kicked-off by a call for a group photo under the World Refugee Day banner, and one of the refugees shouting, “Long live World Refugee Day!  May you all have peace and happiness in your life!”

Salai Tluang Vel Lian stood on the park lawn, listening to a group play music from his homeland Myanmar (Burma).  He first escaped from Myanmar in 1991, because he was being persecuted for his Christian beliefs. He arrived in Oakland 2 years ago.
Initially Salai went to India, where he spent six years studying English in New Delhi.  He later got a job as a United Nations translator in Malaysia. Through contacts he made there with the Department of Homeland Security officials, Lian was able to come to the US and reunite with his siblings living in Oakland.

His mother and one brother still live in Myanmar, where Salai fears for their safety.  “If you are involved in politics or religion, (the government) will bother you.” He hopes to see them again some day but does not know when. 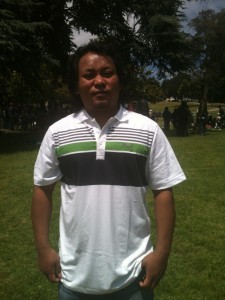 Salai Tluang Vel Lian escaped from Myanmar (Burma) in 1991, because he was being persecuted for his Christian beliefs. He has lived in Oakland for 2 years. By Debora Gordon, Oakland Voices 2012

Of about 80,000 refugees and 45,000 asylees who come to the U.S. each year, about 10,000 arrive in California according to the  California Regfugee Programs Bureau.  Of those, there are about 1000 refugees (those who had visas to come here) and asylees (those who sought asylum after arriving) in Alameda, with many settling in Oakland.

Almost all refugees and asylees left their homes, often their families, businesses, work, studies and lives, with only what they could carry.  They left because of war, human rights violations, torture, religious persecution, ethnic cleansing, forced military conscription, and threat or action of government-sponsored violence.

Oakland is one of many cities around the world where refugees and asylees often settle. Because Oakland is already home to immigrants from all over the world, newly arrived refugees can often find compatriots from their homelands who can help them navigate the unfamiliar and strange ways of life in America.

Blythe Raphael, coordinator of the East Bay Refugee forum said, “ The current ethnic profile of refugees in Alameda County in order of greatest to least number are: Burmese, Bhutanese,Eritrea, Somalis, Iraqi, Afghanis, and Sri Lankans. Asylees hail from all over the world. This is a dynamic population, most admirable for their resilience and ability to overcome obstacles to begin new lives inOakland. The World Refugee Day celebration in the humble venue of San Antonio Park each year is a testament to that fact.”

Shirley Chau attended the event. She escaped from Vietnam at the age of 33, as one of the so-called “boat people” in 1979. Shirley left with nothing but the clothes she was wearing, arriving first at a refugee camp in Malaysia. “There was nothing there,” she told me, “except the Red Cross.”

She spent nine months there before being sponsored to come to Oakland by a sister who had escaped earlier to the US.

Shirley said she has more freedom here and life is much better. Now she works as a receptionist for a charity on International Boulevard.   “I enjoy USA a lot.”

Now 66 years old, Shirley has no plans to visit Vietnam again, although a sister is still there.  “I stay here now,” she said. 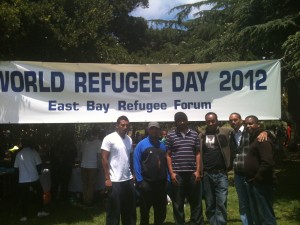 Some of asylum-seekers who gathered for World Refugee Day said they now dedicate their time to helping refugees resettle – the kind of help they needed when they were recent immigrants.

For the last 3 years, Salai Tluang Vel Lian has worked in Oakland for Catholic Charities of the East Bay. Getting adjusted to life in the US can be daunting, so he’s proud to be a resource. “Most people from Myanmar come from small villages, where there is barely even electricity.”

Yonas Woldeab is a volunteer project coordinator for Eritrean Youth for Change (EYC), which aids newly arrived Eritrean refugees and asylees.  Having escaped from Eritrea himself after years of unpaid forced conscription in the National Service, he is well-suited to help new refugees get settled.

Yonas finally made the decision to escape across the border to Sudan, leaving behind his family and his girlfriend, to whom he has not spoken in more than 10 years.  He eventually sought and received asylum in the US, and settled in North Carolina.

He said that he cannot see a time when he could go back to see his family, because returning to Eritrea would very likely mean torture, imprisonment and even execution.   His father is still there but they cannot communicate directly because of government wiretapping.  He said families of escapees are often fined up to $3,300.

Yonas also hasn’t spoken to his girlfriend since he left Eritrea, but said “she has a place in my heart.”  He has heard through the grapevine that she sometimes asks about him.

Yonas moved to Oakland about a year ago.  In addition to his volunteer work with the EYC, he works as a security guard at night.  He  enjoys living in Oakland.  “I like the international community,” he said, gesturing around the World Refugee Day gathering, “and the weather.”

Now 38 years old, Yonas plans to remain in Oakland for the foreseeable future.  “This is my best choice,” he said. 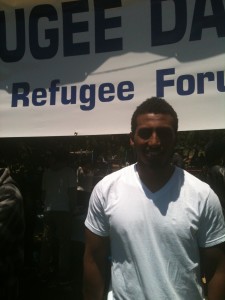 Senay Gridei also escaped from Eritrean National Service when he and three others fled on foot into Sudan.

It took Senay says the eight- day journey was “very scary.” They were stranded for hours after a paid guide abandoned them.

A second guide got them to Khartoum, where Sinay was fortunate to have friends he could stay with while he waited for papers authorizing him to immigrate to the US.  He arrived first in Washington D.C., and has been in Oakland for four years.

Senay has supported himself working as a valet while also studying biology at Laney College.  He has been accepted to UC-Davis for the fall semester, where he plans to complete his degree in biology before applying to medical school.

Senay has been very happy here.  “I love Oakland,” he says with a warm smile.

Myanmar refugee Salai Tluang Vel Lian places some hope in Aung San Suu Kyi’s recent election to Myanmar’s parliament.  “We trust her,” he said, “but the reality may be difficult. How far we can go, we do not know.”  He paused, and added, finally, “They closed the door, but now the window is open.”

Here in Oakland, the door is open for refugees seeking better lives.  Life is not necessarily that easy  for refugees in the city, but for most, it is a safe haven from the violence and persecution left behind  in homes they may never be able to visit again.

Although there are challenges of many kinds, including some discrimination against immigrants, many feel that Oakland lays out the welcome mat for them, with organizations like Refugee Transitions, the African Advocacy Network, the East Bay Community Law Center and the Lao Family Community Center, providing assistance in finding a home and a new way of life in Oakland.