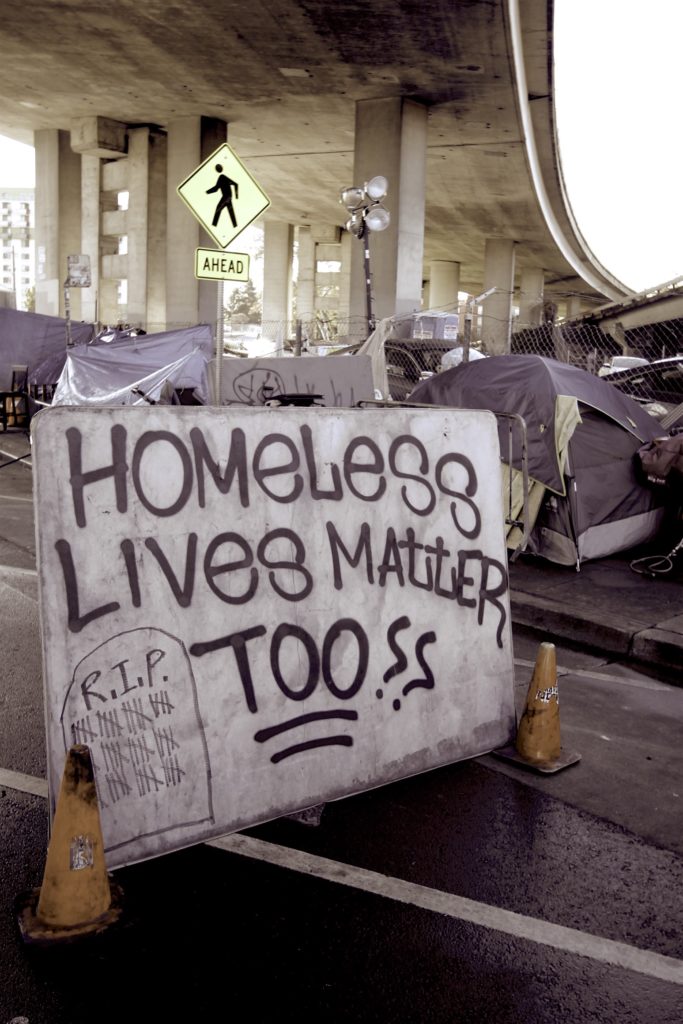 Emergency lights flashed in an underpass filled with fire trucks, police cars, and ambulances. Paramedics and firemen hovered over an unidentifiable body laying out in the middle of the street. This is what I witnessed, slowly driving by 27th St and Northgate. A black Buick crashed, upside down. 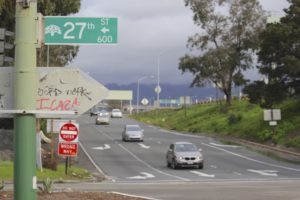 Reckless driving was the original reason for the CHP to flash their lights at Nicholas Turrentine, 32, of Oakland to  get him to stop near the exit off 27th St. Instead he tried to flee and crashed into a homeless camp, injuring two people. Turrentine, who was apprehended, suffered minor injuries.  Brass knuckles and a handgun were allegedly in his vehicle as he unsuccessfully sped from the law.

Two women in Turrentine’s black Buick were released by authorities without major injury after a statement.

“That was the craziest sound I’ve ever heard.” 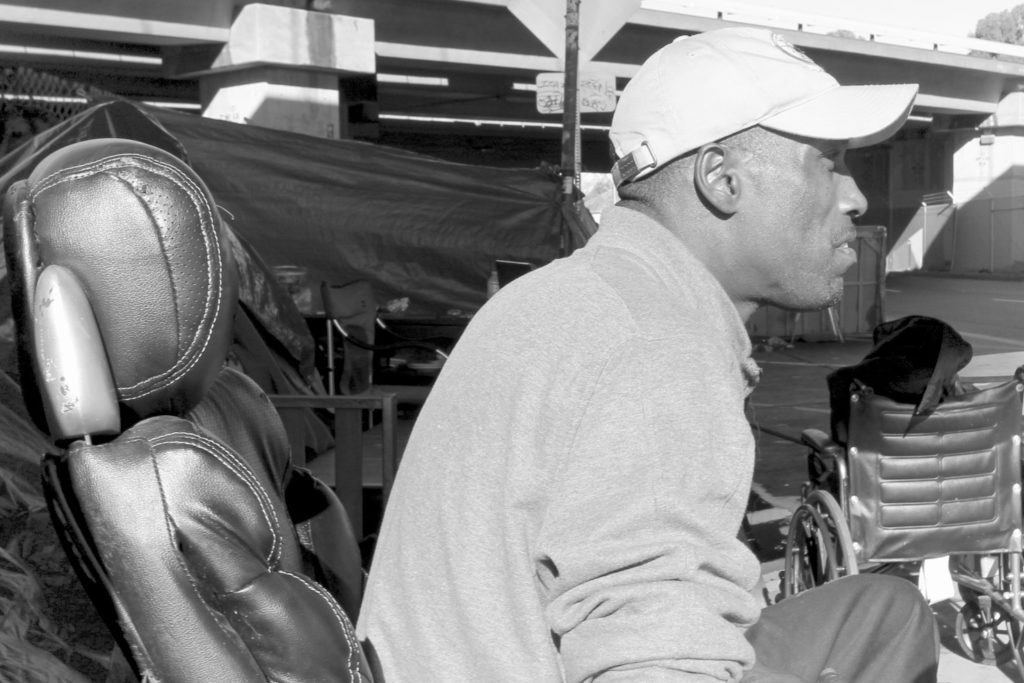 Sean Moses, an advocate for traffic safety at homeless camps, is a long time resident of the Northgate and 27th St. camp in Oakland. He is still mourning the death of two friends killed in traffic accidents there.

Sean Moses recalled the crash,  insisting that the CHP officer caused Turrentine’s car to flip into the homeless camp after speeding down the 27th St. exit.
He lives at the camp at Northgate and 27th and  works by selling the homeless paper, “Street Sheet.” Moses is a self-appointed advocate for the camp’s safety.

“He fishtailed him,” Moses shouted repeatedly. “He fishtailed him!” Moses believes that a fishtailing procedure, when a car is swiped from the rear by another car, is what caused the suspect to land upside down into the homeless camp and injure two people there on the night in question. Moses said one of the injured was a pregnant woman who lived at the camp. 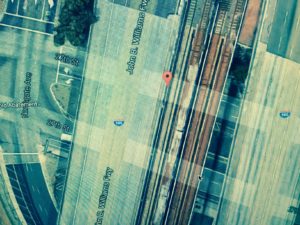 Location of the camp

Moses also maintains that the CHP could have been more cautious by waiting to use the fishtail procedure until they were farther away from the homeless camp.

CHP officers are trained in methods of ending car chases, including proper fishtailing procedures. But whether the CHP officer did or did not use proper procedures is still in question to some people at the homeless camp.

The official CHP version said: The driver lost control of the Buick causing it to go onto the sidewalk and somehow land upside down onto a homeless encampment.

To understand why the fishtailing incident is so important to Moses, it’s necessary to look at the dangers faced daily by homeless people living in the camp where the incident took place. This particular camp is filled with primarily people of color and a majority are black. 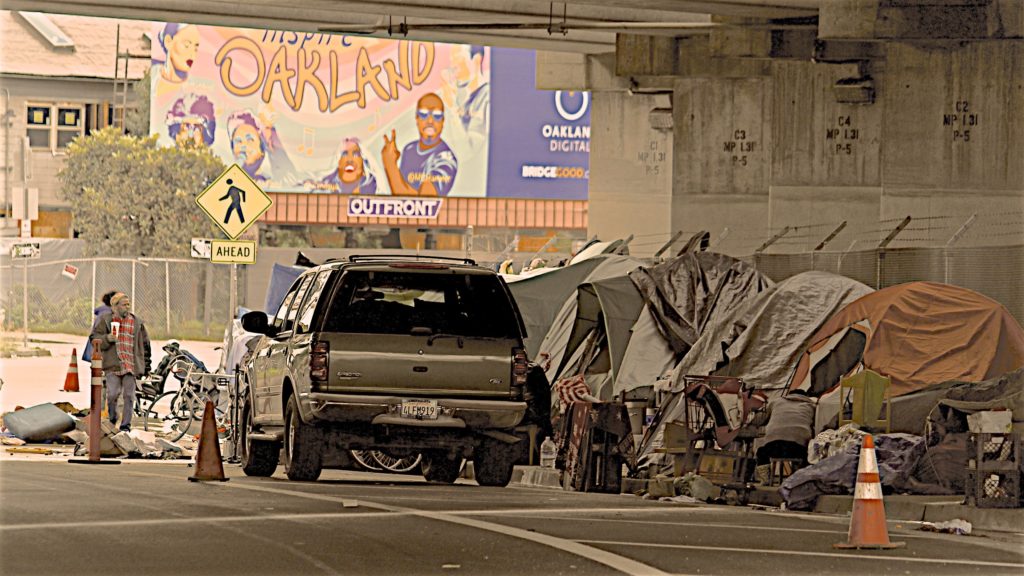 Daily life at the Northgate and 27th St. homeless camp in Oakland.

Moses raises the ire of many drivers as he tries to slow down traffic going through the camp, waving his hands or giving them a stern look. Some people seem to be visually bothered by the camp site and view him and it as a public nuisance – drivers casually roll their eyes and clandestinely question the reason for the site’s existence.

Moses is only focused on the camp’s safety in dodging wayward vehicles and oncoming traffic. The cantankerous nature of the site’s foes ranks low on Moses’ list of priorities in comparison to the non- stop reality of surviving homelessness and possibly being victimized by a murderous vehicle.

“Anthony and Chocolate are the inspiration behind the Homeless Lives Matter sign,” Moses says to me. He’s seated outside on a black leather office chair at the Northgate camp, his focus locked in on cars, trucks, and vans, passing by. 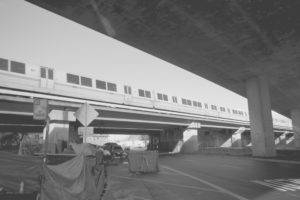 A BART train runs adjacent to the freeway underpass –
above a homeless camp on Northgate St.

He remains homeless but vigilant. BART trains are hustling by – up high – next to the freeway, fading into a blocked skyline. The non- stop sounds of traffic that homeless people are forced to listen to at the camp have left some naturally unsettled. 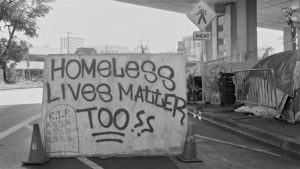 A “Homeless Lives Matter,” sign is placed in a location to move oncoming traffic farther away from the camp, which has commandeered the sidewalk. Studies indicate homeless people are at risk of death or injury due to traffic accidents at a significantly higher rate.

The sign attempts to protect them from hit and runs. But protection from further accidents on Northgate and 27th St in Oakland is only wishful thinking for Moses, and their campsite, it seems.

“Anthony and his girlfriend Chocolate died here three years ago.”
Moses repeats the information, in spite of  broken teeth and a weathered voice – his voice is barely heard above the constant sounds of cars and BART trains moving to their varied destinations. Many people riding by on trains and cars are somehow oblivious to Moses’ daily deathly survival games. 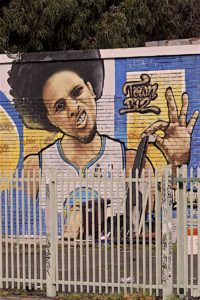 A mural of Steph Curry is one block away from Sean Moses’ homeless camp in Oakland.

Near the same freeway exit Turrentine allegedly drove down, Steph Curry’s image and likeness is making a “Thizz Face,” on a blue and yellow mural covering an abandoned wall.  The questions Mr. Sean Moses from the homeless camp wants the City of Oakland to answer are not about Steph Curry and the future of the Golden State Warriors. His questions are in memory of his dear friends, Anthony and Chocolate, and for the victims of the New Year’s Day crash. Parenthetically, (do) Homeless Lives Matter?