Thirty six people died in Oakland’s most horrific fire on Friday December 2, 2016. This is a story about photojournalism and two rules of spirituality I observed while reporting on the tragedy of the Ghost Ship Warehouse.

Never make assumptions and always do your best: two of the four agreements from the best selling book titled The Four Agreements by Don Luis Ruiz.

Always Do Your Best

“When they go low we go high” someone posted online.
Michelle Obama’s subliminal come back to Donald Trump’s tweets about
her husband…That’s it! I thought to myself. I. Can. Go. Higher…

Five days before the magazine hits stands and in lieu of an impending deadline, I was attempting to seize next week’s cover with the help of a ladder.

Crushing an eight- foot steel ladder into a small black vehicle, I drove to the Ghost Ship Warehouse in the Fruitvale District. Dashing from the tool lending library in North Oakland. Another photographer may have a more expensive camera, more connections, and more years of experience I thought – but at least I could use my idea to get on top of a ladder to shoot the scene from a much higher angle.

The editors had rejected my original photo pitch for the cover after much back and forth, and it didn’t look like this last audition of a last- second photo shoot would change their minds. My stress was palpable. 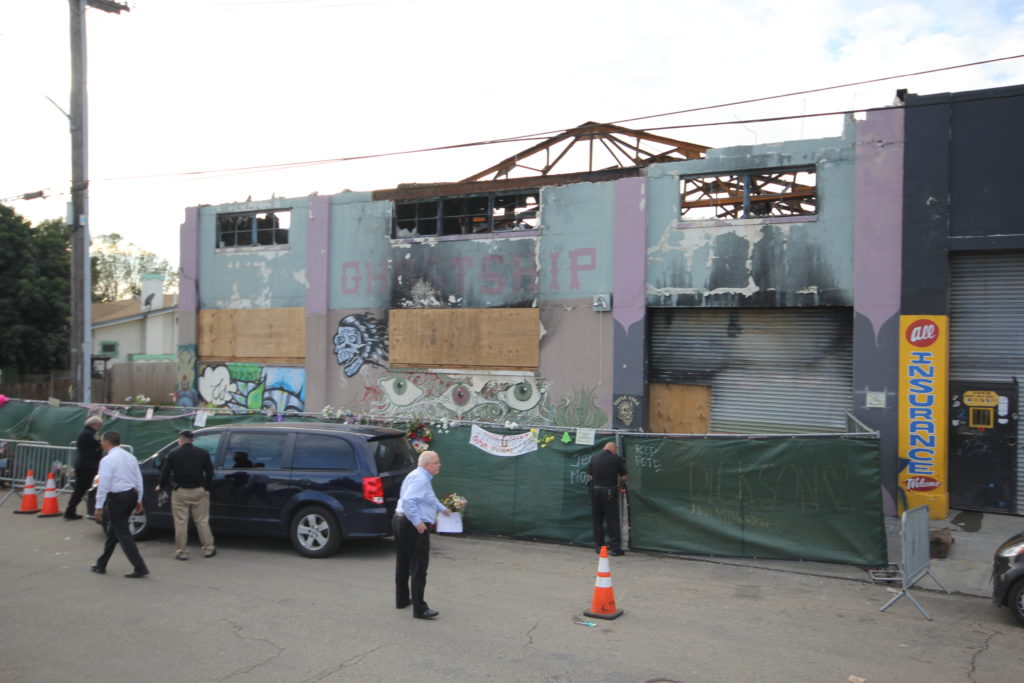 People of the Fruitvale, a mainly Latino neighborhood, watched me for hours inquisitively trying to get the pictures of the Ghost Ship Warehouse from every possible perspective. All the media trucks and reporters were long gone and it was just me out there all alone.

Scouted by alleged dope fiends and potential robbers salivating at the chance to take advantage of my blind spots and busy hands. They were hoping I would bother with my ladder just long enough to forget about my bag of expensive equipment. A young muralist was recently robbed and killed for a similar type of camera in West Oakland and his image held steady in my mind as I stood my ground.

Through security officers, police investigators requested me to not take pictures of the investigators putting something that looked like human remains into a long black car. I only held back for respect of the dead, but maybe a more shark of a reporter would’ve pounced at the short public display of covered remains like fresh blood in the water.
“The Constitution. Have you read it?!” I shouted to all in earshot while being evil-eyed by the police who happened to be there investigating the Ghost Ship case that day. I became defensive about the Constitution and my rights as a citizen to practice photojournalism. They backed off.

Whatever the outcome of this wild impromptu photoshoot I thought, at least I did my best. But the editors gave me no assurances that it would matter in the end.

Before I could grab the ladder out of my car; two young women walked over from the Wendy’s parking lot across the street and walked directly to that spot in the middle of all the chaos of the fire. I quickly changed to a wide angle lens and snuck in behind them, running fast while holding the camera as steady as possible, hoping the two wouldn’t move from the front of the building out of fear of me running up behind them. I took the shot. The click of my camera disturbed the silence of the moment and they moved on quickly like two shy cats I had gotten too close to.

One shot was all I was able to take before they strolled away. I didn’t think too much of it after that. 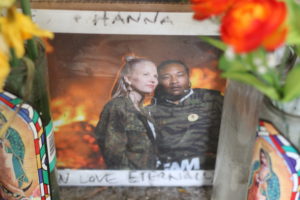 A couple killed in the fire

Full of doubts about the outcome of the pictures, I drove to a cafe by the lake in Oakland, looking for an East Bay Express. I didn’t believe the editors would choose any pictures I sent, even with an eight-foot ladder. In fact, when I emailed the editors, I never heard any word back on what they thought about the new photos. I was sure they had not acquired any pictures from last Friday’s shoot and it had all been a waste of time. In fact, none of the images I took with a ladder on that day appeared on newsstands. None at all.
However, when I finally arrived at a newsstand in the early morning I was surprised. Unpredictably. The unplanned photograph of the two young women was chosen for the cover. The only one taken without a ladder. And for me, the spiritual aspects of this picture have to be reckoned with. 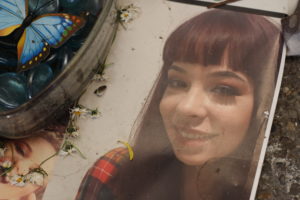 What did I learn that day?
My assumption was that I would never take a picture better than what was already rejected by the editors for the front page.That time had moved on and all emotions of the mourners would be gone or muted by then. Or maybe the editors had some other photographer in mind and I was hopelessly in an exercise of futility. I believed I walked for three hours in the sun carrying a ladder above my head to capture a moment gone for naught.

As long as there’s a shot in life to take – take it whenever possible. Don’t complain, just go for the extra metaphorical shot if need be. Even when you cannot see how it will all unfold in the end. When you love what you do. Be impeccable with your craft.
You may get 1,000 nos but sometimes all you need in life is just one – long – delayed – yes.

These are lessons in photojournalism and principles of spirituality I observed in The Four Agreements while reporting the Ghost Ship tragedy. A condensed version of my original story with Oakland Voice’s also appeared in the East Bay Express that week as well, respectfully.