East Oakland is considered a food desert. A food desert–according to the USDA (U.S. Department of Agriculture)–is defined as a “low-access community” where at least 500 people or 33 percent of the census tract’s population live more than one mile from a supermarket.

And perhaps because East Oakland is a food desert, taco trucks predominate the area. People of all races and economic backgrounds have come to the taco trucks in the Fruitvale since they first popped up in the ’80s. Musicians looking for a quick bite after a show or local residents looking for hot meal to take the edge off an empty stomach line up to place their orders at the trucks. There’s a good chance some of the Ghost Ship fire victims and survivors patronized the Fruitvale food trucks while living in East Oakland because these trucks have been part of the community for decades. 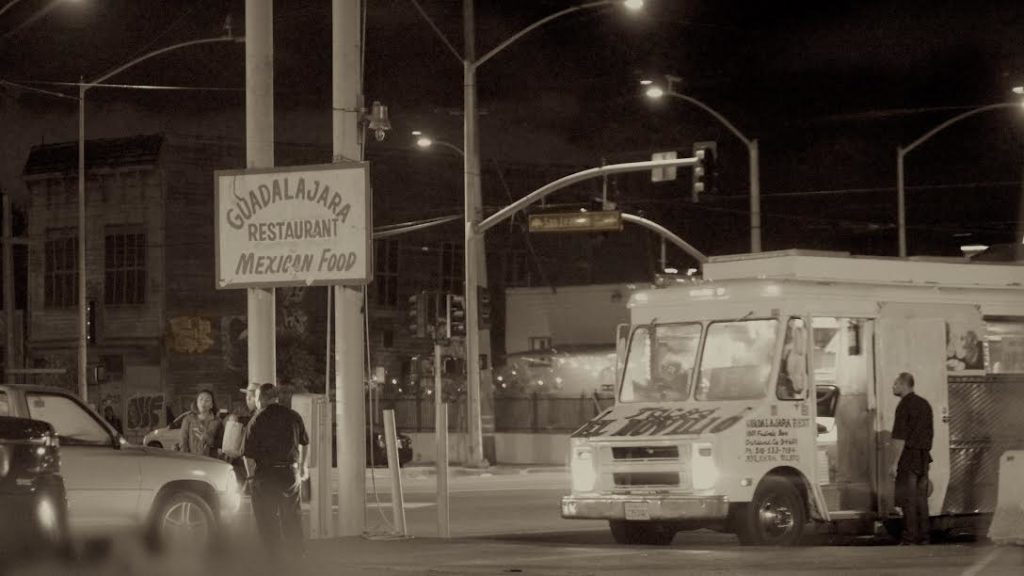 “Forty-first and International is what I fux with: Guadalajara!” my friend Corey Johnson shoots back to me when I ask him about his legendary taco truck cravings. Corey is a member of the Hip Hop group Living Legends and co-writer and director of a newly released film “She’s Got A Plan,” who goes by his alter-ego name Sunspot Jonz. When I ask him about tips on taco trucks, he responds in his own type of linguistics: “Make sure the red sauce is right, or I ain’t (%#^%….) with it!”

As a self-proclaimed god of taco trucks in East of Oakland, his religiosity and dedication to taco trucks is amusing to his thousands of fans, who follow his daily routine which includes grabbing a taco from the truck on International Boulevard after a flight from L.A. to care for his mother in Oakland. “Not gonna lie,” he tells earnestly, “I’ll probably hit the taco trucks on International twice today.”

Taco trucks around International Blvd in Oakland tell the story of an underserved community. People line up to order grilled tacos with lemon, lime, chopped tomatoes with onions, cilantro and spices topped by red or green sauce at almost any time of night. The trucks are one of the few places an East Oakland resident can get a filling meal inexpensively and freshly cooked.

In the Bay Area, where a family of four making less than $100,000 per year is now officially recognized by the federal government to be existing below the poverty line, the quick and inexpensive options at a taco truck are appealing. But in the last few years, even taco trucks have fallen prey to gentrification. Designer (meaning expensive) food trucks seem to mark the territory in areas to signal gentrification has arrived. Real estate developers want the allure of fancy food trucks to attract residents in their newly-built condos, but residents who feel that pressure just want to be undisturbed and be allowed to keep their place at the table.

I never rode the wave of a foodie within the world of trendy food trucks because to me they all looked like bootlegged versions of what I grew up driving by on International Boulevard. It was only during my time reporting on the Ghost Ship tragedy that I really began to pay attention to the unique role of the food trucks of East Oakland streets. I noticed how they served as fueling stations for everyday people in an economic struggle. 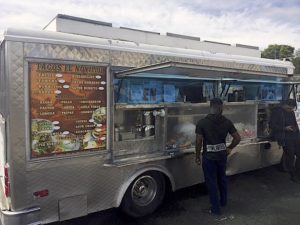 Local day laborers at Fruitvale and East 12th street use their last two bucks on a taco to power them through the demanding physical labor required in their likely uninsured labor. Even sex workers, with sore feet and tired walks wait in their high heels for a meal at the taco trucks on International Boulevard. For them, it’s a place where they don’t feel judged or shamed, despite their late-night uniforms.

These are not the people you’ll see waiting in long-lines at the trendy stalls of food trucks. There are no thousand-dollar baby strollers and famous chefs with culinary-school degrees or even high-tech investors of food trucks waiting in the lines at the trucks on East 14th Street. And you’ll never find these East Oakland food trucks holding a regular spot at an “Off the Grid” food truck stall peppered throughout the Bay. These trucks don’t have that kind of access. 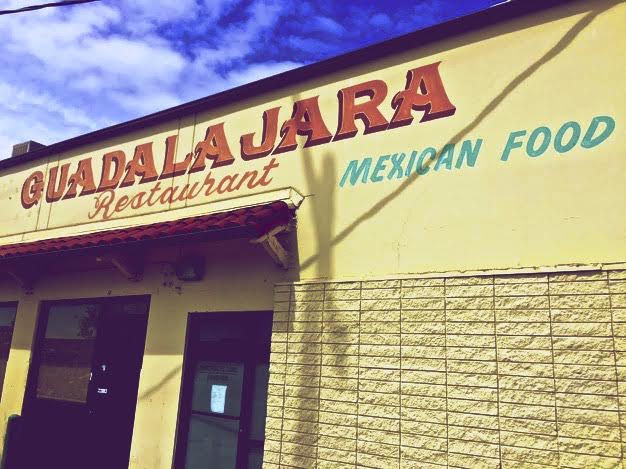 Guadalajara Restaurant (one block below East 12th on Fruitvale) started out as a taco truck. And over time, the owners expanded it to a sit -down restaurant with their taco truck parked outside for to-go orders. That’s how popular it is. I spent election night in November with District Five’s candidate Viola Gonzales at Guadalajara, totally unaware of their inspirational “truck to brick-and-mortar restaurant” story. I learned how places like Guadalajara serve as spots for political organizing for their community, bringing members of the community together, tied by a common appreciation for nice and good food. Their need will become greater in the days of 45’s presidency, given the threat of his illegal immigration policies against people in places such as East Oakland.

But even these spots are not totally without blemish. Violence and robberies continue to be an issue for food trucks in East Oakland. At one point, robberies at gunpoint happened to trucks so often they would not even report the crime given that police would show up far too long after the robbery or never investigate the crime fully.

Chaos and tragedy peaked in the taco truck community when a young 5-year-old child was shot and killed by a stray bullet on New Year’s eve in 2012 while his father, Gabriel Martinez,  worked inside of his truck nearby on International Blvd. His son Gabrielito died in his arms. Years later, Martinez still works on the same corner inside the same food truck where people loyally line up for food. As a result of the mounting violence, the trucks of East Oakland have since gathered their resources and pitched in for private security. 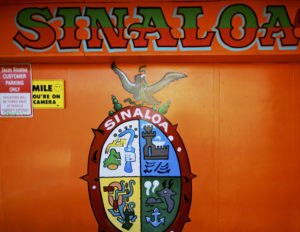 While preparing to shoot some photographs of the Ghost Ship ruins for the East Bay Express, I used sign language to order a taco, flashing a “number 2” to the cook to let him know what kind of taco I wanted. I asked him if the neighborhood or even his clientele had changed since the fire, which happened just around the corner from his truck. Seemingly gun shy about my question, he shut me down with his answer, “I don’t know, the same.” He was eager to end the conversation.

His truck, Tacos Sinaloa, parked kitty-corner to the Fruitvale Bart Station, has probably seen it all. And after a while it is all the same: one order at a time, serving people who are all struggling with life and death situations and just trying to make it. But in the meantime, he will still be there each day serving people an unlimited amount fresh tacos. And for him and his community he serves, yes, it will all be “the same.” 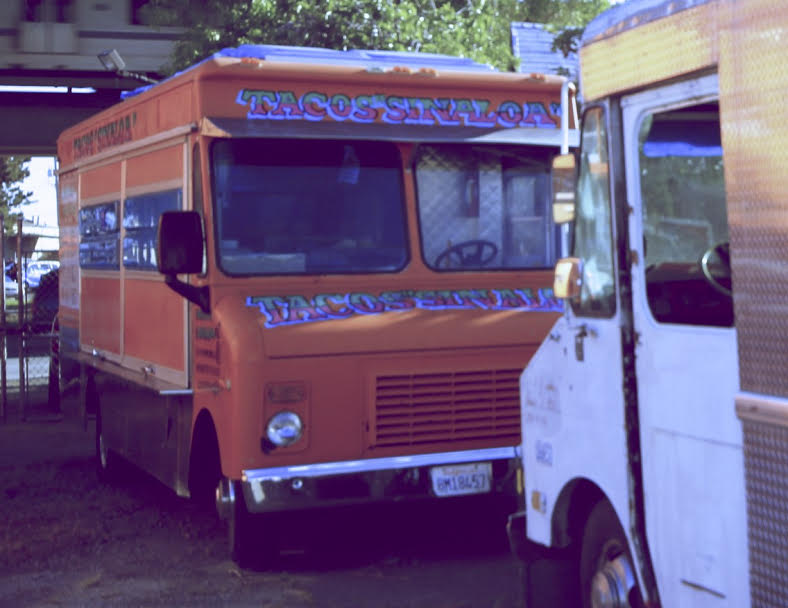