Oakland’s Women’s March: A March and Rally for Equality, Inclusiveness, and Tolerance

On the day after the inauguration of President Donald Trump, about 100,000 people march through Oakland from Chinatown to City Hall and gather in and around Frank Ogawa Plaza for a rally.

There are so many people, the crowd spills over, filling surrounding streets. 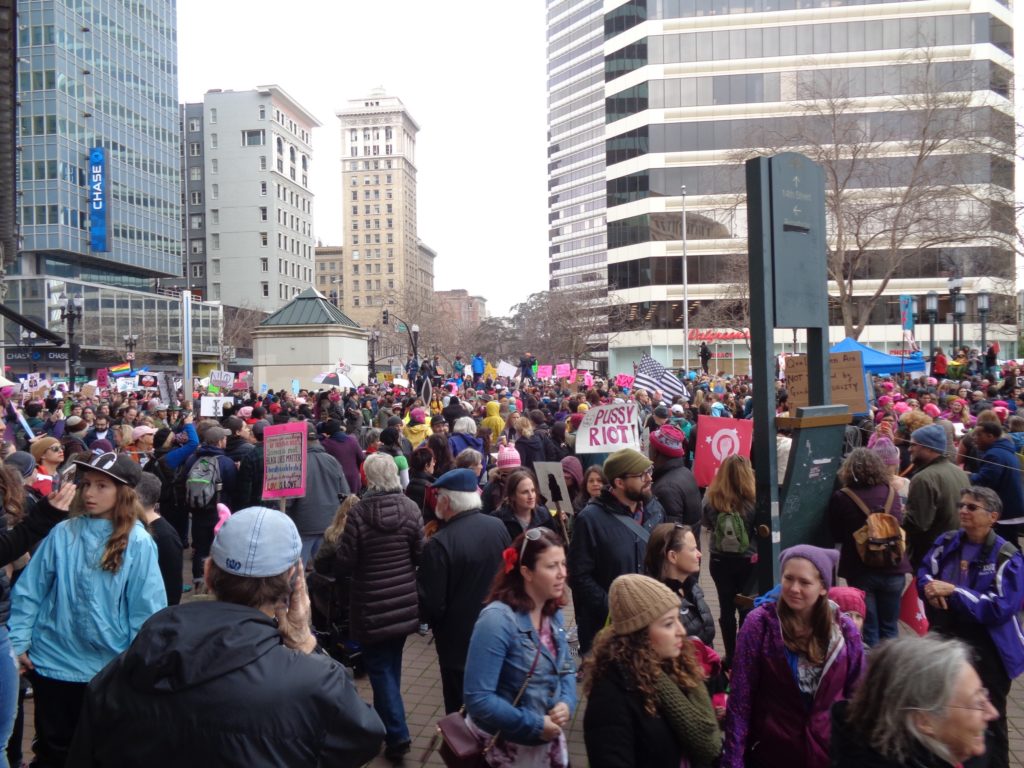 The crowds are so big that marchers spill into neighboring streets

Hundreds of thousands participate in the Oakland march

The march is frequently brought to a standstill because of the mass of people. It is a peaceful, good-natured, but purposeful protest.

Some people anticipated that the march would be a white women’s march, but it’s much more than that. There are lots of women of all ages and ethnic backgrounds, but there are also lots of men and trans people marching with them. Children. Extended families. Groups of friends and colleagues. 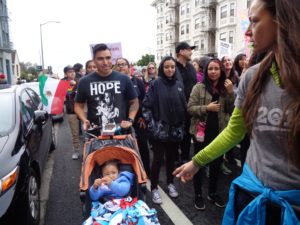 Families participate in the march

It doesn’t feel so much like a women’s march, but a march for equality, inclusiveness, and tolerance. The marchers are telling President Trump that they do not support his ugly and pessimistic view of the U.S.

Young men and women from Democratic Socialists of America are marching in a group. They move into an intersection and chant, Fighting for Jobs and Education, Not for Raids and Deportation. When they chant We Don’t Want Your Tiny Hands Anywhere Near Our Underpants, laughter and cheers erupt from the crowd marching past them. 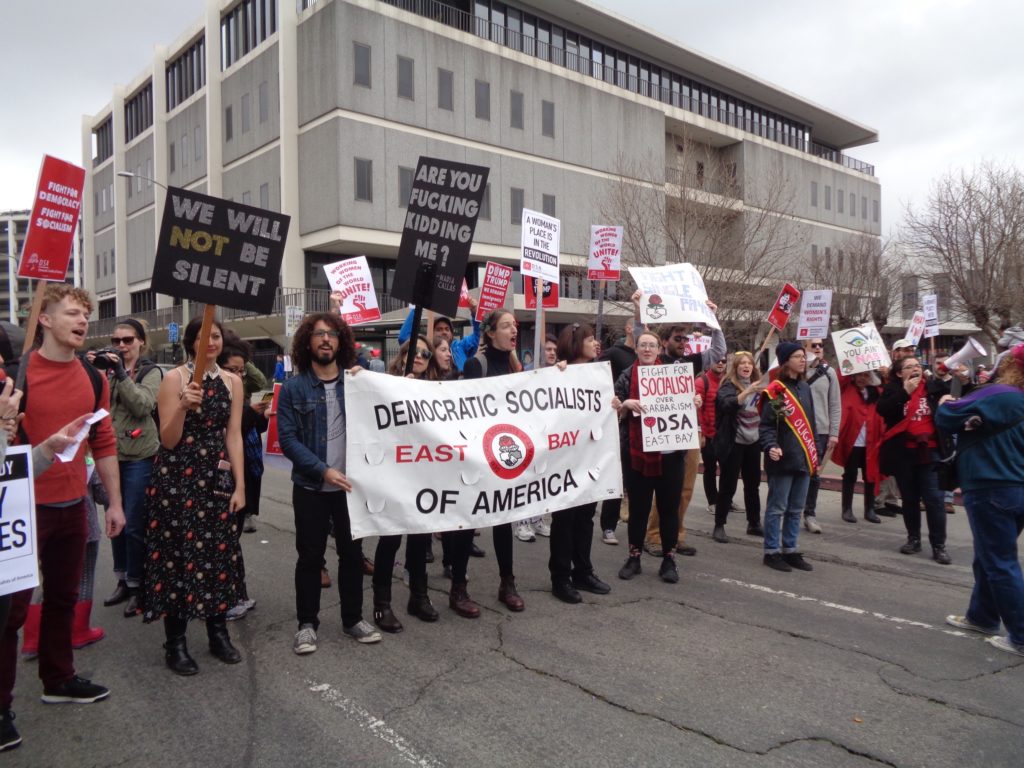 Democratic Socialists of America, with their banner,leading chants)

I talk with two young Black women holding signs. “I feel like this is a fight for everyone,” says Zendra Hines. Leslie Lindo nods in agreement and adds, “We can only transform things when we work from the bottom up.” 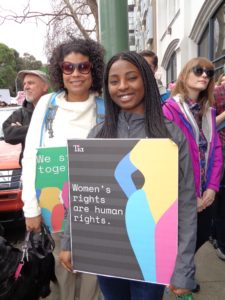 Islam is a Religion of Peace

No Human Is Illegal 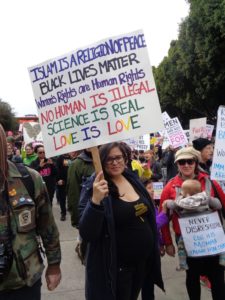 A large group from Filipino Advocates for Justice, several rows deep and filling the street, comes towards me. “We want our voices to be heard and we want to build power in our communities and across communities,” Fred Pinguel tells me. 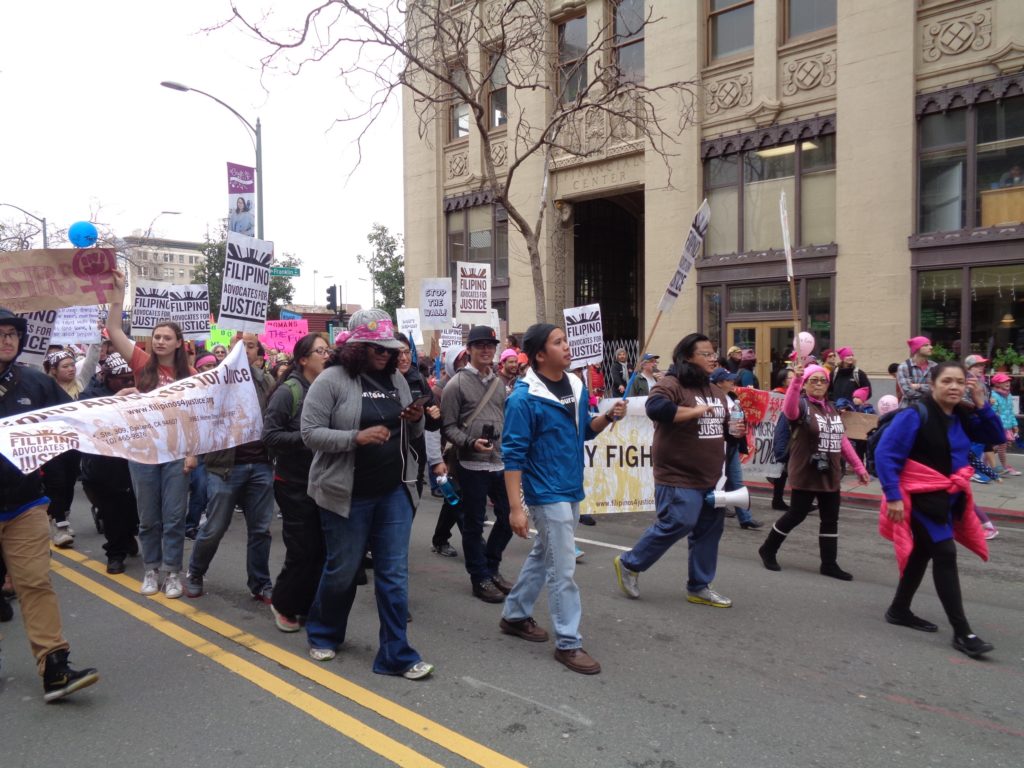 Marchers from Filipino Advocates for Justice

I’m near the 12th Street BART station, trying to make my way to the plaza, but it’s impossible to get through. Another marcher, Kameko Shibata, is trying to do the same and she eventually finds a gap and begins to make her way through the throng of people. I follow her. It feels like we’re walking through a maze or a tunnel of people who welcome and help us through. “I’m here because it’s better to be together than alone in these times,” says Shibata and then paraphrases a Cornel West quote, “Justice is what love looks like in public.”

Long after marchers have begun gathering in the plaza, people are still crowding into Frank Ogawa Plaza and its surrounding streets. It’s a bit like the Bay to Breakers race in San Francisco each May, when runners at the start finish the race before many of the runners and walkers at the back have even reached the starting line.

On the stage, Carolyn Woodson introduces the speakers and performers; she wasn’t scheduled to act as MC, but took over when the MC didn’t arrive. She introduces former Black Panther chairperson, Elaine Brown, who energizes the crowd.

“People power! It’s time for us to get up. We’ve been asleep. Trump is carrying on a tradition that goes back to Thomas Jefferson. It’s time for revolution,” Brown says.

“I’m glad we’ve come out of our own deep sleep,” Brown tells me later. “This is a galvanizing moment, like the Civil Rights and Vietnam War movements.” 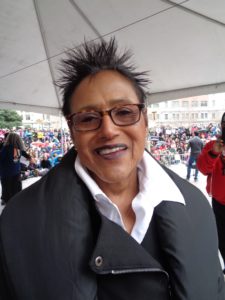 About halfway through the rally, Woodson says to the crowd: “I want to speak directly to the youth. Listen to the soundtrack that’s playing. Stay vigilant. Be active. Stand up for what you believe in. Stand up to injustice. Stay curious. And respect your fellow man. You are our future. March in the spirit of Martin Luther King, Jr. In 2020, when you have a chance to vote in your first election, pay attention to the politicians. And remember. You are not forgotten.” 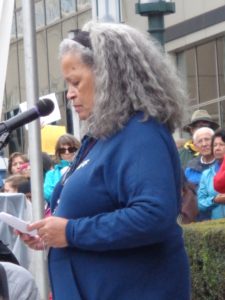 Moina Shaiq, one of the founders of Meet a Muslim, comes to the stage, wearing hijab. “Muslims are afraid. We are afraid when we talk in our mother tongue at the airport. Will we be arrested? Will we be sent back home? Which home? This is our home. Muslims are against ISIS because ISIS is disenfranchising us. They want you to hate us. We want you to love us.”

“We love you!” call out many people in response. 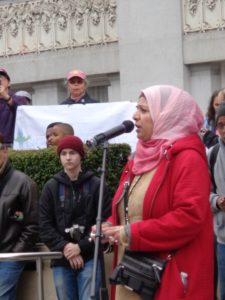 Moina Shaiq speaking at the rally

A helicopter is hovering over the plaza, its blades rat-a-tat-tatting, disturbing the joyful call and response of the speakers and audience.

As I’m walking to my car parked almost a mile away at Laney College, I meet Edith Alanis and her daughter, Ashleigh Richelle. Edith is wearing a T-shirt with the message No Immigrant Is Illegal in three languages: Spanish, Arabic, and English. 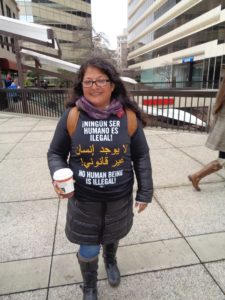 Edith Alanis at the rally

Like all the people I’ve spoken with today, on the march and at the rally, Edith and her daughter are happy that they came out, to be part of such a positive and successful march and rally.