Dogs and minimizing force;
Oscar Grant.
However peace is possible..

“My name is Uncle Bobby, the uncle of Oscar Grant, of course, Oscar’s mother Wanda is my sister.” Cephus Johnson is Uncle Bobby, and the “minimal use of force” policy is Oscar Grant’s family best hope of peace today.
BART police and their supporters are lobbying heavily for the word “reasonable,”rather than “minimal.”

Uncle Bobby is allowed his turn to speak at this BART board meeting, he stands up in a suit, white shirt, and dark brown complexion. He drives here tired or not after work from San Jose for BART board meetings in Oakland, since the incident, driving from San Jose to Oakland is part of his normal routine. He is allotted three precious minutes to speak. They remind him of his time, as if they know his face, his presence at meetings is another reminder to BART that Oscar is gone.

When Uncle Bobby speaks, we all quietly search for resemblances of the beanie headed picture of a black boy smiling. His voice is highly pitched, straightforward, and southernly paced. His words come through clearly across the BART board room.

The Oakland Warriors are scheduled to play for the NBA World championship in the afternoon. Why a vote on the“minimal use of force” policy would be considered for late this afternoon is a subject of debate for some members of the community who organize against police brutality. 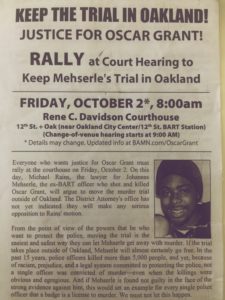 Oscar Grant was murdered in 2009 on BART’s Fruitvale platform by BART police.

“It’s good enough.” A board member reiterates steadily in different ways on microphone. Another cautious member of the BART board to his left wants to look into the proposed safety rules further. The insistent member is attempting  to push a vote through now. He’s bothered how a perceived “95 percent” safety rate reported in the report (just released today) is not good enough to make a vote for this afternoon.

“If Oscar’s death could be prevented by making sure that not even 5 percent is missing in safety and making sure that BART is 100 percent up to standard, we must do whatever we can to prevent another tragedy. Ninety-five percent is not good enough because if something does happen to another person, and it may of been prevented by suring up only 5 percent, it’s on us, and this BART board as a whole,” Uncle Bobby says.

Before turning around and walking back toward to his seat with a white file in his arms and darker shaded hands; a huge BART sign faces his back.
Uncle Bobby speaks with an authority members of BART’s board have not felt, the unexpected loss of a family member due to riding BART.

Oscar’s death is a scar that won’t quite heal, or seal, no matter how much people choose to see, or do not see, speak, or do not say about that day.
Oscar is always present.

New BART Police Chief Carlos Rojas, hired just a month ago, introduces himself formally to the board, and reads from a prepared statement. Another board meeting is scheduled one month later for further review of the new report, and a possible vote on “use of force.”

BART Police’s response:
“The proposed “minimal” use of force policy is unconstitutionally vague and the implementation of such policy exceeds the District’s authority, increases officers civil liability, and subjects officers to increased community complaints.”- BART Police’s response in a letter from their lawyers.

New BART board meetings and current information on all meetings can be found on BART’s website.

The A.P.T.P. hosts a non profit organizing session which organizes legally and peacefully to end police brutality. Their inception came soon after Oscar Grant’s death at Fruitvale station in 2009.

Uncle Bobby sits in a large break out circle, and as the evening winds down, conversations continue to rise; he’s recounting credible studies across America on new trainings for police officers, on how to deescalate, and avoid killing dogs on duty, how it’s somehow helped in decreasing the amount of dogs killed by police on duty.

“ If they can do this for dogs they can do this for human beings. These are just facts, you can go to the D.O.J. (Department Of Justice) and study it!” Uncle Bobby emphasizes this point in a circle while holding up a letter from BART’s Police about their controversy concerning the word “minimal” to describe use of force.

Ironically.
There is a long and deadly history in America concerning black people, police, and dogs. The irony of police saving more black lives coming out of an effort to save more dogs lives is quite poetic, simply because, Oscar loved dogs.

Since the times of slavery, dogs have been used as a method to control runaway slaves. Images of this abusive relationship can be found in movies such as Django or Roots. In Birmingham, Alabama, Sheriff Bull Connor, during protests lead by M.L.K., gave the order for dogs to attack and bite kids, images fully captured in black and white pictures for the world to see. And.”The man who shot and killed K-9 Officer Jethro, of the Canton Police Department in Ohio, has been sentenced to 45 years in prison,” according to ABC News in 2016.

The irony of “minimal force” for dogs being possible, but not for humans remains. However, peace is possible.

Oscar never responded but he knows he saw the text, because, his girlfriend made sure to ask who is texting Oscar so late on New Year’s Eve.
While they were together, for the last time ever – riding BART.

Family, friends, and supporters gathered at Fruitvale BART Station in Oakland on Jan. 1 to remember Oscar Grant and the movement sparked by his death 11 years ago.  Speakers, poets, and singers remembered Grant, chanted […]

MULTIMEDIA: I Am Oscar Grant