Fruitvale after the Ghost Ship fire

Note: this story originally aired on KALW Public Radio 91.7 FM in San Francisco as part of their “Sights & Sounds of East Oakland” series and was published on the KALW website. You can listen to the audio segment at KALW. Oakland Voices correspondent Kat Ferreira lives near the remains of the Ghost Ship warehouse—where 36 people died in a fire in December. She brings us this story about how a new mural is helping some neighbors process the tragedy and move on. 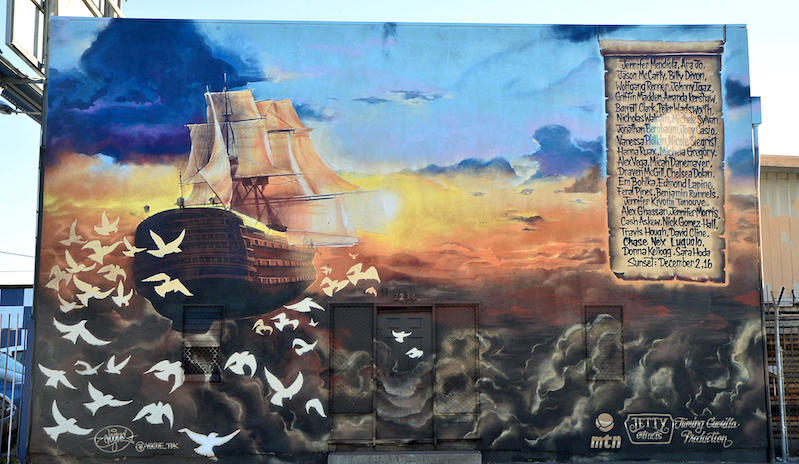 A memorial mural painted in memory of the 36 individuals who lost their lives in the Ghost Ship fire. Photo: BRYON MALIK

It’s spring and my neighborhood is humming with all the usual, day-to-day hustle. Cars and buses rumble down potholed International Boulevard towards Fruitvale Avenue. Old men sell paletas out of their sidewalk pushcarts, and brave crossing guards stop traffic to help children get to school.

If you didn’t know any better, you might think everyone forgot about what happened here four months ago.  But some nights, I look out my back door and I can still see the tall billows of angry smoke, as clearly as I did on December 2nd.

Today, the blackened shell of the Ghost Ship warehouse still stands, stretching above its chain link fence and makeshift memorials, like an open wound too big for its bandage. 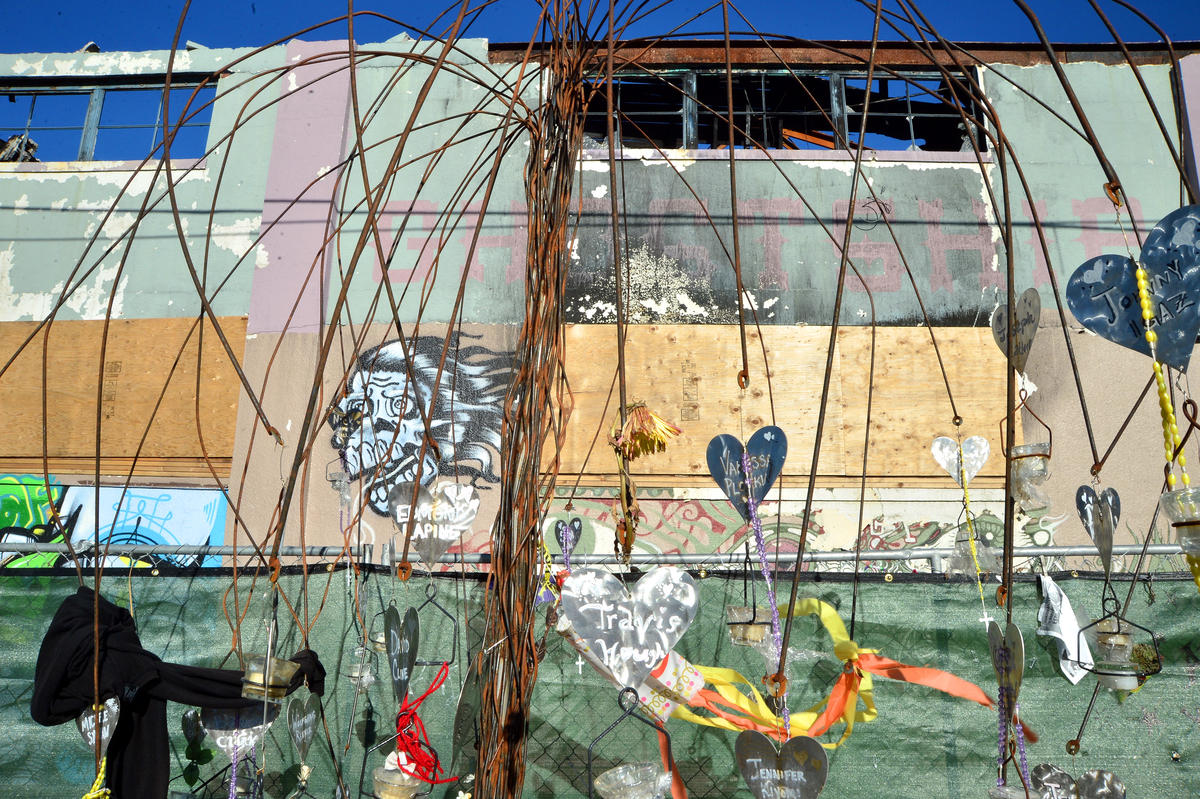 “I think a lot of people are here are just numb from the fact that it happened so close. It hasn’t gone away. It’s just like it happened yesterday,” says Al.

Reed Supply has been a fixture in the Fruitvale neighborhood since 1956. An Oakland native, Al has worked at the shop for 42 years. 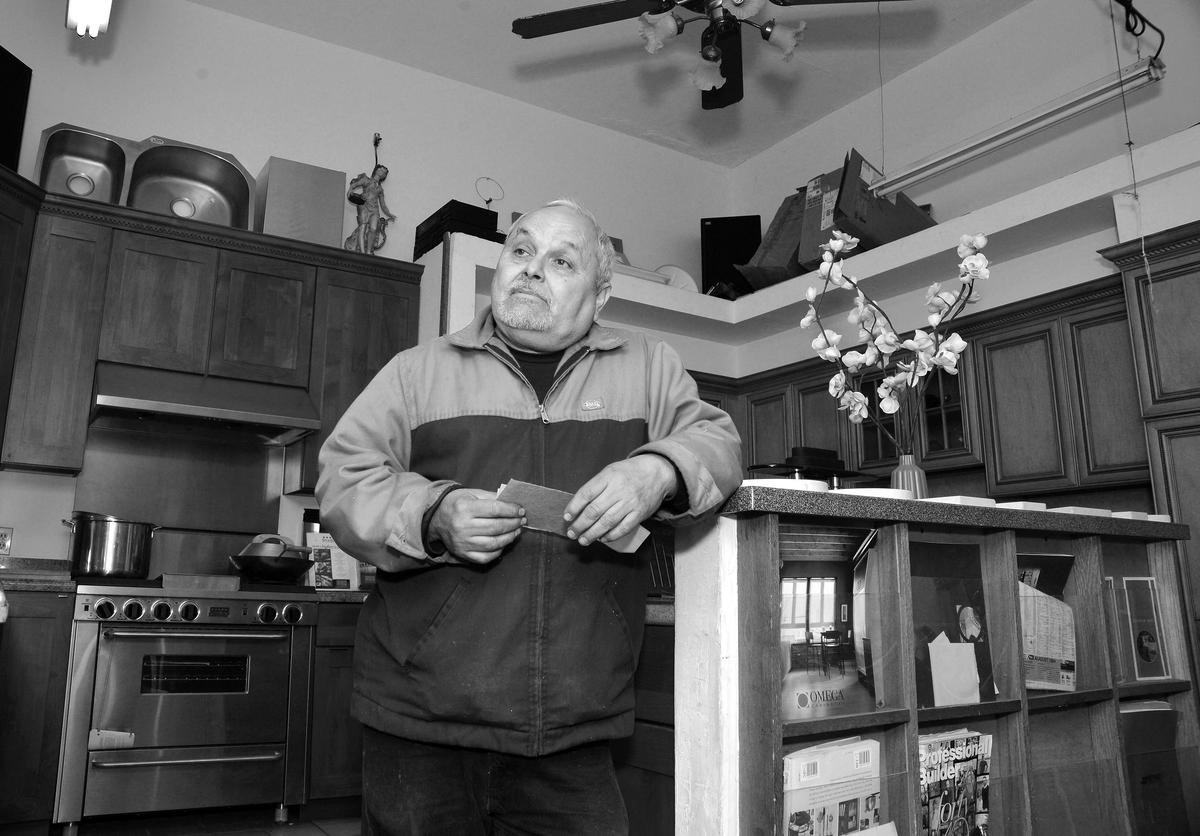 ”I am not opposed to the building, I grew up here. It was a dairy then, and we used to play in there as kids. To me the building brings back good memories to me of childhood. I’m just opposed to what’s on the outside of the building.”

Al’s referring to some paintings on the front of the warehouse that pre-date the fire. The building had been an underground gathering and living space for artists for years. Sometime in 2016, shortly before the fire, someone painted the words “Ghost Ship” on the front wall along with other artwork, including an ominous black-and-white skull rising from the window in a trail of smoke.

The image was often featured in news coverage of the fire, and it’s still there today.

“I can say that it’s time for…the city maybe to step in and do something with the exterior of the building, or tear down the building completely,” says Al. “It’s offensive the way they have it currently with the skeleton painting on the front, and the fence around it. I think we got enough fences. Even the people that come to memorialize if you will, I don’t think they really want to see that skeleton on the side of the building.“

When you stand at the shop counter and look towards the street, the doorway creates a haunting frame around the bug-eyed, black-and-white skull.

“I think it’s disgusting,” laments Al. “I just don’t think that it’s appropriate to have that on there after the tragedy.  And as for the folks that died, they should be remembered, and I think the artist community has tried to put their foot forward to try and get something going.”

Al’s right. Since the fire, Oakland’s artist community has responded to the tragedy.

In February, a veteran aerosol artist painted a mural about 10 blocks away from the warehouse, in honor of the victims who died in the fire.

Norman Chuck, who goes by the moniker Vogue, didn’t know any of the people who died personally. But as soon as he heard the news back in December, Vogue says he knew that he had to paint something in their honor. 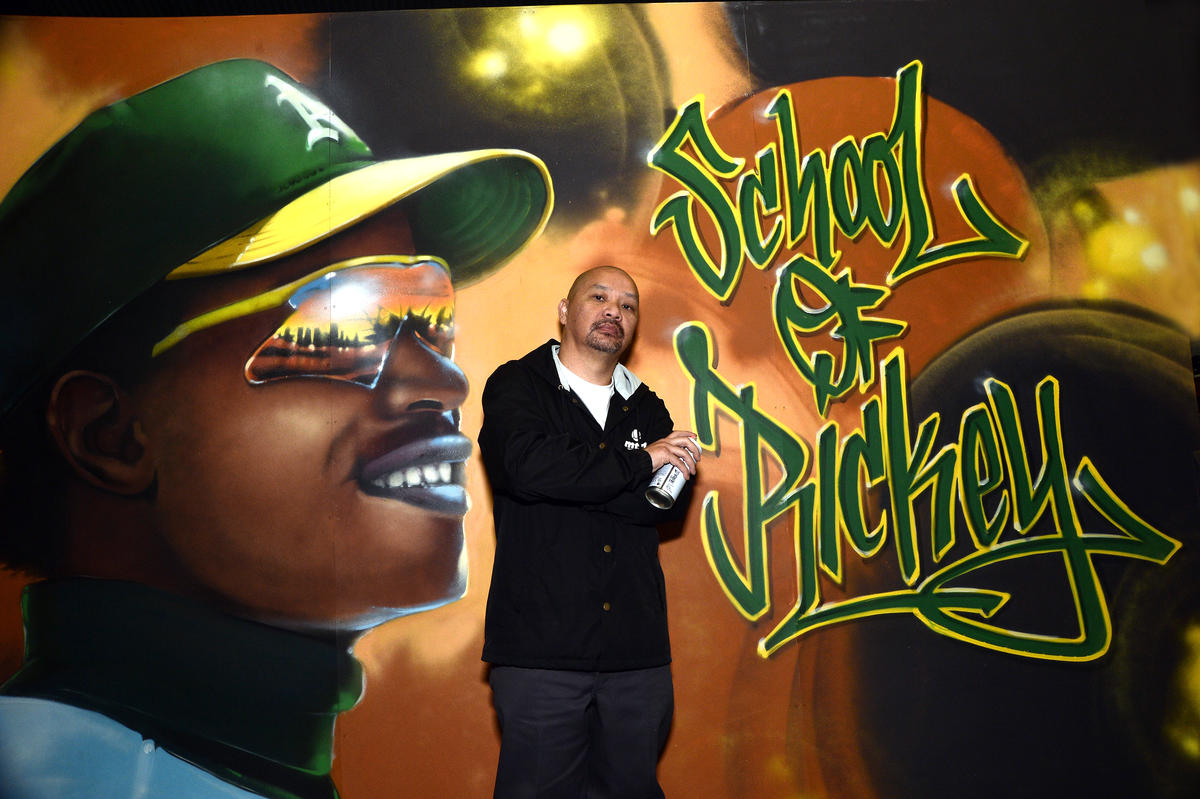 “When it happened, I was sick, so I spent a lot of time sitting on the couch going ‘Man, I wish I could do something.’” Vogue says.

Weeks after the fire, through the serendipity of Oakland’s tightknit artist community, an opportunity presented itself.

“I was painting another gig, elsewhere in West Oakland, and one of the survivors actually was on the film crew that was taping me.  My other partners that were with me realized ‘Hey, he was on TV’ so then one of them just bluntly asked him, ‘Hey, weren’t you on TV for something?’ And he’s like, ‘Yeah, I’m a Ghost Ship survivor.’ So we got to talk a little about him. And I told Sage, ‘You got to get down here.’”

Vogue called Sage Loring, a street art lover and curator known as Fuming Guerilla. Sage is the co-founder of Dragon School, a nonprofit that provides youth with street art-making opportunities in Oakland’s Chinatown. He also specializes in connecting muralists with business owners whose properties serve as canvases.

For this project with Vogue, Sage says he took special care in consulting survivors and finding a site for the Ghost Ship memorial mural.

“The idea at first to do a dedication mural sounds wonderful,” says Sage. “But because of the severity of what happened, the fire, and all the people that lost their lives, you don’t want to approach that without being a little sensitive to the issue.”

“So we got the feedback, first and foremost, of people that were directly affected. Then, the next thing was ‘what’s a good location?’ I didn’t want it to be too close. I don’t think that was the right approach. You don’t want to have it on that site necessarily. But in the general area that represents where it happened,” Sage explains.

The mural’s location on EAST 12th Street is about 10 blocks from the Ghost Ship warehouse. It’s also not far from the 23rd Avenue rail yards where Vogue and other founding members of the TDK crew—or “Those Damn Kids” as they were once known—crafted their art back in the 80s and 90s.

Painting a mural that honors the next generation of Bay Area artists whose lives were cut short by the fire, is a way for Vogue to give something back.

“Even though I live in San Leandro, Oakland made and created me. They helped me. I was able to come here as a young teen, paint in the Oakland Fruitvale tracks when there was nothing. Like everything was pushed to there, into that one particular area. And so for many years, that’s where I kind of grew myself,” Vogue says.

“I’m in the point and position now. Before I was like just one of these other kids, running around the streets. And now, like I feel I have a bigger voice now.”

But it was Vogue’s wife Gloria Contreras who most influenced the final design: A wooden ship in full sail, floating above clouds of smoke into a heavenly sunset, followed by thirty six doves. 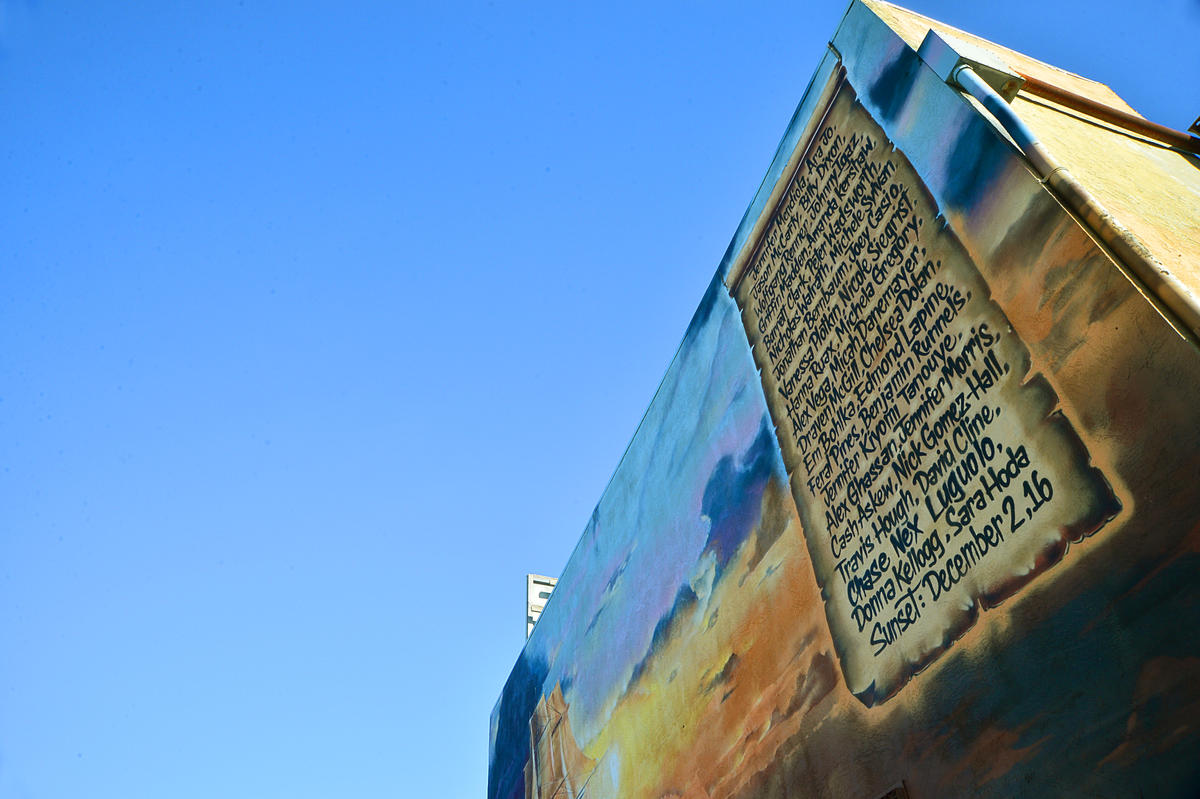 The names of the 36 individuals who died in the fire. Photo: BRYON MALIK

“I wanted it to be more about healing,” says Gloria. “Like, you could look at it and you could actually feel…maybe make everyday a little better. You know, they’re in a better place. Not something spiritual, not necessarily something religious or gloomy. But something that could help heal.”

Gloria grew up in Fruitvale and still has family in the neighborhood.

She didn’t like how some of the early mural designs referenced the objects and art installations associated with the Ghost Ship warehouse.  Gloria thought the mural should be about the people, not the building where they died.

“The fact there’s a dove representing each person, so that’s a thing that was really important, to have each person count. To not just have a name. But to actually look at a dove and think, ‘OK, they’re together, they’re in the same journey,” Gloria says.

Vogue says as he was painting, people would stop to watch. “ I remember seeing one lady in particular and she was just like, ‘That’s so beautiful’ and thanking me for doing it, but she was crying.”

As time passes, the Fruitvale neighborhood is moving on, thanks in part to Vogue’s memorial. But political fallout from the fire still hangs in the air all over Oakland.  Gentrification was already impacting my community before the fire. My neighbors and I wonder, will luxury condos be built where the ghost ship warehouse once stood? Will it become housing for artists again? What changes will the future bring?

This story was produced for Sights & Sounds of East Oakland, a collaboration between KALW and Oakland Voices, a community journalism program of the East Bay Times and the Maynard Institute for Journalism Education.

Filed under: 2016 Project Blogs, Life in East Oakland, My Neighborhood