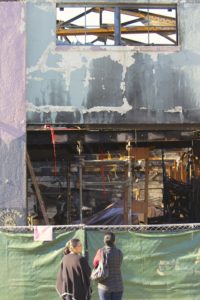 The parking lot of Wendy’s across the street from the “Ghost Ship” is where people sit in their cars and stare at the massiveness of the incident. They can see the whole building from there, clearly, imagining it burning The people in their cars look like family and friends of the victims, maybe concerned citizens; others look like vegans. No one is here for fast food. 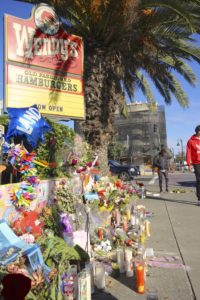 Fences in front of the Ghost Ship’s sidewalk divide the public from the urge of shuffling through the remains of the crime scene. Charred architecture held behind green gates hold beautiful things like classic cars and Buddhist looking sculptures sitting in ash. The car stereo shop next to the Ghost Ship Warehouse is badly burned and temporarily out of business. More importantly: 36 human beings were killed during this tragedy.

The Ghost Ship Warehouse, located on 31st avenue and International Blvd, is now a modern day ruin. People are constantly gathering outside of the green gates pointing, praying, peeking, and gazing at the ruins of the warehouse building in pure disbelief. All stand respectfully behind a “Do Not Enter” sign.
Other parts of the community are still mourning live and online in real time. 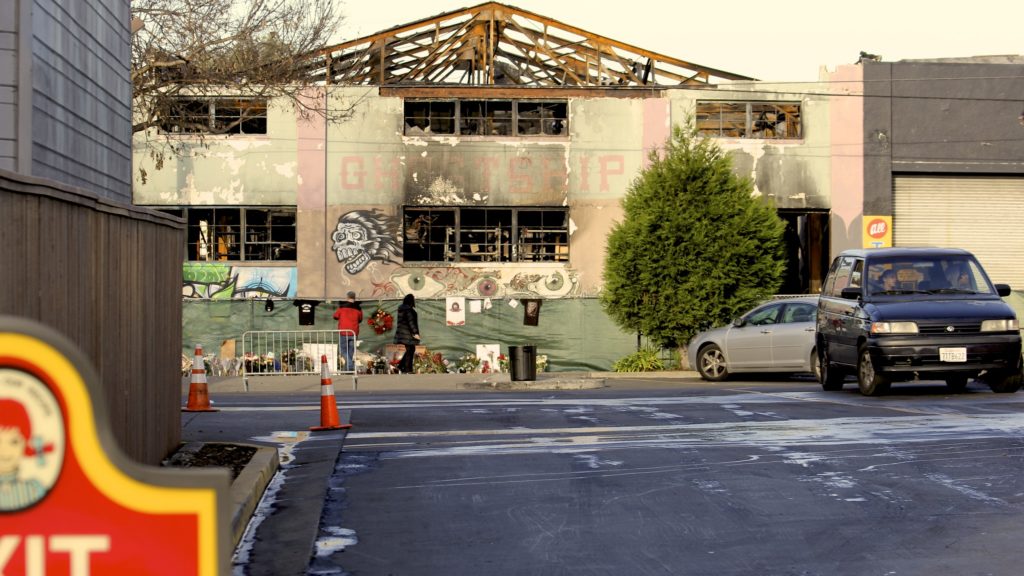 Social media timelines are lit up with hardcore allegations and rhetoric against the operator of the Ghost Ship with personal testimonies of Derrick Ion’s, character. To be fair, some are defending him as a rouge artist with a dream, but others say that wherever he went he brought “a bad vibe.”

Lesser known are the whereabouts of Chor Ng, the owner of the Ghost Ship building. Apparently, only God and the FBI could ever have a hope of finding her these days.

Seriously. Where the F%#! is Chor Ng?

What was her duty as an owner to keep the building up to code? And what is the city of Oakland’s duty to make sure of it? Anyone and everyone potentially liable for the Ghost Ship fire are deftly passing blame in a murderous game of hot potato. Except for Chor Ng who would rather use methods of the Sun Tzu and vanish like a ghost, while her enemies run amok and fight each other in confusion and chaos.

The master tenant of The Ghost Ship’s name, Derrick Ion, is being used to tag the walls of Oakland buildings with 36 hand sprayed candles to represent each death by fire. Facing possible liability for operating an uncoded premise, Ion has lawyered up and released a press release saying that it was the government’s fault for not “properly policing” his personal warehouse project. The owner,  Ng, remains gone like the wind and has only spoken brazenly through silence. 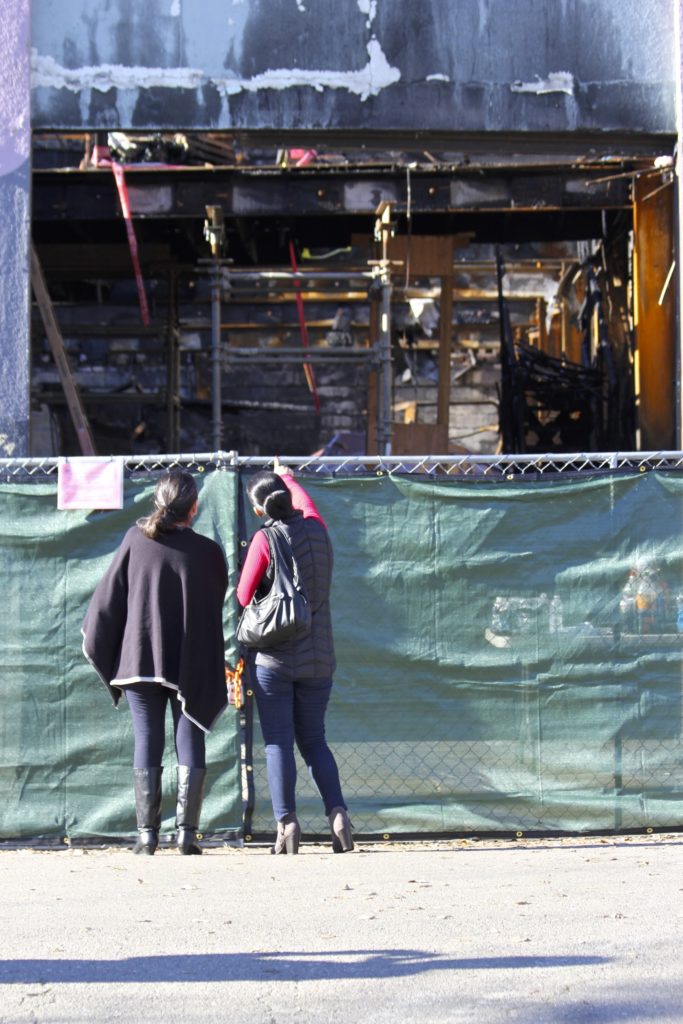 The “Day Of The Dead” festival on International Blvd of the Fruitvale District in Oakland is celebrated annually here. Festival goers walk by the exact same location of the the Ghost Ship Warehouse – faces painted in white, with hints of black and red as pretty skeletons. The self prophesying fate of titling a business “The Ghost Ship Warehouse” tastes like irony in the air. Morbid, heavy, and thick. Nomenclature proved crucial to the philosophy of this particular business.  How it ran and operated illegally and how it recklessly tempted with hidden flames of death. 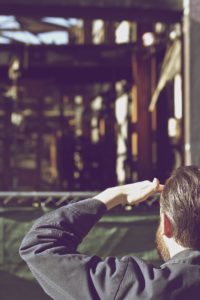 Reminders of death inside “The Fruitvale,” are now a thing of global attention. In fact, the legend of Oscar Grant’s murder began only blocks away from the Ghost Ship at the Fruitvale BART station.
A homeless man is caught eating chocolates off of the altar located on East 12th and 31st ave. There are no consequences or shame on his part.

The neighborhood has now become a place of pilgrimage comparative to a reluctant holy site or a revered church. Gifts left behind for the victims are secretly taken as needed to survive by people of the street.

Security guards sit hidden in cars waiting for people to try and hop the green gate or even just touch it. As I get too close to the green gate with my camera, one man calls me over with an inaudible grunt. I walk over, but he forgets that his teeth are out. He quickly places them back in his mouth to speak with me and I sheepishly pretend like I don’t notice.

He says, I stand out to him because of my camera, and he wants to know what is my business here. But he really just wants to talk.

“Where are you from?” he asks. Oakland. Feeling that he can be honest with me as a native, “feeling himself,” and seemingly slightly unburdened by the smells of liquor from his car, he unloads in an uncensored moment of theory. “You know what this is – right?” Pointing to the ruins behind me from his driver side window. No, what? “Gentrification.”

I don’t go there with him and I can only focus my comments on the loss of life, the unspeakable tragedy of so many souls passing. But the question of being pressured to live in an unsafe space just to be able to afford living in the Bay Area today is worthy of serious inquiry. 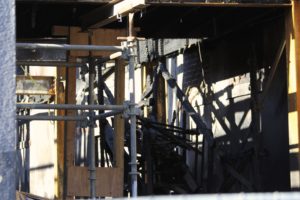 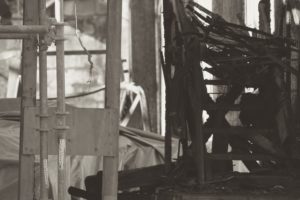 An older stout lady with short white greyish hair under a tightly fitted baseball cap and oversized flannel jacket comes up to me and touches me twice on the arm in a consoling manner. I start to imagine where the staircase is with her, only finding a melted black mass. “Why couldn’t they just jump out the windows?” she says to me on a this Sunday morning, looking like she forced herself out of bed, still dazed by the news. She knows none of the victims, but it feels like she does. 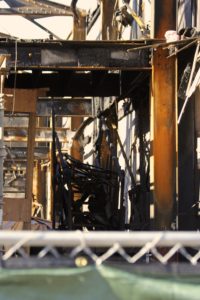 “I was looking up, ready to catch anyone, and no one else came,” Aaron Marin said. “No one else ever got through the window.”

A  survivor and resident of the Ghost Ship, Marin was one of the only people aware of an open window during the fire. He leaped through the upstairs kitchen window. The last to survive.

Yet, the question of permits still persists, and still brings no one back, and is still yet to lower rents in the Bay Area. In essence, the problem remains. The government will crack down on unpermitted living and rich developers will use this as a talking point for why they should be allowed to turn all of Oakland into one big luxury condo complete with high tech sprinkler systems.
Petitions to stop the evictions in Oakland and beyond have come in abundance by nature.

The whole situation is literally, “one big hot mess,” I say in our Oakland Voices community correspondents’ meeting inside of the offices of the  East Bay Times in downtown Oakland. I can only now reluctantly write about this fire with caution and trepidation, and based on a limited understanding of what has been published thus far.

This was before I visited the site where gospel music wails from one dark, older mini-van facing the Ghost Ship, parked securely inside of the Wendy’s parking lot, speakers lifting sound faithfully louder than normal. The street in front of the windshield is blocked off from all possible traffic. 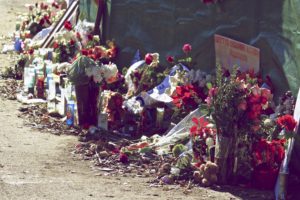 The feeling of community gathering and growing from here is how it should remain some people believe – forever- in tribute.