A Place Where Community Happens 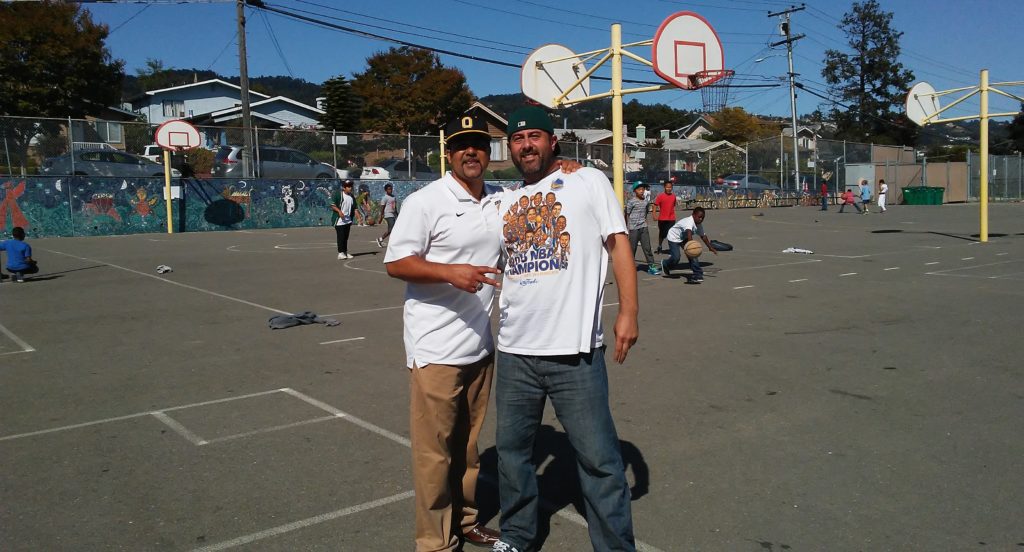 Friends since they were classmates at Sequoia Elementary School, Lou Richie and Zachary Hile scout the next generation of Oakland ballers on their old stomping grounds, the legendary Sequoia dunk courts.

“We’re all different, but we all have that love for Sequoia.”

At the risk of missing the start of Game 1 of the NBA Finals, several generations of Sequoia students, families, and staff showed up to honor veteran teacher Carol Pancho at her retirement party after a 40- year career; she spent the last 17 years at this public elementary school in the lower Oakland hills. There were many educators, a former two-term teachers’ union president, and even a former Oakland Unified School District (OUSD) Board member and superintendent.

What makes Sequoia a special place?  “I like the diversity of different cultures here,” Pancho responded. Statistically, Sequoia is the most diverse school in OUSD, but that isn’t the only thing that makes it truly special. She added that supportive parents and dedicated teachers are also contributing factors.

Also in attendance was Sequoia alumnus Lou Richie, a fellow teacher and the boys varsity basketball coach at Bishop O’Dowd High School. Richie is dating Pancho’s daughter Ashley, and just in case you didn’t know what a tight knit community Sequoia has, Richie’s mother Pat, who taught in Berkeley, was in attendance as well.

Richie’s family moved to Oakland from Berkeley in 1978, before he entered second grade. The only son of two teachers, he tested into a split-grade Gifted and Talented Education (GATE) class. The teacher of that class, Evelyn Gertler, had desegregated a school in New Orleans earlier in her career, and Richie remembers her promoting gender awareness and fostering a “competitive yet loving” atmosphere in their racially diverse classroom.

“We pushed each other,” recalled Richie.  “I wanted to be the most gifted.”

Zachary Hile, a videographer, was another member of Gertler’s GATE class at Pancho’s retirement party. Like Richie, Hile was an only child and a fellow latchkey kid. His father was a gardener and his mother was a secretary, and he had transferred to Sequoia a year earlier from Fruitvale Elementary.

Though they were a year apart and lived on polar opposite sides of the neighborhood (Richie lived up the hill on Lincoln while Hile lived down the hill on Laguna) the two became “like brothers” through their shared experiences on the Sequoia campus both during and outside of school hours.

“That was the place we all congregated,” he said.

Richie recalls that they organized sports leagues and even kept statistics. In the absence of adult supervision beyond the watchful eyes of the neighbors across the street, the Sequoia playground was where the neighborhood kids learned how to socialize and “self-govern” themselves.

“We learned how to fight and forgive,” said Richie, adding that his mom often had to come down to campus and force him to come home at night.

Even during the height of the drug wars, Sequoia was a safe place. “We all lived in the neighborhood and knew each other. We looked out for each other,” Hile said.

After graduating, Sequoia was still their hangout, so they got to know the younger kids in the neighborhood. The campus was such a popular hangout that kids from all over town would come to engage in legendary pickup games on the “dunk courts.”

Academically, Hile remembers going on field trips and learning outside of the classroom. He said the teachers were all fun and attentive. “The teachers always really cared. They set you up to succeed.”

Richie remembers an intellectually- engaging environment that fueled his thirst for knowledge. He proudly boasts that 90 percent of his classmates from Gertler’s diverse but majority African- American class earned a college degree. “We had some incredible people we grew up with,“ Richie said.

Even during the height of the drug wars, Sequoia was a safe place.

Three years after both Hile and Richie had graduated from Sequoia and become the elders on the playground, Betty Olson-Jones enrolled her son in first grade at Sequoia.

She lived down the hill near Jefferson Elementary, but a friend had told her that Sequoia Principal Eileen Linssen was semi-secretly recruiting parents who would be active in the school community. This was two decades before open enrollment. Olson-Jones not only took charge of the spelling bee and became President of the PTA, she eventually became a teacher at Sequoia and then President of the Oakland Education Association (OEA).

Olson-Jones’ fondest memory of being a parent at Sequoia was the teachers’ acceptance of kids who were different. She remembers Sequoia being racially balanced, but says there were “very few white kids” like her son.

She also liked Sequoia because it was small and had veteran faculty, and she believes that it was overlooked by the district since it was neither an affluent school higher up in the hills nor an underserved school down in the flatlands.

Being a “mid-range” school kept it under the district’s radar, and a long line of strong principals (including new OUSD Superintendent Kyla Johnson-Trammell) who have been open to feedback and willing to push back against district leadership have had the autonomy to let the teachers lead with what Olson-Jones called “free reign with some accountability.”

Her positive experience as a parent at Sequoia made her want to give back, so she became a teacher in 1994, teaching a bilingual class at Allendale Elementary. She was soon recruited to Sequoia, where, despite her reluctance to leave an underserved school for one that had plenty of good teachers, she taught fourth grade and later fifth grade from 1998-2006. She served as President of OEA for six years, then came back to teach at Sequoia from 2012-2014.

Her fondest memories as a teacher were the daily classroom meetings, where students sat in a circle, someone would say “Good morning” in a different language, and then they would all check in with each other. She recalls “letting them take the lead and seeing the brilliance that comes out of them when they’re left alone.”

Olson-Jones said that there were still only a small number of white students at Sequoia during her first stint, but during her second stint, almost a decade into open enrollment, she noticed “much more.” She added that the PTA was historically multi-racial and representative of the school community, but that “it’s more of a white thing now.” 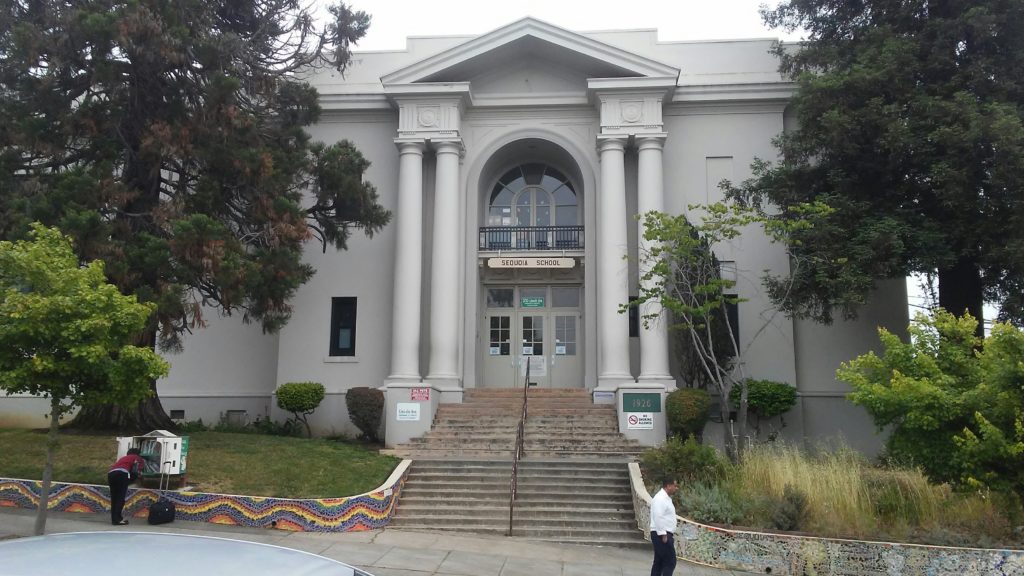 From the outside, Sequoia looks like a stable institution where you would want to send your children.

“There was never an issue with race when we were growing up,” said Richie.

Hile agreed, and added that the multi-cultural potluck was a very popular event back in their day. He also recalls a time when a Chinese classmate came back from a trip to China, and their teacher spent an entire day discussing the trip in class.

This embracing of difference helped teach Hile “how to relate with anybody I meet. I didn’t know what race was until I was taught it.”

He said that he learned about both race and class when he went up the hill to Montera, with a predominately affluent white student body,  for middle school  and it was culture shock for him.

Richie went to Bret Harte for middle school and started hanging with a rougher crowd, but the two have remained close friends over the years. In fact, Hile is one of Richie’s assistant coaches at O’Dowd.

Most of the children that Richie and Hile grew up with are still friends, and many of them are Oakland success stories. In an era when most people don’t even know their own phone numbers, Richie said, “I still remember people’s phone numbers from the second grade.”

As she leaves a long teaching career behind her, Pancho noted that in addition to the amazing students, engaged parents, and committed teachers, the long and proud legacy of Sequoia principals has contributed heavily to making this public school the special place that it has been for a long time. “It’s important to have a really strong leader who has a vision, goals, and direction,” she said.

Current Principal Donald Bertolo said he is honored to have the opportunity to continue that tradition. A transplant to Oakland who didn’t know much about Sequoia before he was placed there, he said that the minute he interviewed he felt like it was home and he knew that he could be himself there.