Strength can come in many different forms. What does it mean to be resilient? How did you learn about it and where did you get it from? 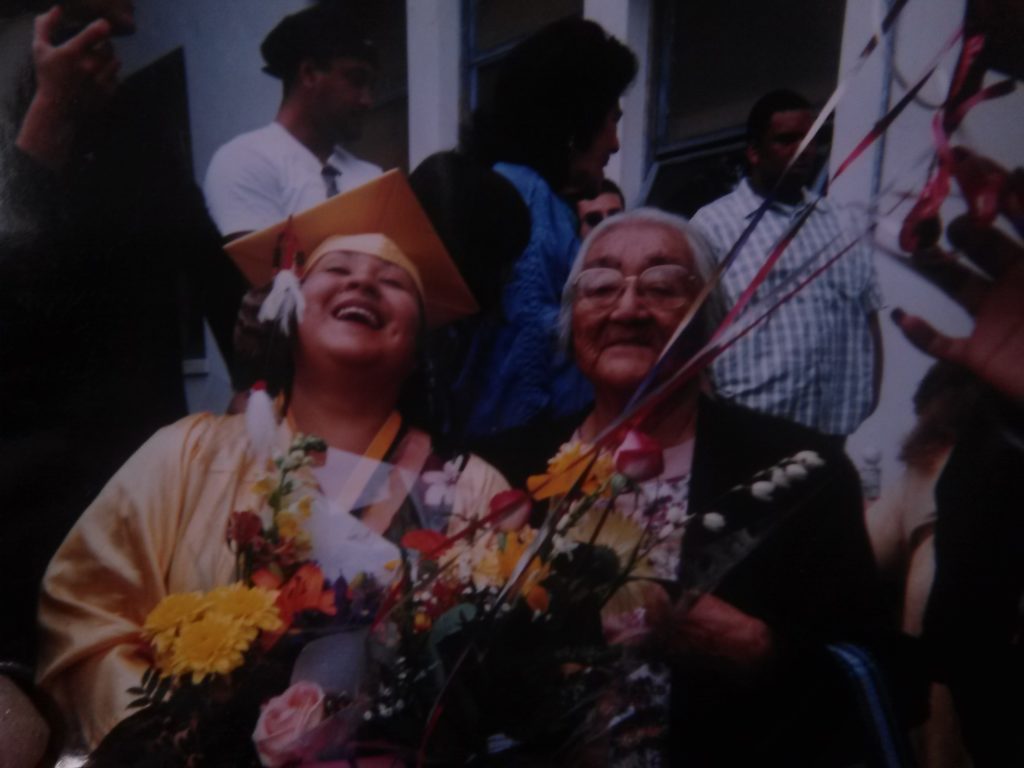 Me and my great-grandmother at my high school graduation

I believe that each generation has to overcome obstacles that are characteristic of that era in time. What may seem to be resilient in the 1920s may not be the same for someone in the 1960s or 1990s. Yet, courage and how we handle things can definitely be inherited by each generation as we move along. And for this instance, I would like to start off where it began for me, and it began with my great grandmother, Eleanor McNoise.
One day, when I was about 18- years- old, I rushed over to my great grandma’s house to talk with her about things I had learned in my American Indian Studies class at San Francisco State University. I had refused to take history classes in high school because it was an incorrect depiction of what really happened to our people, Native Americans.

I was so interested, yet concerned about how I would bring up the topic, considering she has never talked about it before.  So, I just came into my great grandmother’s house and asked like I always ask about things. “Hey grams, I’m learning about some things in my AIS class and wanted to ask you about your past as a person growing up in that time.” 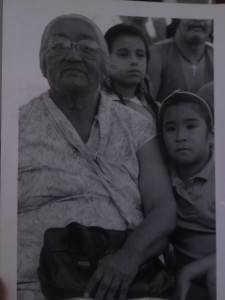 Me at 8-years-old with my great-grandmother

She looked up at me with her big brown eyes like a child needing assurance, and said, “sure…okay. What do you want to know about?”
Holding my writing pad in my left arm and my pen in the right hand, I went in and sat down on her comfy bed and listened to her describe her life when she was a young girl in the 1920s. She had such a dignified and humble gaze upon her face as she started the story.

She was born on April 11, 1914 in Oregon. She and her sister Ruby were the only survivors in their family after the small pox epidemic. As the laws governing Native lives shifted around, so did our Native people, traveling from one government program to another government program.

In a time when your long hair, brown skin, and the language you spoke were enough grounds to kill, beat, rape, and torture you for public amusement, these sisters stuck together through it all and kept smiling.
As she took a deep breathe, she seemed to go back in time to when she was that little girl. She told me how she worked in the fields for five cents a day. She explained how being sent to an Indian Boarding School was so scary but they had to do what they were told. If the children or parents did not comply, they were forcibly removed and beaten.

As she spoke about these difficult times being under the government’s care, only a few tears trickled down her cheek, ever so slowly.  As if the tears themselves had such dignity and grace too.

Yet, despite their hardships, she explained how she met her husband and created a life for herself and her eight children. Her story was fast and brief, and it was over. It was almost as if she did not want to open the wounds or maybe it was a literal way of moving forward.
My great grandmother’s experience of her childhood and adulthood was typical of Native women of that time: You don’t talk about the bad and definitely don’t talk about how things didn’t go right. All a woman could do was deal with it because she had no other choice.

She shared that no matter how much “they” tried to beat the Indian out of her, she never forgot who she was or where she came from. She recounted the difficult experience of a mother witnessing her husband, children, and grandchildren dying off from drug and alcohol abuse, yet she always stayed true to herself.

“You don’t have to do what everyone else is doing too,”  she said. Just be yourself.