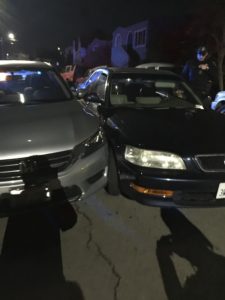 The dude drew a weapon (hand gun) and made the ugliest grimace that one could imagine.  And then he hollered, “Gimme yo sh*t!!”

It was 18 minutes past midnight, on the 26th of December 2015, and I had just pulled up directly in front of my house in Oakland California and noticed that a car was parked in my usual parking space. I thought that perhaps my family members were entertaining friends or other relatives.  I double parked and called my family from my cell phone to inquire about the unusual car.

While I waited for someone to answer, I felt a sudden hit and jolt to my car.  I looked up from the ringing mobile phone and saw that a person in a car had clipped the front driver’s side of my car with the left side of their car.  Now their car was merged at an angel into my front bumper, right in the middle of a small hillside road , at night.
I live on the cusp of Maxwell Park and the Laurel District.  I know it’s not the ritzy part of Oakland but at the same time it’s not the rough part of Oakland either.  Given that people were still celebrating the Christmas holiday, I rolled my window down a smidgen and asked the dude: “What’s going on man?”  My tentative guess had been that perhaps he had imbibed  more than his share of spirits and that the “hostile merger” had probably been accidental.

It had not yet registered in my mind that this was a prelude to an attempted armed robbery.  I looked at the person and though the window was completely rolled up on their car passenger side, I was able to hear the faint sound of the demand growled out from the ghastly contorted facial expression.  His demand was punctuated with the suddenly raised hand gun.  It then dawned on me that I was involved in a situation.

He issued commands to his accomplices that had apparently pulled up behind my car in a stolen van, while continuing to point the weapon.  I took my car gear out of park and shifted it into drive.  I accelerated and since the two cars were joined at the front bumper, the other car also accelerated and both cars went crashing into the parked line of cars in front of my house. 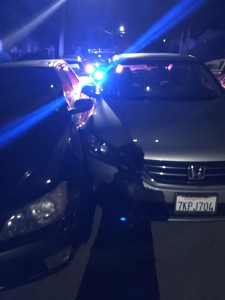 My car, on the right, rammed into parked cars during the attempted armed robbery.

Desperately, I tried to shift into reverse but my car was already lodged irretraceable between the parked cars to my right and the aggressors car to my left.  I then tried to open the doors; but again, I was in too tight and the doors could not open on either side.  I tried to roll the windows down but they would not work.  I frantically took my seatbelt off and threw myself into the back seats of the car and was able to force the rear passenger door open just enough to yell desperately toward my house for help.  It was not a wide enough opening to exit.

Instantaneously, my son bolted out of the house, armed and ran toward the collision.  My daughter trailed behind yelling at the top of her lungs for help.  The would- be assailant had by that time fled from his car and jumped into the stolen van, which backed up and made a U-Turn.

My wife, in the mean time, had been on the phone with the police dispatch operator; and since the police were already in the area responding to the stolen van incident, they too appeared rather instantaneously.

Ironically, the vehicle that they fled in was the stolen van and the initial car that was used to crash into mine was the car that they actually owned.  The dude left it running and with the lights on.  Soon the finger print squad was on site and then the tow truck to bring the car into the impound as evidence.  I am glad that would be robbers were probably amateurs; and, that they did not pull the trigger.