Like many, my family migrated from Louisiana to Oakland in 1954. My mother, Linda Wilson, was 10-months-old and the baby of the family, as my Grandfather use to call her. She was a vibrant child with a playful spirit. 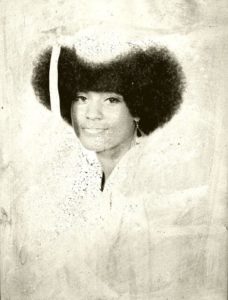 As a freshman at Castlemont High School, she was enamored of an upperclassman.  They dated for a while, but when she became pregnant, he made it clear that he did not want to be with her.

My mother did not know that she was pregnant; when she figured it out at 5 1/2 months, she went to her mother and told her.  My grandmother’s response, “I know.”
Southern families have southern ways.  My grandparents did not want my mother to keep me.  They tried to persuade her to give me up for adoption.  They offered to send her away to a boarding school where she could have the baby and leave it; no one would ever have to know.

She refused; his father and grandparents had already rejected her unborn baby.  My mother transferred to Dewey High School where she graduated in 1972.  Because my mother refused to give me away, my grandmother made her road hard.   A 16-year-old new mother was required to pay for the water, electricity, and even the toothpaste that she used.  She took all this in stride, at least that was the way it looked on the outside.

Bank of America hired her upon graduation from Dewey. With no college degree, she was able to go from a teller, to branch manager and has been recruited by national financial companies through the United States to underwrite and audit multi–million dollar mortgage loans. This did not come without a price. When she was 19, my mother was diagnosed with stomach ulcers that resulted from years of stress, fear, and anxiety. My brother, born five years after me, was born with one hand. Doctors said it was a genetic birth defect and that stress may have contributed to the condition.

My mother is a warrior who knew how to raise her sons. She taught me how a woman expects a man to show up. She held us to that standard and any men who were in our lives.

She found love late in life and married in 1980.  This was her husband and my stepfather, but most importantly, he was my daily example of manhood.  My mother married him because she trusted that he loved her sons as much, if not more, than, he loved her.

Though only five feet tall, my mother is a pillar of power and capacity.  She raised us to be independent, self-determined, and entrepreneurial.  She is my best friend, my sounding board and my life partner.  People often say, “You don’t know what it took for you to be here.”  Yes, I do Mama; yes I do.