Looking forward to a new day every night 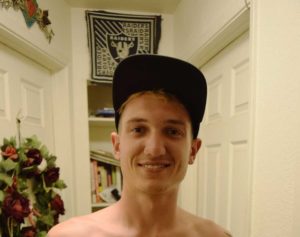 Quinn Reedy is a young man in his early 20’s. He was one of the few lucky ones who survived the horrors of lymphoma cancer and is still here on earth to tell us about it. Just like a lot of other types of cancers, lymphoma cancer’s risk factors are unknown. Lymphoma cancer targets the lymphatic system, including lymph nodes, spleen, thymus gland, and bone marrow, sometimes causing lumps on the neck, fatigue and weight loss.
Quinn has been my friend since I met him at Knotts Berry Farm back in 2012 when he told me about his condition. His life made a rough turn at the age of 18 right after graduating from high school.

Quinn wasn’t feeling very good and decided to go to the doctor for a checkup and was then diagnosed with lymphoma cancer. At the time he didn’t know if he was going to survive or not; the doctors had given him a 20 percent chance of surviving.
Quinn just wanted to have a good time with his girlfriend and his friends. He was never pessimistic about the fact that he had cancer or the fact that he was losing his hair. He was always smiling and having a good time when he was with us. He shaved his head right before he started losing his hair or showing any symptoms; he wanted to look normal around us, he didn’t want any of us to be worried about him. Even though he had lost weight and didn’t feel very good, he still held two part-time jobs and tried to move on with his normal life.

He went to the Alta Bates Medical Center in Berkeley, two times a week, for over 8 months. He underwent chemotherapy, radiation and a “port” (a metal tube) was connected to his chest that lead into his heart. He was also prescribed marijuana and put on a really healthy diet to boost up his immune system.

It was hard to see him around at the venues and house parties where we would usually see each other in Oakland. It was like that for over four months. I finally saw him at a backyard party in West Oakland where he told me that he was miraculously cured!

He looked like he was ready to start a new life. His hair was growing back, his body had gained a few pounds and his face looked like he had a lot of goals to achieve. He looked really excited about his health returning.

Soon after I saw him, he moved down to East Los Angeles to start some type of record store with some of his friends down there, but he came back after eight months or so.

Quinn thanks his friends, family and girlfriend for all the support that he received. He plans on focusing on family and friends because they matter to him the most. He looks at life differently now. Quinn Reedy looks forward to a new day every night.

“I am nervous and scared, but I am happy,” he said. “I live everyday like it is going to be the last, but I plan for the future”

Having a life ahead of him at the age of 21, he works construction in Oakland to help pay for his bills. He is also attending Laney College.  He is planning on majoring in business to start his own company. Quinn is doing great and is ready to take his life back. He is building a future for himself.