Out on the streets with Street Level

Don Francisco, a Street Level outreach worker who delivers breakfast to day laborers, is a little worried. Forty containers aren’t sufficient for the number of workers that he will see in the next couple of hours. “At least we have enough cold drinks and apples,” he says as he begins the drive along E. 12th St on this already hot, sunny morning. Fortunately, not as many men as usual seem to be waiting along the streets. That’s good news – it means that there is still a late summer demand for construction workers, landscapers, movers, and painters.

We stop at two small clusters of workers; Don Francisco speaks to them in Mam, a Mayan dialect. He reminds them that there’s a doctor in the clinic today. A hot meal will be available and they may have a chance to meet the new executive director who will be introduced at closing time. He passes out small fliers which list the schedule of services at Street Level — the hot lunches, the weekly wage theft workshop, medical and mental health service hours, consultation hours for the nutritionist, and the opportunity to enroll in health insurance programs. He gives out hygiene kits, condoms, to those who are interested before we set out for a next stop. 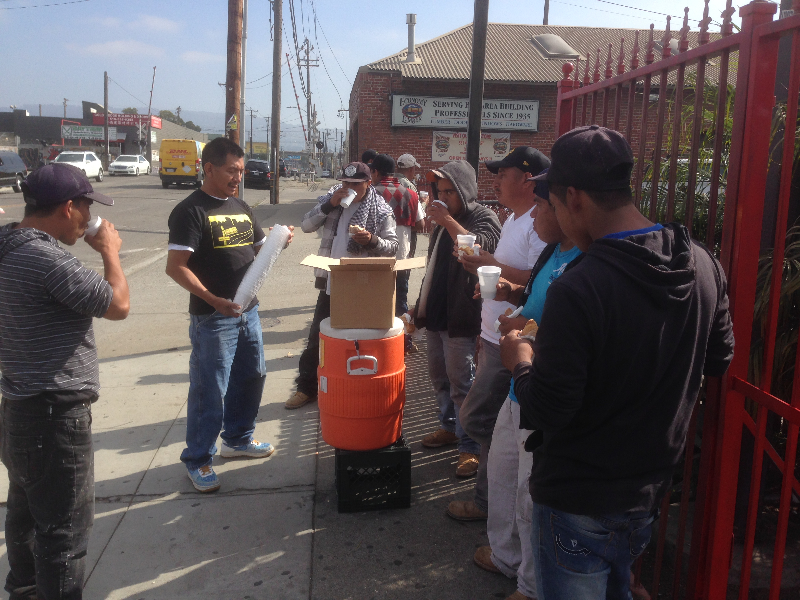 A larger group of 15 men awaits outside on the small knoll on the other side of the fence of Home Depot. Immigrant workers are used to fences; they welcome the shady lawn. Some days find up to 50 men in this spot ready to work in their outfits of faded jeans, work boots, long sleeve shirts, and ball caps. This morning’s breakfast seems to give them a lift as they hold onto the hope of a day’s pay.

Further up the road near High St. and International where canciones blare out from a nearby Mexican restaurant, we meet the largest groups and come up a bit short with breakfasts. Even with that let down, the day laborers are thankful for the cold drink and speak with animation in a language I don’t understand.

“There was more work in July; it’s not so good this month,” says a lean middle-aged man.

“You never know, sometimes people come by as late as 3 o’clock,” says a younger, stocky man. “I thank God always that I’m here. I feel blessed when I get two to three days of work. I’m so thankful. I love doing landscaping but I’m happy to do any kind of work — moving furniture, painting ….”

As we pack up, the men find shade under the large bushes by the gas station or along the wall of a nearby warehouse. Don Francisco, who supplements his morning job with afternoon odd jobs when he can, says, “I had the same experience when I arrived. I ask guys how they’re doing, what they need. They have many needs and are comfortable talking to me.”

The desire to address this concern arose from workers themselves: first through Don Franciso and then through Street Level’s annual retreat for day laborers. The workers prioritized wage theft and enforcement of Oakland’s minimum wage law as the key issues for this year.

“At our weekly clinic,” continued Aguiar, “staff gather information. Sometimes simply calling the employer works. Other times we may have to write a letter. If that doesn’t work, we work with lawyers at Centro Legal de La Raza to take up the case, to take it to the Labor Commission or even a hearing.”

In the process, immigrant workers learn how to navigate the system.

“We want workers to be advocates for themselves,” Aguiar said. “The process gives them a voice at the local and state level with policies that directly affect them. It gives them a way to be active participants in the community. It builds their own leadership — day laborers have spoken at public meetings and hearings. Many go on to help us build coalitions with partner agencies like the Spanish Speaking Unity Council, Causa Justa and others.” 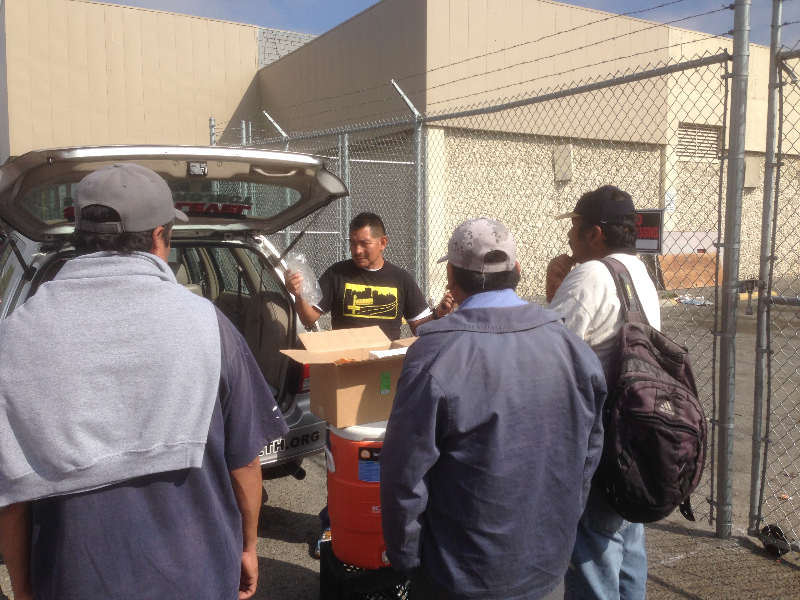 Don Francisco makes his final stop this Monday on the other side of International at the rear of Kragens. On food bank days, Mondays and Fridays, workers are treated to a warm breakfast and fruit. On other days, Francisco brings fruit, sweet milk coffee, and a variety of fresh rolls. He stops at up to 10 locations, wherever he sees groups of men at corners.  The men welcome the cold refreshments, a familiar face, and a kind word.

“Where I go depends on where the workers are,” says Don Francisco as we pull into the parking garage at Street Level. “Where they are is where I go.”

Inside, the clinic hums with intake workers.  A public health nurse and staff are ready to interpret in Spanish, Mongolian, and Mam. A dozen or so drop-in clients chat among themselves in the waiting room. The comforting smell of rice cooking — which will complement today’s meal of frijoles, chicken, cabbage and carrots — wafts through the building.

In the conference room, Antoinette Jenkins declares with enthusiasm, “I’ve used the services here for almost a year and just became an official volunteer. I help passing out snacks, with cleaning, and setting up tables.”

Her partner, James Moore, is still an unofficial volunteer. He folds the tables up and puts the chairs away. “The manly things,” as he puts it. “That’s just my contribution back to the center. They pass out hygiene kits so that there’s HIV awareness. They try to keep you aware of what’s going on. I’ve found myself in a homeless predicament. Their doors are wide open here; they don’t turn away people. They’re here for you.You might get a little hungry, but here there is no reason for a person to starve. When you wake up with a full stomach, you end up feeling a whole lot better.”