My grandmother Minnie was quite the woman. She was the first Alaskan Native Athabascan woman to win the title of Miss Alaska, back in 1940. 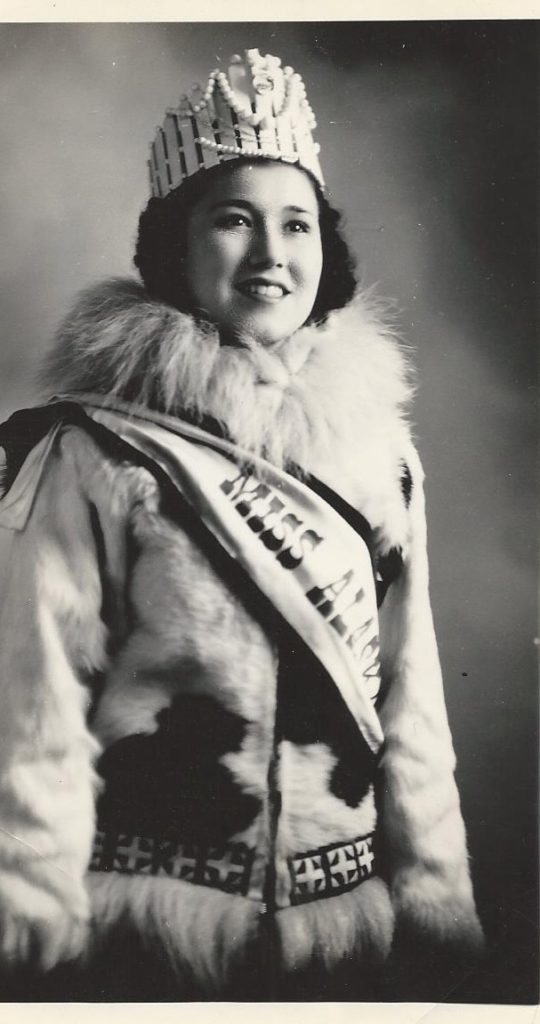 What an amazing opportunity for a young native woman whose fishing village Nulato, Alaska was only accessible by air. There were no roads in or out, and even today it remains that way. There was no electricity or running water.

My grandmother was the second youngest, and unfortunately her mother passed away when she was just 13.  Those humble beginnings did not stop her from following her dreams. She decided to enter the Miss Fairbanks competition, which she won, and therefore was entered into the Miss Alaska pageant. What courage it must have taken for her to stand and compete in that arena with so many Caucasian women at such a segregated time in our country.

When she won the title of Miss Alaska, she was awarded a $600 shopping spree in New York City. We even have a clip from a newspaper at that time showing her getting off the airplane in her Athabascan regalia.

She loved her experience in the city, and after her reign as Miss Alaska 1940 – 1941 she decided to stay in the lower 48 as Alaskan’s call it. She later met my Irish grandfather and they had six children together.

They made their life, living in Long Island, New York. Since she was a brown-skinned, Native woman in a bi-racial marriage living in suburbia, there were certain things she did to fit in. She always wore her hair short; if it were long she would have looked too Native. She followed all the trends, but even then she still faced racism, living in an area that was not racially diverse. Instead of complaining, she assimilated.

She taught me that no matter where you come from, or however hard your childhood experience was, you still matter and you still have something to offer this world. Through her experience, she taught all of the women in our family to be proud of who we are, and to never think of ourselves as less than.

While she faced many challenges raising six children mostly on her own as my grandfather was a commercial airlines pilot and was away from home a lot, she didn’t complain. And she kept moving forward even though it must have been  a struggle.

I remember at her 90th birthday party a few years back. My aunt read to her a letter from one of the most famous Miss Alaska’s in recent history. Sarah Palin wrote to her to congratulate her on her 90th birthday. Being the feisty woman that she always was, my grandmother said, “Not Her.” Too funny.

I think it was then that I realized what a star my Granny was. She was a beauty queen, the matriarch of our family, and most importantly, a beautiful soul. Here is a woman who raised six children, the youngest of whom was autistic, all the while retaining her beauty and strength. A true example of one woman’s resilience.