Going to Prison, Part II: Getting In, the Visiting Room, and Lockdown 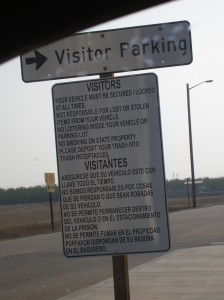 After my visit with Lt. Smith, I had some time to kill that Friday evening in Delano, California. While there may be more than meets the tourist eye, what the casual passer-through will see is mile after mile of strip malls and giant shopping complexes. The prison appears to the main industry there, except for retail and fast food.

I had an appointment to visit Lam the next morning at 8:00 a.m. Being obsessively punctual in all things, I arrived at 6:45 a.m. at the visitors’ parking lot. I was the second person there, after a young woman in her twenties, there to visit her child’s father, although the little boy was not with her.

It was briskly cold that December weekend. Before long, lots of other visitors started showing up, almost all of them women, many of them scantily clad within the confines of the prison’s visitor protocols – nothing too tight, short and revealing. Still, most were wearing not much for a wintry day. Most were wives and girlfriends, their men having been in for years already in some cases, for second or third times, and many with long sentences yet to serve.

There were a few men, including one man visiting his husband, and some young children, most of whom seemed to be under 10. I am pretty sure I was the only teacher there to visit a former student. Some of the visitors had driven all night from Sacramento, LA, San Diego and other distant points, because they could not afford the price of a hotel – at least $60 even for the cheapest digs in town.

We stood shivering in the parking lot for some time at an outdoor processing area until a woman dressed in a just barely-within-the-regulations, paper-thin dress and six-inch heels walked right past us at 7:30 a.m., saying the rules had changed and visitors were now allowed to wait indoors.

We walked briskly to the Visitors’ Center –  the first of several legs of a fairly long walk, probably close to half a mile from the parking lot to the actual visiting room. Everyone had their plastic bags full of quarters to purchase food (or what passes for food) from the vending machines, their IDs and nothing else.  Several people told me that I would not be allowed to bring in the pad of paper and pens I was carrying. “I have a note,” I said sheepishly, feeling like some 10-year old getting special permission to break the rules.

There was also a machine to purchase tokens at $2 each if you wanted to take a photo of the inmate, since as visitors we could not bring in cameras or cell phones, although apparently these things get smuggled in all the time. People are creative!

One of the other women told me that an 8:00 a.m. appointment would likely start at 9.  A bit after 8, they called me to step into the screening area.  I showed the Correctional Officer (CO) my note. “This says only one pen,” he said. “You have two.” I explained I wanted an extra in case one pen ran out of ink.

He disassembled both pens and looked at them. Satisfied, I guess, that I was not smuggling anything, he put the pens along with my ID in a tray and handed them over to be passed through a baggage screener, as I stepped through the metal detector.

I got a Visitor’s Pass and, along with a few other visitors, stepped into a gated area surrounded by an electrified fence topped off with barbed wire. A guard in a watchtower buzzed into another very tiny area, where he waited for the first gate to shut behind us, and then opened the second gate.

Then began the quarter-mile walk towards the visitation room. I was impressed at the speed with which the woman with the six-inch heels was walking. She beat most of us of the dozen or so visitors to the waiting area.

We laid our passes and ID on the counter and waiting for another CO to look at them. By this point, it was about 8:40. As we waited, I struck up a conversation with the mother of a young man sentenced to life for a botched burglary/homicide related to drug trafficking. We chatted about about the dress code for visitors, such as the “no underwire bra” rule for women. “I had to buy a new bra to visit my son,” she said. “I call it my ‘prison bra.’”

At what appeared to me to be a completely random moment, the CO starting calling people into the huge visitation room. We handed over our passes, and were assigned to sit and wait at particular tables.

It was a long wait. Many visitors spread out a huge junk food banquet of candy, cookies, cakes, packaged burritos, and soda on the table – perhaps $20 worth of food. I had some quarters in case Lam wanted a candy bar or one of the other junk food treats from the long row of vending machines against one wall.

I asked the CO why he had not come out, and he said he didn’t know, but maybe he was taking a shower or just not ready.  I had plenty of time to observe the other inmates and their visitors. Sometimes there was just talk, but often there were hands held, heads laid on shoulders, sitting thigh to thigh, hands in the other’s hair, a bit of surreptitious kissing. Sometimes they would get up and slowly circle the room, hand in hand, many laps going nowhere. 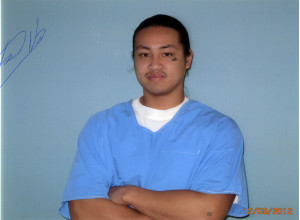 Finally, at 10:10 – more than 2 hours after my appointment – he came out.  He told me they had only told him he had a visitor five minutes earlier.

I wondered if I would recognize him. Although I knew he would be one of the few Asians there, it had been more than five years since our last encounter. I also had been wondering about how to greet him. If I were a guy, I probably would have just gone with a handshake. Somehow as a woman, I felt like maybe something warmer would be expected. Still, I wasn’t sure if a hug was appropriate, or if it would be uncomfortable. But he recognized me (students from years ago always recognize me, all over Oakland; after 20 years, this is pretty much a few times a month), and it was easy to engage in a brief hug.

It was easier to slip into conversation than I thought it would be. I started off talking about his family’s immigration from Vietnam. I had been planning at first, to stay until Noon, but since we got started so late, I was deciding to stay until visiting hours ended at 2:15.

Suddenly – less than half an hour into my visit  with Lam – the CO got on the loudspeaker and announced the prison was on lockdown, that the inmates were to return to their cells, and the visitors were to leave. We all sat there for a moment in stunned silence.

The prison changed course and said the visitors could not leave, but the inmates had to go to their cells. At first, we were told that they might come back. We waited for an hour and half, until they told us all to leave. While it was an inconvenience and an annoyance for me, I felt more for those who had driven all night and would drive home without much of a visit  – or any visit, in some cases, as we saw plenty of visitors on our way out who were still in the waiting room.

We would later learn that an inmate had attempted to escape in a delivery truck. He was not successful, but did effectively end visiting hours for Saturday. I hoped to come back on Sunday, but was told that it was possible the lockdown would continue. Nothing to do at that moment, except find the least fast-foodish restaurant for lunch and hope for the best the next day.

Next: Prison Visit Part III: Getting the Backstory