Right Around The Corner From It 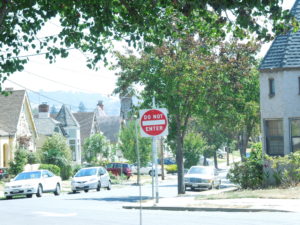 Although Picardy Avenue is in the “flat lands,” the street is always well paved and clean. The residents put on a spectacular Christmas light show every year. Photo: Michael Holland, Oakland Voices 2012.

Navigating through East Oakland, you will see two types of blocks. Some streets are well-paved. Those are usually lined with trees that bear fruit and nuts, and some that give color according to the season.

The tree-lined, well-paved streets didn’t just get that way. They have been that way for years and they seem to be the only streets that stay well-kept.

Streets like Picardy Ave. (off of 55th Avenue)and Yuba Ave. are always free of potholes, and those two streets are in East Oakland’s so-called flat lands – an area often thought of as one filled with busted sidewalks and sagging homes.

The streets up in the Oakland Hills are often pristine, as well. That area boasts some of the most spectacular views of the Bay Area. The hills also have numerous species of plant and tree life. Squirrels can often be seen gnawing on acorns giving the hills a quaint, TV Land type of feeling. The murder, prostitution, and drug dealing that have put Oakland in the national spotlight must seem a world away. 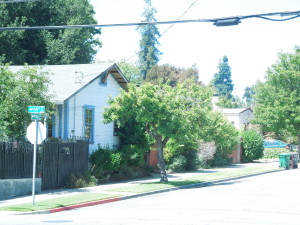 Some of those are right around the corner, on the other type of blocks. Those are inhabited by people who are mostly just like those living in the more crisp neighborhoods. Often, the only differences are location and income.

For example, here in the flat sections of The Town, there is an abundance of trees, just like in the more affluent parts of town. But if these trees could talk they would speak about bloody murder. Some murder that made the evening news, and some that didn’t. Murder that has not discriminated because of race. Of the 77 killings that occurred between New Year’s Day and late August, the majority of them were in the east – in the flat and foothill sections of the town, to be exact.

Schools have been declared Drug Free Zones. But when the sun goes down, those areas tend to take on a whole different attitude. Here are some so-called Drug Free Zones that double as dope spots: 23rd Ave. (from E. 19th to E. 27th Streets), 82nd Ave. (almost every block from MacArthur to International Blvds.), Walnut ave. (between 101st and 102nd Aves.), 48th Ave. , and the list goes on, and is expanding at an awful rate. All these spots are in walking distance of schools such as Fremont High, St. Louis Bertrand, and St. Anthony. These are only a few.

Sadly, my 5 year-old’s new school, Green Leaf Elementary,  seems to be around the corner from some questionable characters. After dropping her off at school one morning, I witnessed what I perceived to be a prostitute getting out of a John’s car on 64th and International.

Maybe she was coming from a video shoot. Maybe she wasn’t a hooker?  Nah. I’ve been in the world long enough to know what a “street worker” looks like! 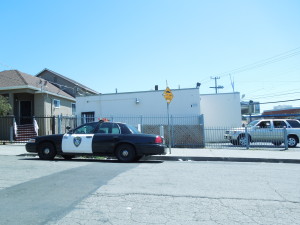 The corner of 48th Ave. and Foothill Blvd. was the scene of an early morning homicide late last month. The crime scene was in a “Drug Free Zone” around the corner from Fremont High and a residential area. Photo: Michael Holland, Oakland Voices 2012.

Oakland Police have a difficult job. I am usually very critical of them, but with all the violence during the summer of 2012, I actually applaud their attempt to curb the killings. Sadly the makeshift memorials scattered around Oakland are a sign that more crime prevention is needed.

And they seem to be trying. OPD has stepped up patrols in some of the troubled areas – Jean Quan’s 100 Block Plan in action – but more are still needed.

Living on a block that is well-paved and lined with trees seems like the ideal setting for a peaceful life. But if you live in this city and you’ve got a home on one of those sorts of streets, you aren’t far from the potholes, dope houses, and blood shed that make life hard in some of your fellow Oaklanders.

In fact, you are right around the corner from it.