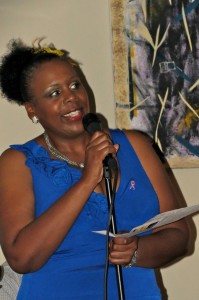 As the three-piece band takes the stage in the dimly-lit room, the crowd begins to sway and snap their fingers to the music as Tamika Nicole takes the stage. Just as Nicole so elegantly approaches the microphone – with soul and grace – she begins to sing “At Last.” Etta James would be proud.

But Ladies Rock Da Mic is not your average mini-concert. This event is an opportunity for concert-goers and performers to give back to communities in Oakland. These monthly concerts allow singers to “do good in the neighborhood,” says Nicole, who co-founded Ladies in 2011. Some of the funds from tonight’s event will go towards the American Cancer Society in recognition of Breast Cancer Awareness Month.

Nicole, 37, has been an Oakland resident for more than half her life, and is determined to show that there are more positive aspects to Oakland’s communities and their members. Each singer that performs donates their time and talents to raise funds and awareness about issues that are impacting Oakland – such as breast cancer, prostitution, education, and violence.

The singers sometimes have personal connections to the issues. In 1999, Nicole lost her mother to breast cancer. “It came sudden, fast, and in a hurry,” she remembers.

Hosting a fundraiser to fight the disease is in some ways and opportunity to honor the legacy of her mother – who Nicole credits for her giving nature. “Growing up near 82nd and Bancroft, we didn’t have much,” says Nicole, “but my mother would take me and other kids on the bus to the museum.”

That community-focused spirit of sharing is a driving force behind Ladies. For two soul-filled hours, the audience is treated to the raw talent that each and ever singer possesses. Each act brings to the stage their passion for helping others and for singing. The energy is infectious as the singers lead the near capacity crowd in rock, R&B, and jazz songs. With their voices, the singers unify the audience in song, and in the spirit of giving.

Monica “Lady Soul” Murphy, 36, is a long time Oakland resident, and has been a part of Ladies since she participated in one of their open mic events earlier this year.  For Murphy, not only are these events opportunities for her to give back to Oakland – her hometown, they are also chances for “women to come together and sing as a group – with positivity and no judgment,” she says.

Murphy also wants the world to know that there is “a lot of talent in Oakland. The city is more than killing and prostitution.”

For Ladies Rock Da Mic, the heart and soul that comes through their vocals has the ability to lift and unify Oakland.