I decided I would visit Lam in prison. But prison is not a place where 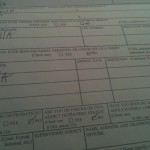 you drop in spontaneously. First, you must be approved for visitation, which requires the inmate to snail mail you the Visiting Questionnaire. The California Department of Corrections (CDC) would like to know if you have visited other inmates, if you have been detained, arrested or convicted, (and if so, where/when and type of offense). The CDC also asks if you are on probation, parole or “civil addict outpatient” status, or if you have been incarcerated as an adult or juvenile, if you are under any type of court imposed program.

Fortunately, I was able to answer these questions in the negative, which doubtless was some grease for the rather slow-moving, bureaucratic wheels of the prison system.

You cannot request the form. The inmate must mail it to you. I got a letter from Lam at the end of the September saying the visiting form was enclosed but somehow – perhaps when the letter was read by some CDC staff person – the form was not in there when I got it.

It arrived 6 weeks later, right before Thanksgiving, and I was told it would take two or three months to be approved. I contacted the Public Information Officer, Lt. Jeff Smith. I explained that I was writing this story and I would not be able to visit in three months after I returned to teaching school full-time. He was very helpful, getting me cleared in just ten or so days.

Before my visit Lam and I were able to speak on the phone – a difficult process. It is not possible to call inmates. They must call you collect. They are restricted to certain times and days – in Lam’s case, Wednesday through Sunday, from 8:00 a.m. to 12:00 noon, and the phone calls must be no longer than 15 minutes.

I was initially told it would be best to have Lam call me on a non-home phone number, so I had sent him an email suggesting he call me at the Maynard Institute at a specific day and time. As predicted, he did not call then. I later learned he hadn’t gotten any of my letters because they were on lockdown for several weeks. Lockdown is something that happens a lot.

I decided to just ask him to call me at home, which still took several weeks. But he finally did call me in mid-November, perhaps after my responding to an interest he expressed in reading more history books with an offer to send him a few which he could request when we spoke by phone.

The phone call comes from GTI, and is announced by a recording saying it is a collect call from a correctional facility and asking if you would accept (and agree to pay for) the call. I did. It was probably equally strange for both of us to speak on the phone after having only exchanged a few letters over the period of a few months, and having had only a very perfunctory teacher-student relationship previously, which had ended more than five years earlier. Yet, it was much easier and more natural than expected, except that the call was interrupted every few minutes by an announcement reminding me that I was speaking to an inmate at a correctional facility.

Lam has more phone privileges than some other inmates, due in part to his behavior. He can make a phone call every day that he has phone access, if he wishes, whereas other inmates may be limited to once a week or even once a month.

I wonder if the punishments and limitations usually imposed on the people who are having the hardest time really results in any improvement or change in their behavior. From teaching, having tried this approach multiple times, I would have to say no. It probably produces quite the opposite result.

But I was able to speak with Lam, who is apparently going along with the program, such as it may be in prison. I let him know I’d be coming in person the first weekend in December.

Next: Going to Prison, Part I