Lam and I Both Move On

During the Fall semester of 2007, I was teaching in the OUSD Independent Study Program, seeing about 30 or so students per week, individually and in small groups by grade level and course.  Lam was in my group of 11th grade students. We were studying American history since Reconstruction and reading American literature from about the same period through the present.

At the same time, I was in my 16th year with the district, and I was considering my next option as an educator.  I liked teaching, loved the Independent Study Program where discipline was rarely a factor, and I could get to know students in a more human way. I felt I was at the top of my game.

Still, I was starting to feel a bit restless, in need of a new challenge. I had completed certification in online teaching and learning, and then I got a job as the Distance Learning Coordinator for Oakland Adult & Career Education. I was scheduled to start that December.

In the end, I decided, though, it was too good an opportunity to pass up. I told my colleagues just before winter break, but I didn’t tell the students until the last meetings that I had with them. 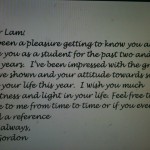 I wrote each student a personal note, and gave each of them a small candle in the shape of a heart, and some chocolate candy.  To Lam, I wrote:

It’s been a pleasure getting to know you and have you as a student for the past two and a half years.  I’ve been impressed with the growth you’ve shown and your attitude towards school and your life this year.  I wish you much sweetness and light in your life. Feel free to write to me from time to time or if you ever need a reference

In my notes about Lam to the next teacher, I wrote, “Pretty good attendance, gets work done. An occasional absence.  A bit behind in math but catching up.”

I quickly became totally absorbed in the new assignment, and mostly lost touch with my students. I went back to visit Independent Study at the end of the school year to see my seniors graduate. Not all of them made it, due to either not completing coursework or not passing the California High School Exit Exam (CAHSEE). Would they have been more successful if I had stayed? I could not say, but I felt sad.  There is always a sense that when a student does not achieve academically – or even otherwise  – that I should or could have done more.

A year later, still feeling attached to my former students, I wanted to attend the Independent Study graduation, because some of “my” students, including Lam, were supposed to walk.

But a colleague told me he was not graduating. I sent him this email in May, 2009:

If there is something I can help you with, please let me know. If you recall, when I left Independent Study, I started working at Oakland Adult & Career Education.  Adult school might be an option for you if you are not graduating elsewhere.

Hope all is well, but if you need help, let me know!

He never wrote back.  He also went on to new adventures, which eventually landed  him in prison, but I did not know this at the time. A year and a half later, in December 2010, I read about him in the Oakland Tribune.

Next: The Oakland Tribune Story