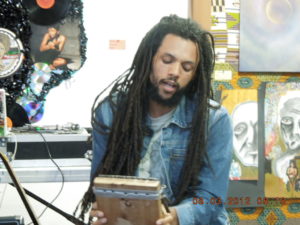 Do you want to feel good? Let go, and step into another world?

If you live in Oakland, you don’t have to go far.

Just downtown, at the corner of 14th Street and Franklin, is a magical place – an art gallery called Omiiroo. The name means “way too black” in Kenyan slang. It’s an all volunteer, community-based pop-up.

No one person owns Omiiroo. Instead, a group of artists run it as a cooperative, which makes the place feel a lot like home. Rahel, a guest who visits the space “every 2 or 3 days,” said Omiiroo “is like a family.”

At this art gallery and performance space, you won’t feel like you need a reason to be there.  You can just be.

When I visited the gallery one evening as they prepared for a First Friday Art Walk, I found Rahel, who is in her late 20s, nursing her infant son. No one at the gallery batted an eye at such a natural display of motherhood.

But then Omiiroo is not like the traditional white-walled gallery, where the art is so meticulously displayed that even the most avant-garde exhibits seem precious.

The scene at Omiiroo was similar to a live/work studio loft, with dirty brushes, messy paint cans, and other supplies tucked in the corners, readily available for any spontaneous burst of inspiration.

Painted right onto the walls, beside the hanging art, were outlines of large insects and flowers. And rough cut, jewel-colored fabrics, gracefully draped like valances above carefully arranged art.

While the simplified presentation of the art drew me in on an organic level, the real action was with the artists as they got ready for the Art Walk.

Newsom’s art that graced the walls had a feminine theme. Beautiful, colorful hair flowing freely like roots extending from a tree, or woven, textured Afros crowning bronzed heads. “It’s built to empower women that want to have a voice.”

She said her work “represents the black community and politics.” Newsom uses “urban  pop surrealism” to turn those complex topics “into something relatable.”

Newsom and about a dozen other artists worked as DJ BeatsMe – part of the local group D2S – spun old school hip hop and R&B.

Dancing near the dj table was Tattiana Aqeel, of the Bay Area group Samba Funk. The 24 year-old DC native,who moved to Oakland last December, later performed a stirring, original song on acoustic guitar with her partner, Lisa Harris – a spoken word “abstract” artist who described her work as a “psychedelic elephant.”

Omiiroo is that kind of place, where people are invited to come and play around – with words, with colors, and with the music.

But making a space even for the most free artistic expression took careful planning and collaboration. The reception marked the end of a month-long exhibition that featured Africa-centered work by six female artists from across the country. One of the curators was Aqueene Simran, 34, who gently rubbed her pregnant belly, and smiled when she talked about the exhibition. “A lot of work went into the show.”

The art exhibition was reflective of the historic significance of women of African ancestry owning their beauty and power with many images that contained modern references to common stereotypes. The pieces also had stark, unmistakable social and political overtones. 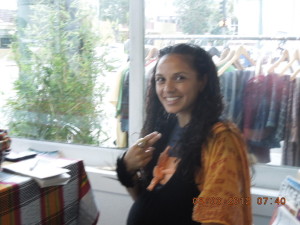 In addition to curating shows, Simran was also organizing events and performances at Omiiroo, even in her third trimester. Her commitment was a testament to the casual, roll-your-sleeves-up work ethic that is integral to the gallery’s self-sufficiency.

Kenyan artist Githinji Mbire is another critical part of Omiiroo’s collective creativity. His nearly six-foot tall canvas bears a message spelled out in a multicolored collage of fonts: “I’m a queen not a bitch.” It’s spelled out inside a huge silhouette of Africa.

The image of the continent is central to Mbire’s work. His signature piece is a massive, mosaic rendering of Africa. Like much of his work, this piece focuses on self-sufficiency in black communities. Mbire said it also is symbolic of a concept central to  his art and Omiiroo’s Afrocentric ethos: “solving our own problems.”

Sasha Kelly, another core member of the cooperative team, agreed. She also explained that, unlike many traditional galleries, Omiiroo’s motivation “is not necessarily profit-based. (It’s) more of allowing passers-by to see art.”

It may also give people unfettered access to non-traditional, socially conscious art that isn’t profit-driven by mainstream corporate interests.

Omiiroo’s central location is ideal for creative types in the area who want to check out their peers, or just neighborhood folks stopping through.

For many of those who have shared space there the way I have, it just represents local love.