I love hip-hop and rap music; they’re my favorite genres.  Don’t get me wrong, I like jazz, R&B, reggae, soca, salsa, hard rock, pop, alternative, and etcetera, so I do have diversified taste.  However, what makes me go crazy/lose my mind is words on a drum beat.  I’m not a radiohead, but when I listen to music, my first choice is rap.

I found out about the perfect spot for me on the SF Funcheap website, 01/17/18:  The Hiero Beats Cafe, “a free creative space to work, make music, chill, eat, smoke, and sip hot drinks and discover the best hip hop, soul-jazz and Afrobeat tracks that don’t get enough shine on mainstream channels.”  Excited to also learn about their free wifi, I added the event to my calendar.

I had to hunt for this place.  The address said 1200 50th Avenue but if it wasn’t for the fact I could hear music, I’d have walked another block.  I was standing on the corner twisting and turning like I was in the matrix.  In front of me was East 9th Street and I could see the BART train tracks.  Kitty-corner was what appeared to be a closed entrance to a door that read WaxPoeTic.  To my left, non-apparent buildings, but to my right, there was music that sounded like it was coming from a double parked car.  After several minutes, I decided to go in that direction and finally across from it, I could see an open door with the hiero logo on it, that turned out to be Hiero Beats Cafe!

My first impression was — it looks more like a SF/Berkeley-style hangout, with lots of used sofas, for I had expected table and chairs.  I continued walking in, smiling and speaking to the dejay, hostess, and a couple of patrons.  I sat my belongings down, looked around, most particularly at the vinyl wax station, when the hostess invited me to have some coffee or tea.  I learned the beverages and food are for the donation of $2-5.  I later inquired and found out the vinyl albums cost up to $20.

I thought the ad said the cafe was new.  I didn’t realize it until arriving at the front door that I had been there once before. I assumed it was a re-opening.  The hostess said they’ve always been there and I re-learned it’s open every third Friday from 11 am-6 pm.  I guess I didn’t add that to my calendar the last time but have now.

The place is big and the atmosphere was relaxed and comfortable with great music and videos as I pecked away at my computer until a half an hour before closing.  There were about 15 patrons during my visit.  A few were smoking marijuana (legal to all adults now); a few, on their laptops; two women who appeared to be friends sipping on coffee and tea like everyone else; a fella with his electronic keyboard and there was one group of four in deep discussion.

The ad said they have a recording studio but I didn’t venture off to see it.  I’m always up for some extra cash and adventure so it did interest me but I had a few shopping bags with me.  I believe I can hold a note and used to joke about how I can for sure sing two lines of lyrics over and over again in a rap song.  I didn’t make any connections but left with a couple of demo tapes I can’t wait to listen to, some stickers and I signed up to participate in an upcoming video.

The cafe is run by Hieroglyphics Imperium based out of East Oakland since 1997.  The offices are on top of Beats Cafe.  I had volunteered for their annual concert that was held in West Oakland last September which is why I associated with the name Hiero.  Believe it or not, I missed the volunteer orientation because I couldn’t find the place, stopping across the street from it and ending up near 50th Street in North Oakland!  The event was a huge, hip-hop/rap music scene with many food and merchandise vendors.

Perusing their website, facebook, twitter and youtube webpages, I learned they perform and hold other events and in other US cities. There are approximately 10 members with different webpages and sites. They sell merchandise and were mentioned throughout the web.  “Hieroglyphics was founded by all of the members when they all lost major record deals from companies such as Jive and Electra Records,” according to the website,” finding the music label business very political.”

I emailed them eight questions to complete my article.  Tell me something about the cafe and Hieroglyphics that isn’t already available online.  How was the cafe idea derived?  How long has it existed?  How many members are there in Hieroglyphics?  Who/what is waxpoetic, a record label, a deejay?  How many albums are on your label?  Who/how came up with your business logo?  How much does it cost to use the studio and when is it available?

A few days went by and I hadn’t received a reply to my email but lucked out when I received a notification from Facebook that they were opening that day.  I lucked out again when I arrived and the deejay, who I later learned was filling in, was there alone.

Branden aka Bsidez510, who runs their merchandise warehouse and website ,graciously shared that he came to the company and label Hieroglyphics Imperium Recordings approximately five years ago.  He grew up listening to the group of nine that has four collaborative releases to date on their independent label.  He’s not included in the original group including Soul Mischief (Tahjay, Opio, A+, Phestodec), Dell, Casual, Pep Love, Domino and DJ Toure, but has been involved in a few of their projects.  Casual is the CEO who grew up around Seminary; Dell is a producer and MC; Pep Love runs Wax Poetic and Beats Cafe; Domino is a producer and manager.  Individually, they each have four to five separate releases.  Bsidez510 has a CD that will be released later this year.

The cafe has two stages, professional industry equipment, and two recording studios, one being DJ Toure’s.  They encourage each other and other artists to use the cafe as a venue for events.  Wax Poetic Day is a party thrown every first Sunday.  They all perform worldwide; Pep Love was performing in Colorado on my second visit.  This year will be their 7th Hiero Day.  The mayor had officially deemed it as a city holiday when they were located in West Oakland.  It occurs on September 3rd around Labor Day because 93 Until Infinity is their biggest hit, released on that date.  The members work with several companies throughout the Bay to upkeep their brand including but not limited to Blume, Weedmaps, Oaklandish, and the Oakland A’s – they made t-shirts for the A’s and threw the first pitch at one of their games.  Their next event is a first Friday art show on March 2nd at the E14
Gallery in Old Oakland. 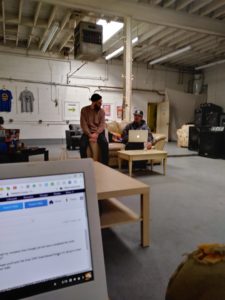 What Counts: In Conversation about Public Safety

When every outlet from CNN to Fox leads with Oakland’s unprecedented crime wave, it causes concern and invites fear. But what does it mean? Really. California is among the 20 most dangerous states in America. […]

Some of Jill’s students have terminal conditions, which affects her deeply. “I get incredibly emotional,” she said. “There is often all sorts of other things going on in the family. You’re in their house. You get very involved with these kids. I had a student who was getting dialysis six days a week, and there were four other sons. I couldn’t help but try to do all sorts of things. I bought groceries, helped with their other kids.”

Jill often finds herself offering comfort to the family. “The mothers cry, and I cry. A lot of students are dealing not only with being ill, they feel like they’re being punished. And the parents often feel so guilty, feeling ‘how come I, as a mother, couldn’t have prevented this?’” […]

A Message to Oakland: Love’s in Need of Love Today

Is there any love left in The Town? If we look at the homicide rate of 2012 alone, one might say that love is impossible, if not non-existent. But I beg to differ. I see the love here. […]