A Day in the Life of Lam Vo

Lam ended a recent letter with “Write me when you find the time. I certainly have all the time in the world to wait.” This prompted me to ask him what it is really like to be living in prison and what typical days are like. He sent me a detailed account.

Five days a week, Lam gets up at 6:00 to work. Saturday through Wednesday, he’s a porter, helping with meal trays, including counting them after inmates eat to be sure they have all been returned. If not, there will be a lockdown until everything is accounted for. After breakfast, he has free time until he is allowed access to the showers at around 11:00 a.m.

During free time, he returns to his cell, which he sometimes refers to as his “room.” He uses this time to sleep, write, draw, read, listen to music, or workout. Like many prisoners, Lam improvises his gym equipment. “I get garbage bags and use my measurement bottle to fill up the bag with water to the right weight. Next, I double-bag it, wrap it with a sheet as well to make a handle for it. I would also have bag full with old magazine and package catalog to make a lighter weight. So, I would have four different weighted bags to lift, so it feels like being at the gym.”

He also drew a picture of the exercise yard to which he has access three times a week. He said it’s about half the size of a football field, and has a soccer field, basketball and handball courts, and some pull-up bars and other equipment. 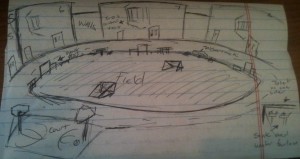 Lam included this drawing of the exercise yard in his last letter
Photo:Oakland Voices/Debora Gordon March 2013

Lam also described the educational programs available. “Monday – Friday they have education and vocation which is school that does small engine and welding.  These people are put on the program because they (want) to complete the program to add to their file and receive A1A status.”

At that level, he wrote, “you’ll have more privileges, while C status when (you’re) not (allowed) much property in your cell and (not being allowed to) go to day room. C status are for people who isn’t programming an assign class.

“Besides yard, we have day room at night at 7:00 p.m.  A, B C take turn having day room for each night and it last about 1 hour 45 minutes. I lock up at 8:45 but for me,I go in at 8:00, I am in close custody which mean I can’t be out at certain time because of my case. High risk, I guess, but I should be getting out of it soon. You only have to be on it for a year. It’s basically to monitor your behavior and see if your (sic) any danger.

I was surprised to learn that Lam has a television in his cell as well as other entertainment equipment. “I usually have my TV turned off til 5 or 6 and watch all the prime show on ABC, CBS, NBC, PBS, CNN or whatever good show. I sleep around 10-11 p.m.”

Lam wrote that he looks forward to mail, phone calls, canteen options where they purchase food online, and his two days off work. “On those days, I actually enjoy spending time in my cell. I have the option to go to both yard or stay in. To be honest, I like being in my room because I got everything I need in here. I love it especially when my celly is not here so I have time to myself. People here are nice to communicate with, but it’s not the same as your friends.”