“I learn from my students every day,” says Oakland artist and high school teacher Todd Elkin. “What is going in my classroom is a dialogue between myself and my students.” Describing himself as a hybrid of artist and teacher, he says both skill sets are continually informing each other. 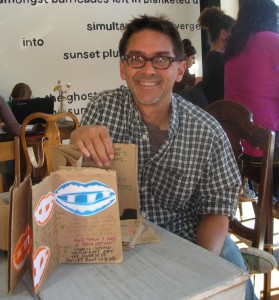 “A great teacher has purpose,” Todd explains. He asks students, “’Why do you want to be an artist?’” He believes that creating art is makes a political statement. He characterizes his own art as street art addressing the issues of the day.

While he does not see himself as a traditional realist, if you were in an art class at Washington High School in Fremont, you would also learn the basic skills of art, including drawing, color theory, and painting.

Todd began teaching in 1998, after previous art-related careers as printmaker and an illustrator for the Village Voice and other publications, in New York,  He transitioned into teaching in 1998, after he was invited to volunteer at a nearby pre-school he would pass each day when taking his  daughter out for a walk.   He has taught all ages from pre-school through adults, including teachers, having been an elementary school art teacher at a small alternative elementary school, where he taught all the students in the school, from grades K-6.

He described students in grades four through six as “the sweet spot;” before self-consciousness sets in, and at an age where students are much freer in their drawing.  He points out that there is a lot of “noise” in the lives of teens, defense mechanisms,” to which he responds by viewing it as a personal challenge. In addition to his work as a high school teacher.

Todd takes a constructivist approach to teaching art, “We want students to be driving their own inquiry. 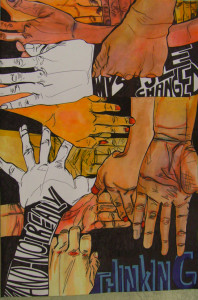 The best artists are just very curious about the world,” and he inculcates this in his classroom through projects such as “The Shelter Project,” an interdisciplinary unit which grew out of his own reading, after he finished a book called “Planet of Slums” by Mike Davis, describing mega-slums in and near the cities of the world.  Eventually, students built site specific shelters which overtook an area of the high school campus, and corresponded via the Internet with students from all over the world, documenting some of their work and inquiry in the class blogs Todd always maintains for his classes. Todd got a Bachelor of Fine Arts from San Francisco Art Institute and some years later, was later invited to study and eventually teach at Project Zero at Harvard, where he also earned his Master’s in Education.   Over the years, Todd’s teaching practice has expanded to include a focus on contemporary artists, whom he describes as ideal role models for students.

He sees his art classes as increasingly interdisciplinary, as students are making art , they are also investigating science, history, and technology. He believes that artists are by nature pro-active, andhe introduces students to contemporary artists, which has been greatly facilitated by the Art 21 series, which features artists talking about process, and talking about themselves as artists in the modern world. 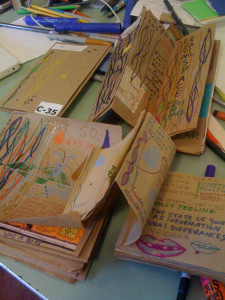 Accordion books are an important part of the creative process, where students document their creatives processes
Photograph by Todd Elkin

Students learn about “grabbiness,” and are asked to define what grabs their attention. Toward that end, students document their process, by making, and drawing in accordion books and other journals and sharing their ideas with their own and other classes through blogs.  “The real project of art education,” he tells me, “is artistic thinking.”

Todd loves teaching and finds it is always rewarding.  “When students have terrible experiences in school, they often have success in my classroom.” He described a boy who was a graffiti artist, failing classes, disengaged.  Todd invited the student to help him co-teach a unit on graffiti as art. The student planned and taught classes for an entire day, teaching vocabulary, and telling his own story. Students came up to him afterwards with questions and treating him with a new respect.  The student subsequently underwent a profound transformation, eventually graduating, and now, in his 20’s, holding down a responsible job.

Todd describes the challenges of teaching as including the narrowing of the curriculum, No Child Left Behind (NCLB), standardized assessments, and ranking teachers on test scores.  One significant change he would be interested in implementing would be the breaking down of the walls among different disciplines, and facilitating collaboration among teachers of different subjects.

Todd expects to work as an artist and a teacher for as long as he is able.  When asked what has been his greatest disappointment as a teacher, he replied, “The work is never disappointing.”