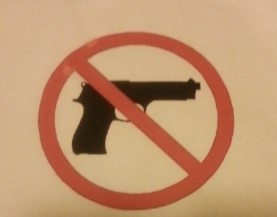 My friend Alice came to the US in May last year. And we met each other at the English Center –  a non-profit organization that helps immigrants, refugees and international students improve English skills and find jobs.

We graduated and went our separate ways, only to be reunited earlier this year – this time, as two non-citizens working on an election 2012 effort. We were part of a non-profit organization called Asian Pacific Environment Network, and our jobs were to educate and mobilize Asian-American voters around California propositions. This was our first time being part of the American democratic process.

Through this experience, Alice observed a lot of differences between the US and China. One of the biggest, she said, was that Americans have more freedom.

From my perspective, the freedom in the US isn’t as free as many people may want to believe.

First of all, the Constitution promises us freedom of speech. However, speaking freely does not mean talking without respect. People are very straightforward when they talk here. It is good to be honest, but not to forget to care about others’ feeling as well. We must talk with respect. It is like applying the “clear and present danger” doctrine to human relationships.

Secondly, people have the legal right to own guns. In many states, people can carry them out in the open. And what we see regularly on the news are  gunshot-caused deaths, robberies at gunpoint, even students bringing guns to school. The tragedies that happened at Oikos University here in Oakland, and at Sandy Hook Elementary School in Connecticut should warn us of how evil it is for residents to have their own guns. Emphasizing how gun violence has been affecting our communities is less effective than abandoning guns lawfully in California. Our freedom of going out for a walk at night time is taken. When rights threaten people’s safety, those rights should be seriously reconsidered and limited.

Wing Wak Restaurant, located at MacArthur Blvd and Maple street in Oakland,  has been robbed at least 8 times during its 14 years of business.  And many times, robberies happened in the middle of the day. The cashier said, “robberies happen so frequently in Oakland just like people eat lettuce every day.”

Because of the all the robberies, the restaurant only opens business for familiar customers after 7pm now. The owner said, “business has been so slow and it is hard to make a living. When laws allow residents to own guns, it means no safety in America.”

This brings me back to the question of freedom. In this country, people are free to buy, sell, and own guns. Those guns are being used to hurt other people – to impose on their rights and their lives. That is not the kind of freedom many people want for our society.

Jian Di Liang (Charlotte) is from China. She is enthusiastic, friendly and outgoing. Meeting new people and traveling are her biggest interests.