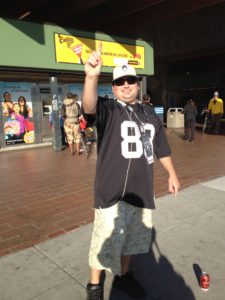 In Eastbay Jay’s book, the Oakland Raiders are number one. By Katherine Brown – Oakland Voices 2012.

Commitment to excellence. Pride and poise.

As a Raider fan, these words go far beyond mere mottos for a football team with such an esteemed legacy.

To me, these words are extensions of each and every fan that fills the stadium, as well as the spectators at home and the local sports bars that become fixed to TV screens on game day. From the kick-off until the final ticks of the play clock, we stand in solidarity.

As I sat at home last night and watched my Oakland Raiders take on the San Diego Chargers, I couldn’t help but feel connected to my brothers and sisters that filled the Oakland Coliseum. The deafening noise the crowd made when our team was close to scoring fueled the soul and spirit of the 12th man to try and shut down the drive. The community and culture of the Raider Nation was as solid as an impenetrable defensive line.

In that game, there was a mix of the good and the bad – unfortunately, there seemed to be way more of the latter.

Going through the emotional rollercoaster of that game, I couldn’t help but feel a familiarity. It’s as if this city and the Raiders share more than just turf. For both Oakland and its grid iron franchise, stellar legacies and deep talent are overshadowed by questionable leadership decisions, meaningless personal fouls, and unnecessary roughness on and off the field.

Sometimes, we just miss out on points, or forfeit yards. In the city, though, we lose lives. That’s no game. 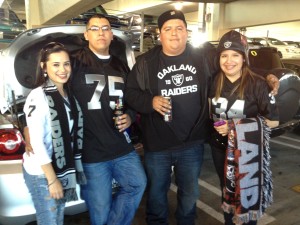 But there is at least one key difference between town and team. I feel that within the Raider Nation, we stay committed. In the city, though, there is not so much of cohesion or togetherness.

On the field, regardless how many careless errors were made or how the team beat themselves, die hard Raider fans stay in their seats, eyes fixed on the game, hoping for a miracle. Oakland could use some of that faith right now, too.

Of course, a lot of people work hard every day – including myself – to improve life for everyone in the East Bay. Not hoping, but making things happen. I grew up here, so I’m not about to give up on this city. Also, I don’t want to reduce our city’s many challenges to a simple football analogy. I just wish sometimes that in the face of adversity, we could come together the way the silver and black did last night.

And I am convinced that the team felt our energy. Despite being down by 16 points, with barely 2 minutes left on the clock in the fourth quarter, the Raiders scored their one and only touchdown. The crowd went crazy!

Then, the team went for two – yes! Even though it was clear that we wouldn’t win this game, the crowd still stayed connected.

Perhaps this is why we Raider fans feels so strongly about our team despite their adversities, fumbling (literally), and amateur hour mistakes – and that connection is rooted in the concept of hope.

Maybe if this concept was more reflective in my city, then like my team, we could have the potential to go all the way.