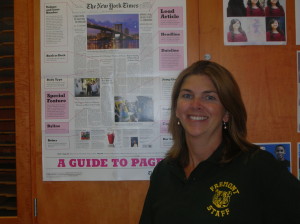 Lisa began her career as journalist, which opened the door to becoming a journalism teacher. She eventually became managing editor of a non-profit newspaper, the Oaktown Teen Times (OTT), which features stories by student journalists from 10 district high schools. An archive of past OTT editions can be seen at www.oaktownteentimes.org.  The Fremont High/Media Academy student newspaper can be seen at www.mediagreenandgold.com

Lisa was not a high school journalist but wishes she had been. “I think my life would have been so much more interesting and so much easier.” She described her high school self as a shy person. She later realized as she became a reporter how journalism helped her become more confident – a goal she has for her students as well.

Her experiences as a student were among the reasons she became a teacher. “At an early age, I really could tell the difference between a good teacher and a so-so teacher, and I wanted there to be more good teachers. It’s a lot more difficult than I ever thought it would be, but my goal is to try to give kids something I don’t feel like I had when I was young, having high standards.  Sometimes the classes were too easy.”

Lisa holds even higher standards because students’ writing is for school-wide, and district-wide publication, and sometimes beyond.  “Kids (may) have not been accountable to write and rewrite and rewrite and rewrite; so that’s tough, but then our paper wins awards, and although they might complain about the process when they do see the product, they say, ‘yeah, it was worth it.’”

The rewards of teaching sometimes come later, too.  Lisa showed me a letter she received from two June 2012 graduates. The two young women, now beginning college, wrote her “the biggest thing you did for us was helping us find our voice, you encouraged us to go beyond out limits and help us expand our horizons.”

“Students don’t always see this,” Lisa said. “It brought tears to my eyes.”  Lisa also finds it rewarding that she has to “continue learning to stay on top of my game, modeling what I’m teaching kids.  It’s a really cool profession to have, doing what you love.”

Long before considering teaching as a full-time occupation, Lisa spent some time wandering the world, including a stint in a Japanese exchange teaching program.  As a kid, she always loved to write. From an early age she was into a more journalistic style, rather than creative writing.

She later earned a master’s degree in journalism. She freelanced in the Midwest, got an internship with the Toledo Blade newspaper, and went back to Japan and worked on the Japan Times for a few months.

Later, while working for the Contra Costa Times,  she met a principal who offered her a job as a journalism teacher eventhough she had no teaching credential at the time. Her first week of school was the week of the September 11 attacks. She worked hard to help students focus on issues well beyond the schoolhouse door. 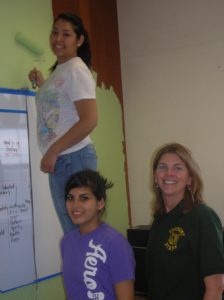 In 2006, she was really excited to learn that OUSD had a position that was all journalism. “I am so glad that I ended up working atMediaAcademy, because the principal was extremely supportive of student work.  The students have stories that are incredibly rich.”

Lisa expressed great modesty about being the subject of this profile, suggesting her students were more deserving of the spotlight. “The exciting part about my job is being a facilitator, an adviser and a guide to the kids, to tell their stories.  They’re the more interesting people.”

“I think journalism is trying to rediscover itself. It’s a very weird time for journalism. Teaching journalism, teaching newspaper production has always been a pretty difficult job. I’m very happy that OUSD understands the value of OTT and given me the resources.”

Know a teacher I should profile? Contact me at debora.gordon@gmail.com