Living in East Oakland is like having a close relationship with a problematic relative.  You can call your auntie “crazy,” because she’s your auntie, but you can’t let anyone outside the family call her crazy.  You understand that she’s multi-faceted and complex.  And yes, she can behave erratically, but this does not mitigate your connection or the value she brings to your life.

The news we often hear about Oakland relates to gun violence and other crime.  The media love to report how many shootings and murders happen in Oakland and compare the numbers to years past.  I’m not sure what objective this kind of reporting tries to meet.  Yes, there’s crime.  We can regurgitate stats but what does that really do?  Does reporting stats without context address historical and structural inequality that divides Oakland?  Does it explore the origins of why crime exists in the first place?  Or does it confirm the tired bias that Oakland is rife with inherently criminal brown people that actively choose this “lifestyle?”

East Oakland is peppered with symbols that mark the disproportionate death of people in the form of sidewalk memorials.  Despite the stigma of their relative or friend being involved in a crime, remaining loved ones show honor by displaying flowers, candles, toys, drinks, food, figurines, sports memorabilia—anything that represents their slain loved one.

One early morning in February, a shooting occurred in Jingletown.  Two young men shot another young man who was inside a car on a residential street.  According to my neighbor, they used semi-automatic weapons.  He told me our neighborhood hadn’t seen that level of violence, “in 30 years.”  I don’t know if that’s true, as I moved to Jingletown in 2011.  The shooting happened less than a block from my house, but I didn’t hear anything.  I only saw the memorial that the victim’s loved ones left near the scene of the shooting the next morning while walking my dogs. 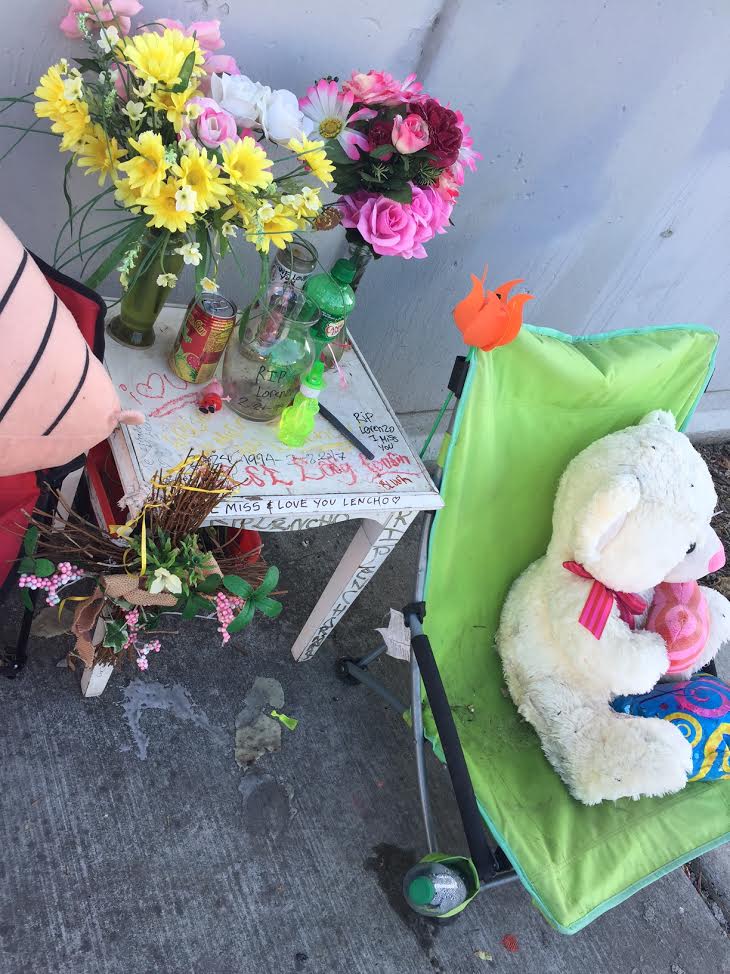 Lorenzo Castrejon was 22- years- old when he died.  He is clearly loved, because someone has cared for his sidewalk memorial on Chapman Street since February 9th.  It is now May and the memorial has survived record-breaking rainy days, as well as the chaos of Jingletown street life.   Currently, two new apartment buildings are being built, street construction constantly hums and large trucks enter and exit the neighborhood all day long.

People walk their dogs and push their carts up and down the streets daily.  It strikes me that despite the litter and car break-ins, nobody really disturbs this memorial.  Near the area where Lorenzo was shot and killed, on the sidewalk, two lawn chairs host a large stuffed teddy bear, a small penguin and a large stuffed Stewie from the show, Family Guy.  A small table with writing, “we miss and love you Lencho” supports vases filled with flowers, jars, drinks and figurines.  Someone comes by regularly to light candles.  They have maintained the shrine for over two months.

Some say these sidewalk memorials have African roots.  Some say that modern life has limited access to traditional cemeteries.  Some are offended by the liquor bottles.  Some add these details to confirm their bias that Oakland loves to celebrate violence.

I didn’t grow up in an urban environment.  I never saw sidewalk memorials.  I never heard of anyone being shot when I was in school.  I can relate, however, to the traditions and rituals communities create, perform and continue, to honor their loved ones.

My heart is moved by someone diligently lighting candles and tidying up this memorial that sits next to a major highway amid frenetic industry.  Someone makes time to keep Lorenzo’s memory alive.  Regardless of the circumstances where a young man lost his life, people loved him and are deeply affected by his absence.  The upkeep of his memorial must bring them solace and healing.

I walk by the memorial with my dogs every day.  They often express interest in the candy, the stuffed animals and the balloons tied to the chair arm.  “Don’t touch,” I tell them gently, “that’s a special place for someone who died and we have to be respectful.”  The candles flicker as we walk past and I marvel that they stay lit.