Healthy Food Access within a One-Mile Radius: A Conversation with Shaniece Alexander of OFPC 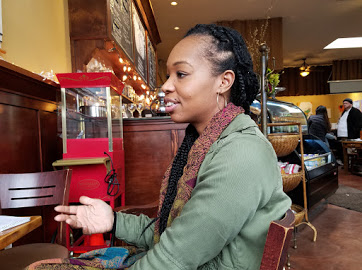 “Everyone in Oakland should have access to healthy, fresh food within a one-mile radius,” is one of Oakland Food Policy Council’s goals.

Food justice and access connect strongly to race and socio- economic status. How can Oakland be touted as a “foodie’s paradise” and yet access to fresh, healthy food varies greatly in a city that boasts some of the Bay Area’s best restaurants, grocery stores and farmer’s markets? Why can’t we all eat well in Oakland? Aside from being a biological necessity, coming together around food is a universal behavior rooted deeply in most cultures. How do justice and access connect to this primal need and cultural commonality?

Alexander firmly believes in systematic change that takes many moving parts to make an impact. She used the HOPE Collaborative (Health for Oakland’s People and Environment) project’s Healthy Corner Store project as an example:

HOPE Collaborative has been working with existing corner stores in Oakland’s “food desert” areas—places with no full-scale grocery stores– to reshape their business practices to support selling and maintaining healthy, fresh food. Three Amigos corner store in East Oakland located on 13th and Foothill made such a change over the past few years and now features a deli. Its grand opening was Saturday, February 11 from 11am – 2pm. https://oaklandvoices.us/healthy-corner-market/

The idea behind the corner store project is to use already existing resources and infrastructure to increase access by working closely with and supporting store-owners who are open to making a change.

Alexander:  Cultural relevance and engagement on the ground level are important factors when working to re-shape a community’s food ways. For example, there has been a mobile food movement that OFPC thought would be an effective way to increase economic opportunities for local residents. Residents worried about litter and emissions from the trucks. It’s important to engage the community directly when making changes.  For the healthy corner store movement, store-owners have to ensure that their customers want to buy the things offered in a newly re-stocked store.

There’s also a personal responsibility piece where local residents can attend city council meetings, sit on commission seats (there’s about 130 open seats), and attend the meetings of organizations like OFPC, whose monthly meetings are open to the public. City council members’ biographies and contact information are listed on the Oakland government website. Oakland City Council meetings are also live-streamed, in case transportation to meetings is a barrier for residents. It’s a good idea to talk to city council members and get to know them. Urban gardening is still something that can expand and be promoted as a healing, meditative practice for communities, as we have become disconnected from how the food on our plate got there in the first place. We all need to play in the dirt more often.

Green:  What are barriers to food justice and access?

Alexander:  Competing priorities. Oakland is undergoing massive transition—especially regarding housing, rising cost of living and economic changes that hit the most vulnerable hardest. Valuable projects like urban gardening can come to a halt when organizations refocus their limited resources elsewhere instead of paying people to maintain a garden—which is hard work.

There are also procurement issues –  schools can have gardens but cannot use the food they grow to feed students because of contracts they have with large companies that require the school to use food from those big companies. 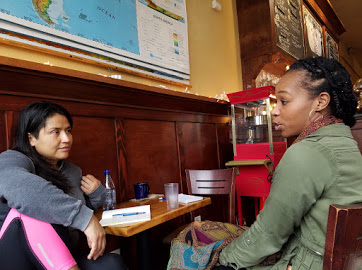 In our conversation with Alexander, I felt hope despite the barriers. Hope that we have creative, out -of- the- box thinkers with varied, relevant experience that shapes the work they do for Oakland. Hope that the impact of the new presidency will compel us to keep uniting and resisting. Alexander believes in building bridges and breaking down silos between programming, policy, non-profits, private businesses and philanthropy; cross-sector collaboration is necessary.

Alexander left us with this motivational sentiment:  At the end of the road, we all have to eat, no matter who we are. It will take many hands from across sectors, neighborhoods and cultures to make Oakland a place where everyone is eating well.