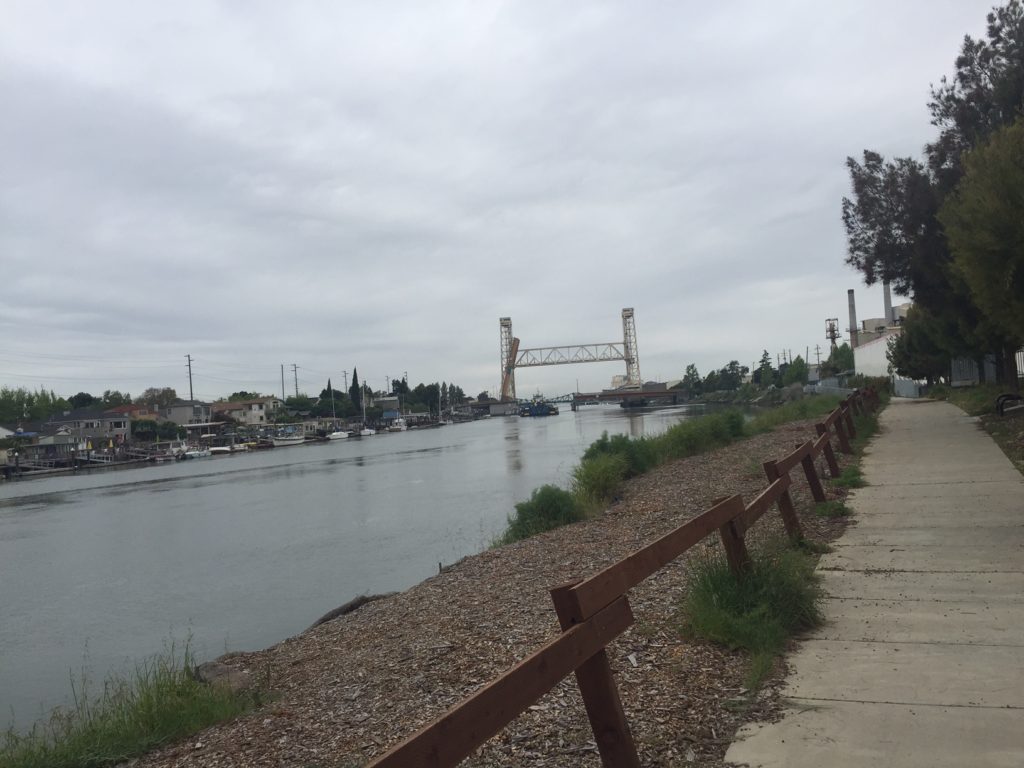 The atmosphere holds East Oakland close with an overcast sky.  The maritime air has a chill to it.  The wind and the noise of the traffic whip into my ears as I watch birds soar over the water.  A lone rower glides over the green-grey waves as I walk at a fast clip over the Park Street Bridge that connects East Oakland to Alameda. 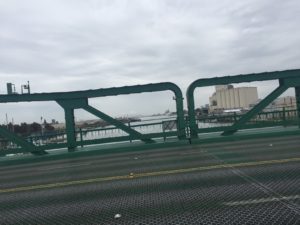 View of downtown Oakland from the Park Street Bridge 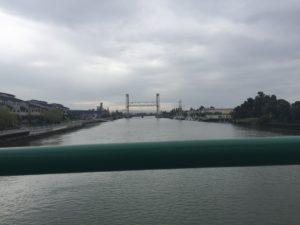 View of the Fruitvale Bridge from the Park Bridge

My dogs trot beside me, anxious to cross the green metal bridge back to land. The Fruitvale and Jingletown neighborhoods of East Oakland hug Alameda Island’s east end.  The Oakland Estuary separates the two cities and the High Street, Fruitvale and Park Street drawbridges join them.  These are the largest system of drawbridges in the State of California. 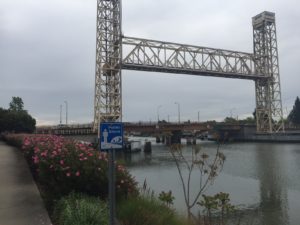 I live right on the margin, in Jingletown, between the cities though I technically reside in East Oakland.  My building saddles the 880 Interstate highway (or the Nimitz as it’s sometimes called), BART and Amtrak.  Despite Jingletown’s somewhat sleepy quality, there’s a lot of movement.  Trains whistle, the steady hum of the highway never ceases and during the day, big rig trucks impossibly Tetris  themselves into the narrow streets, waiting to unload their cargo. 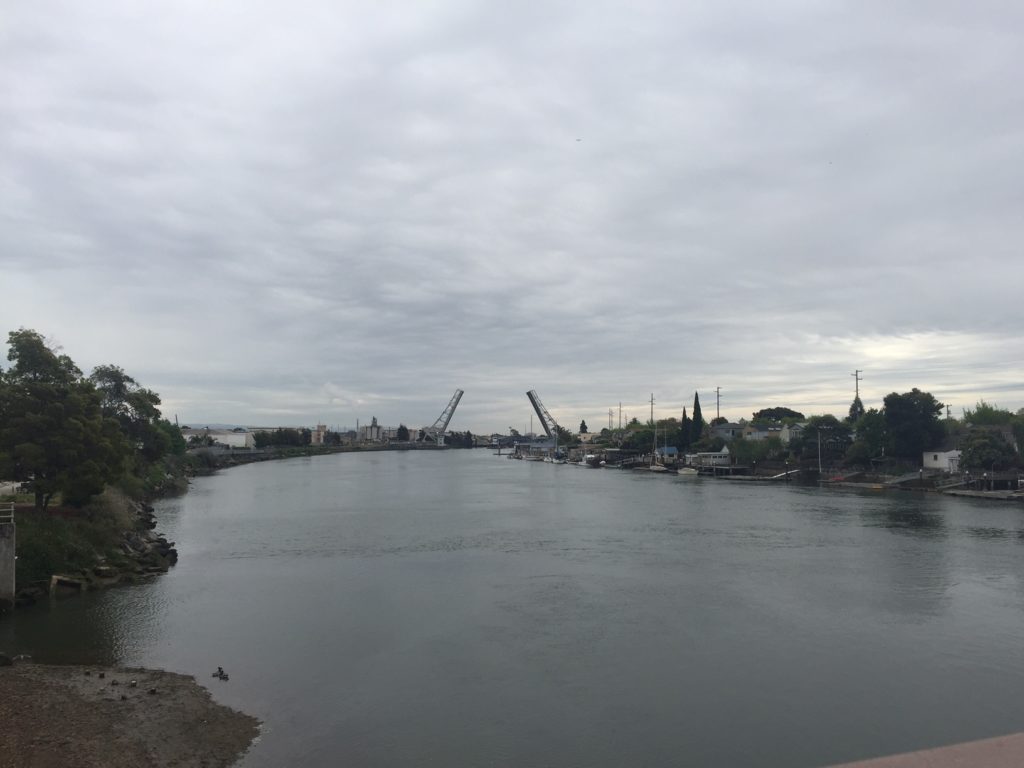 The separation between East Oakland and Alameda Island’s east end has always interested me.  The two cities are so different.  What makes the insularity of Alameda so distinct from its more colorful neighbor?

When I began to research the physical barriers between the two cities – the Oakland Estuary and the system of bridges, I immediately saw competing interests.  The Army Corps of Engineers finished the estuary in 1902 to facilitate maritime shipping and to deal with sewage. 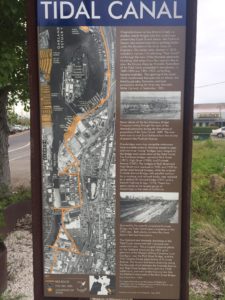 The idea was that the canal would naturally dredge and clean the estuary through tidal action.   Over time, there seems to have been a fair amount of contention about the usefulness and ownership of the Tidal Canal.  Some think the federal government wants to wash its hands of it.  Some think the city of Alameda should take it on.  Homeowners along the waterway don’t actually own some of that land.  There are lawsuits, contamination issues and access issues. 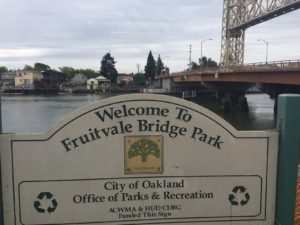 The dock that connected to this park is gone

During the course of my time living in Jingletown, I noticed a dock off the Fruitvale bridge disappear and become fenced off and the temporary homes people made under the dock near the land turned into tents and RVs across the street. 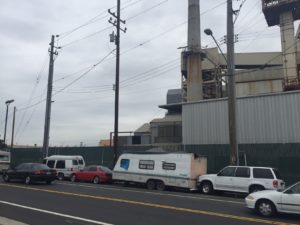 Non traditional residences; RVs and cars parked across from the Fruitvale Bridge Park

I find it ironic that this system of bridges span a waterway between so many competing interests.  Can the government, local municipalities, organizations and residents find a way to work together toward common ground?  The Estuary is part of a 500-mile Bay Trail that covers all nine counties of the SF Bay Area.  It’s meant for commuters and recreation alike.  The Estuary is home to many species of birds and other water life.  It would be a true loss to all communities to leave it in stasis just because no one can decide who owns what. 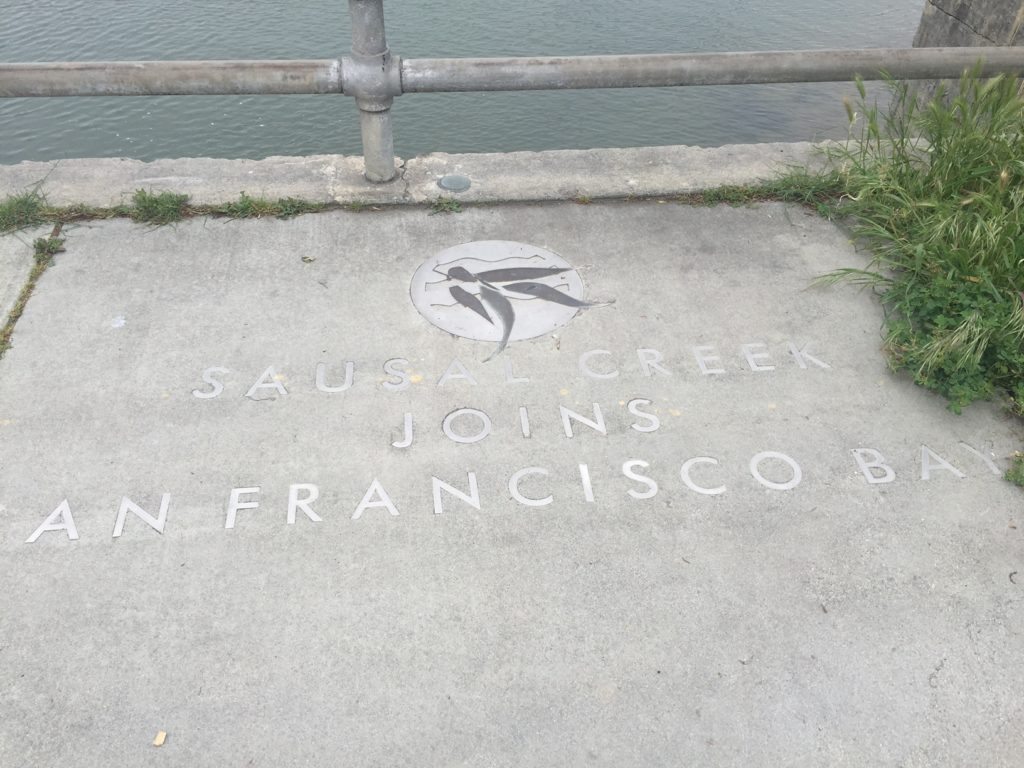