About 40 parents, teachers, and children have come to an after-school meeting in the library that is shared by two elementary schools in the Fruitvale neighborhood: ICS (International Community School) and TCN (Think College Now).

Most of the parents are Latinas and they have come to this community meeting because they are concerned about anticipated cuts to their children’s schools.

Alejandro Estrada, a fourth grade teacher and Oakland Education Association (OEA) union representative at ICS, leads the meeting. “School budgets have been frozen in recent months. We’re not getting clear answers from the district, but we’re told that the cuts are because many families have left the area because they can’t afford the rents, and so there are fewer children,” he says, in English and Spanish so all attendees understand.

“This will affect us in many ways in the future. The schools in the hills aren’t so affected. They’re not like us, where gentrification is happening,” says a mother. Estrada explains that one reason that hills schools will be less affected by anticipated budget cuts is that the PTAs at those schools can often fill any cuts to a school’s budget.

At the end of the meeting, parents urge other parents to attend and they get together to plan rides, whether in cars, by bus, or by BART. They also start to make signs to take to the meeting. 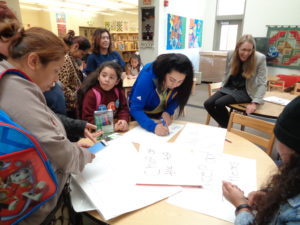 When I arrive at City Hall, about 200 parents, children, teachers, support staff, and community members have gathered in Frank Ogawa Plaza. The signs they hold reflect their concerns. 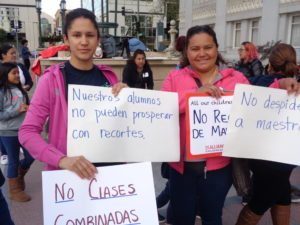 I walk around, talking with participants.

“It’s unjust that the district is cutting teachers, those who’re teaching the children. It’s an injustice against the teachers and the children,” says Liliana Ramos, a parent.

“I want to make sure that student cuts are the last resort,” says Megan Hatschek, a fourth grade teacher at TCN. She also expresses grave concerns about the potential impact of cuts on teacher retention: “I’m concerned there’s going to be a teacher exodus. That experienced teachers will look elsewhere. I’m concerned that if there’s an exodus, there’ll be new teachers, like through Teach For America (TFA), who don’t have much training,” says Hatschek.

There’s a short drumming lesson for children and adults and lots of chanting.

Then participants march around the plaza accompanied by the Brass Liberation Orchestra.

Bags are checked at security and people begin to ascend the two staircases to the city council chamber.

There is a joyful, but serious, atmosphere as chanting reminiscent of farmworker strikes continues: “Unidos venceremos/United we’ll overcome” and “El pueblo unido, no será vencido/The people united will not be defeated.”

Many of the people in the crowd are unable to enter the council chamber as the security personnel say that the seats downstairs and in the balcony are filled, even though there are empty seats. Parents and children sitting in the balcony hold their signs so they are visible to the school board members sitting at their desks on a horseshoe-shaped dais.

At 6:40 p.m., the school board president, James Harris, announces that over 100 people have signed up to speak and each speaker will have one minute. The people who have come to indicate their opposition to school cuts erupt in cheers and applause.

“The children who are here are way beyond their bedtimes. The children are here because they are losing their teachers,” says a mother, gesturing to children near her.

At 7:25 p.m., Harris asks if everyone who wants to speak has spoken. By this time, many families with children have already left and many others now leave the council chamber. Many had to leave before they were able to speak because they needed to get their children to bed for the next school day.

In the Days Following the School Board Meeting

In the days after the school board meeting, I ask attendees how they felt about the meeting. What did they think they accomplished? Did they think it was successful?

Trish Gordon is the OEA president. “The district isn’t giving us information. They’re not telling us what’s rumor and what’s fact,” she says.

Claudia Arroyo’s son is only 3 -years- old, but he will attend Oakland schools and she is planning ahead. “I believe in public education. I’m really concerned about what’s going on in the world. Especially education,” she says. “I think it’s a good start, to be seen by the people who are elected.”

Sonia Escobar is a parent at ICS and she is concerned about the lack of information that the school district is providing to parents and schools. “We don’t know anything yet. We haven’t heard about cuts at central office. There are rumors that some schools will be closed in 2018. I’ve heard they’re going to merge schools. But we’re still fighting,” she says.

I called the district to share parents’ and teachers’ concerns and to get some answers. I eventually spoke with John Sasaki, the director of communications. “There’s lot of information out there on the website. We distribute in many languages,” he said. However, I’ve spent a lot of time on the district’s website and, while it is true that a lot of information is posted, it doesn’t address the specific concerns of parents and teachers.

“Quite a few people are being laid off in Central Office,” Sasaki said when I asked about plans to cut expenditures at the central office. “Anything that happens at schools will happen at central office. We’re doing our best to minimize the impact on kids,” he added.

I imagine that parents and teachers will be keeping their fingers crossed that the district will “minimize the impact on kids.” There is a great deal of anxiety about what is going to happen at the school level and, until the district answers those questions, the anxiety and rumors will undoubtedly continue to grow