I am at the bus stop around the corner from my house waiting for the bus. Cars are buzzing by left and right. Music blares from the cars– hip hop mixed in with Mexican banda music. Some are louder than others. I smell the pupusas being made by the food cart across the street. And you can’t get away from the smell of exhaust of the cars passing by.

My observations are abruptly interrupted, “You can’t control me,” she says. I look over to the bus bench and a girl is in tears sitting next to a guy. “Why did you get off the bus?” she asks. I look at a girl standing next to me. We just give each other this awkward look. The man standing by us with his bike is either really good at pretending to be unaware or really is in his own thoughts. 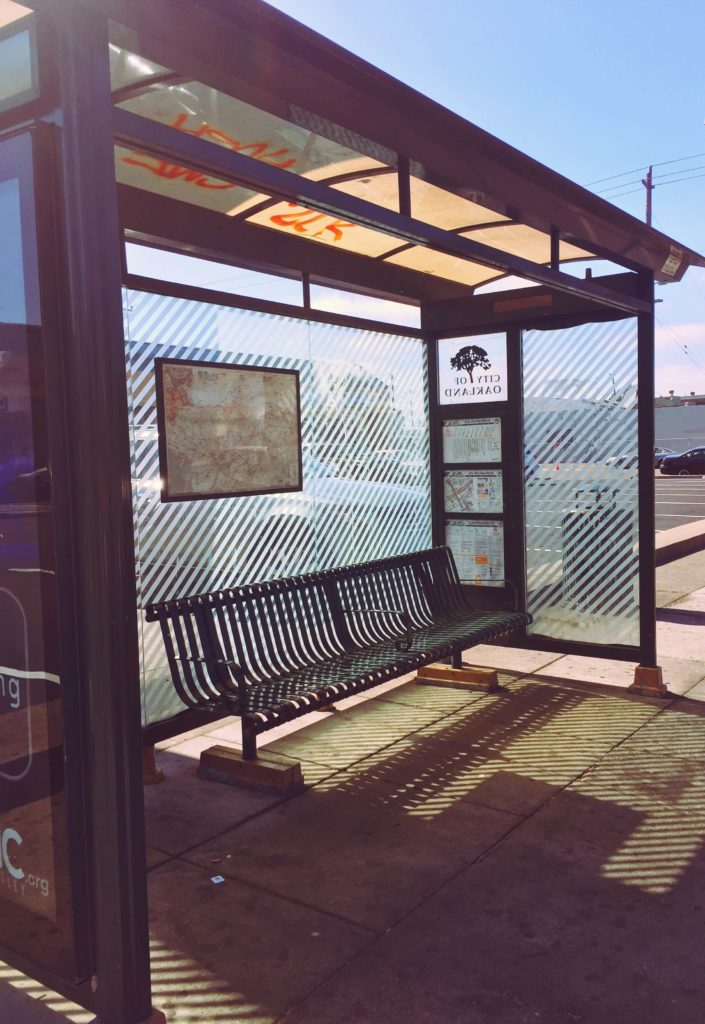 More cars go by; no bus in sight. I hear distant conversations that I can’t make out – in English and in Spanish. Dogs bark in the distance. A girl yells at two guys across the street. They either don’t hear her or ignore her. The bus going in the opposite direction zooms by. More cars pass by. More music blaring; music I grew up listening to in East Oakland. The sirens of an emergency vehicle can be heard off somewhere in the distance. A bicyclist rides past.

“Why did you take my bus pass?” the girl says. Are they still arguing? I turn and the girl is still fighting back the tears. “Why did you take your phone from me?” she says in between sobs. He’s murmuring answers but I can’t make out his words. He’s clearly good at keeping his voice down. It seems as though this has happened before.

The uneasiness of the situation could be cut with a knife like the perfect slice of cake. A bus comes but not the one any of us is waiting for.

“You can’t control me,” she says again, “I’m tired of you.” “Uh-huh,” he says, finally speaking loud enough for me to hear.

“I don’t need anything from you. I can take care of myself,” she says. I know she’s trying to be strong but it sounds desperate, unsure. The sobs keep coming in between the words. “I’ve heard that before. You’re not going anywhere,” he says.

The beep beep beep of the arriving bus saves me from the awkwardness. I climb on board. I hope they resolve their problem. They stay behind at the bus stop.