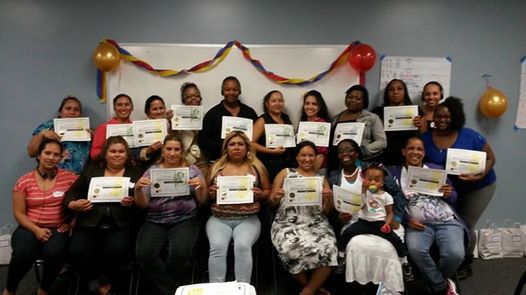 On a Thursday in August,  I heard English and Spanish as I watched African- American and Latino families share a pot-luck dinner in honor of mothers graduating from the Bay Area Parent Leadership Action Network’s (PLAN) intensive five-week summer leadership program.

There were a sprinkling of black and brown fathers in the audience, with a majority of Latino children present.

The two little Latino boys sitting next to me played rock, paper, scissors (piedra, papel, tijeras). All children played cooperatively before and after dinner, while practicing phrases and words in each other’s language.

The mothers had received training designed to help them advocate for quality education for their children when interacting with public school teachers and administrators.

Pecolia Manigo, the Program Director at PLAN, identified a couple of PLAN’s programs: 1) PLAN teaches parents (many speak no or little English) how to read and understand the Parent Handbook and School Accountability Report Card (SARC). Then PLAN uses role play scenarios and visioning exercises to transform parents into advocates for their children before they began dialoguing with school principals or directors; 2) PLAN prepares parents to organize around solutions that support families with children’s needs in local school communities. PLAN uses a curriculum that addresses oppression and prepares parents to create systems changes by teaching them organizing and planning skills.

This free program provided by PLAN* www.parentactionnet.org included childcare−a win-win scenario where both mother and child learn to navigate across cultures and races−”Deep in the E,” on Edgewater Drive down the street from Wal-Mart, a “community change agent,” training zone.

Hopefully, the parents’ training will enable academic success through the K-12 pipeline for all of their children, a pipeline that could lead them towards flourishing careers that could exceed parents’ dreams. In time we’ll know their fate.

Unfortunately, some in society are betting against our children. “The State calculates the number of future prison beds based on third grade reading failure rates,” says Arnold Perkins, retired Alameda County Director of Public Health. He went on to say, “Administrators refer to that failure rate as the gateway to the prison pipeline.”

Earlier that day I attended breakfast hosted by Perkins where Ms. Reygan Harmon, Director of Ceasefire Oakland Program, made a presentation to the Brotherhood of Elders Network, an inter-generational group of a concern African- American men, of which I’m a member. Ceasefire Oakland serves predominately black and brown men actively engaged in shootings. They range in age from their mid- 20s to 30s and most lack social and job skills.

Harmon shared strategies Ceasefire Oakland used to reduce homicides to 90 in 2013, a 28% drop from 2012, and the second largest drop since 1969. Strategies included Call-Ins and Custom Notifications.

Call-Ins consist of a group up to 25 persons on probation or parole, who meet and talk with members from criminal justice agencies, faith leaders, community organizers and members from neighborhoods affected by violence. Custom Notifications are small meetings, some one-on-one, with law enforcement and others one-on-two that may include community members; they  are not limited to people on probation or parole.

These types of meetings are effective because participants are given details about training and opportunities as alternatives to street crime and violence. Many want to stop but don’t know how, and those who continue criminal activity are told law enforcement will make them a priority.

At the end of her presentation, Harmon handed out applications to the Ceasefire Oakland Client Mentoring Program, a way for concern citizens to participate. If interested please contact Director Reygan Harmon at rharmon@oaklandnet.com.

Harmon is a product of East Oakland and Oakland public schools and graduated from Spellman College in 2002. She received her law degree from USF, and as a child, her parents kept her engaged in after-school programs and confronted Skyline High School teachers and administers when they failed to provide her and other qualified African-American students Advance Placement classes.

The Harmons and other parents started the Concerned Parents of African-American Students parents’ advocacy group,  hopefully a model for a group PLAN graduates will develop.

Unfortunately Oakland public schools then and now only provide the education that parents demand. The public school system requires help from, “community change agents,” to direct the flow, so talent like Harmon can emerge.

I later asked Harmon her opinion about Oakland. She said, “I see value in Oakland. It has a lot to offer and I’m glad to give back to my community,” and the role of the, “community change agents,” continues in her generation. Starve the prison pipeline−demand excellence from our educators. * My wife, Monica Green, works for PLAN.