Kayaking near Oakland’s airport? That could become reality if a series of projects led by Merritt College’s Environmental Management professors and students get traction with City and County agencies and grant requests get funded.

The vision is a greenway stretching from Lake Chabot in the hills all the way down to the MLK Shoreline. Furthering efforts to improve and green up East Oakland neighborhoods between 880 and the Bay, these classes have been underway since 2008. This is urban planning with community involvement.

Like the meandering creek, this has been a long process involving different communities that follow its banks and multiple government entities to draw up a Master Plan for the creek watershed. That master plan is now complete and grants are being sought to actually do the work of transforming the creek for all to use.

The creek and an AMTRAK bridge already provides quick access to local schools for youth in Sobrante Park. With only one entry point at 105th Ave, youth hop the bridge and cut the walking distance by more than half. But they need a safer pedestrian walkway not shared with hurtling trains. 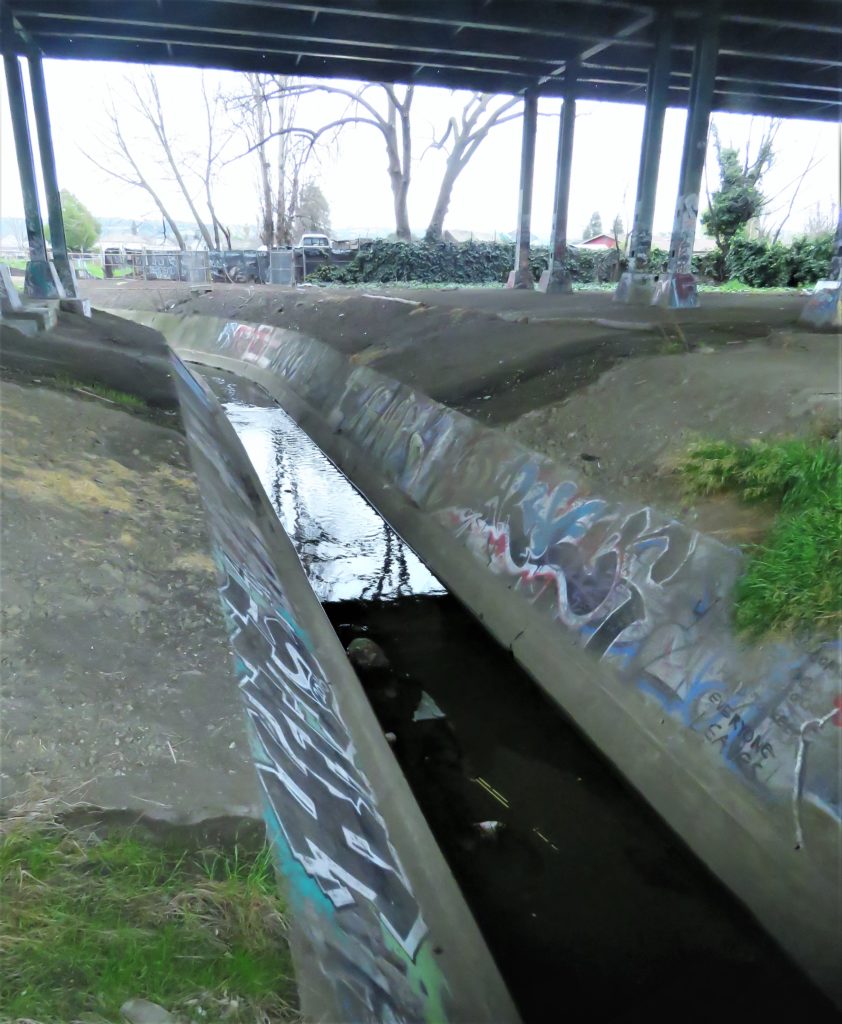 Cynthia Arrington, President of the Sobrante Park Resident Action Council [SP-RAC], told Oakland Voices,  “I’m really excited about the possibility of having a park along the creek. The prospect for a clean and healthier environment goes along with Sobrante Park goals .”

Arrington is planning on making presentations to community regarding proposed projects as developments solidify. She said Merritt’s classes have participated in Sobrante Park cleanups and service days and helped with planning and visioning the community’s future. “I’m clear on opportunities, now I’m waiting for our vision to come to fruition”

Guadalupe Gonzalez, a former student of Merritt’s environmental classes, said the project opened her eyes.  “I moved about seven years ago to Sobrante Park and the creek flows behind my backyard. My classes introduced me to this incredible 21.7 mile creek! I know it will be a symbol of hope for the community of Sobrante Park, and the surrounding areas.” 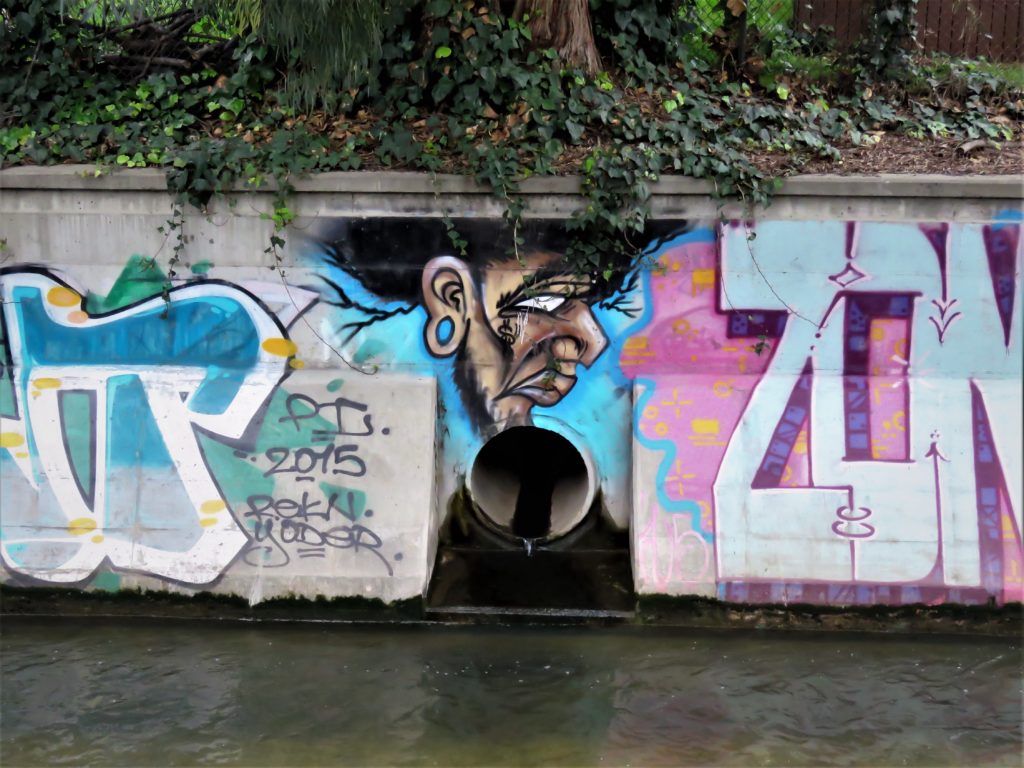 Professor Robin Freeman is the Emeritus Chair of the Environmental Program at Merritt College. He and Adjunct Professor David Ralston have taught several classes since 2008 on urban planning and environmental management and sustainability.

Freeman is animated when he describes those possibilities: “We can create routes for bikes and hikers from 105th all the way up to Hegenberger…and out to the bay. During the winter, with the creek full, we can have kayaking… not at Lake Merritt…. Kayaking in East Oakland on San Leandro Creek.”

The creek is on the sea level rise danger maps, including areas near Hegenberger Blvd. Freeman says he would relish this “…interesting design problem to prevent sea surges and also provide open space access and jobs here.”

The professors and partners applied for cap and trade money from the California Natural Resources Agency for creek bank restoration and a public access pathway, from 98th Ave crossing up to Hegenberger and also for extensions south to Sobrante Park.

Some of the grants applied for “include recruiting and hiring local people in both the planning and daily operations… and also basic science in identifying the entire ecosystem, ” Freeman said. “This would also link to local schools so classes could be held directly in the watershed.”

Adjunct Professor David Ralston worked with the City of Oakland Planning Department for many years but left in 2015 and now works at the Bay Area Air Quality Management District.

Ralston teaches environmental maintenance and sustainability.  Over the last nine years he and Freeman have been leading students and also learning from them. “Actually, it was the classes at Merritt and the attending students that seeded this project, ” Ralston said.

“We start with the ideas of urban planning then discuss how to transform cities with green spaces,” Ralson said. He has the students walk the watershed and trace the flow then work with community groups. “We do a visioning session or even a town hall,” he said, referring to last December’s East Oakland town hall at EOBA.

People need to see and understand the green infrastructure, Ralston explained.
“We have eight or nine watersheds in Oakland,” Ralston added, “Everyone should work on their local watershed.”

Wendy Wheeler, another former student, said, “It’s a huge project but something very significant to that community. I call it my 20 year project because it’s not something that will happen over night.”

“I learned the importance of connecting people and their needs to planning projects. There is often a disconnect with what average people need. ”

The professors are looking for grants, including a possible $250,000 state grant and urban greening funds from air pollution cap and trade fees. Ralston said he expected grant results in the summer and fall. “We applied for a CalFire grant and also an urban greening grant,” he said.

They are also trying now to get a licensing agreement with the Alameda County Flood Control Agency which manages a large section of the creek – and has it fenced off. “We are bringing several agencies together for joint future operations,” Ralston added. 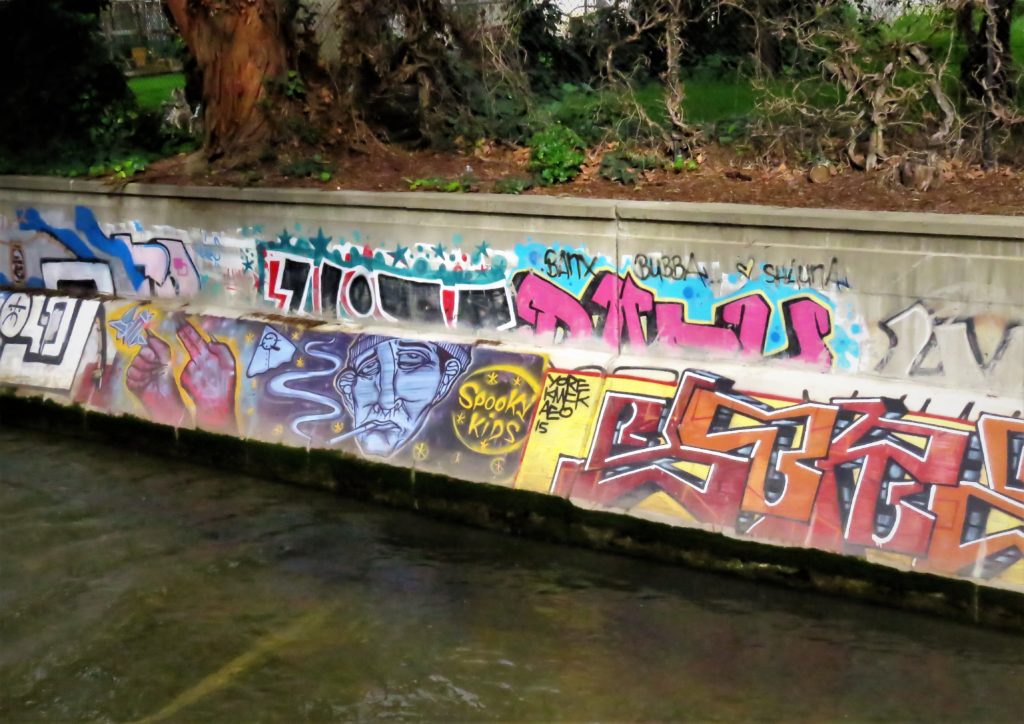 Gonzalez emphasized the creek’s importance to the area. “Sobrante Park is a very unique Oakland neighborhood, in past years it was known for heavy crime and drugs. It is surely changing but we still have a long way to go. By knowing the history and present of my neighborhood I knew what the creek would mean and how great of an asset it was,” she said.

“Having a creek be accessible would mean a great deal to a neighborhood like this,” Gonzalez continued.  “We have no parks or recreational areas which means that people here may not have an instant connection with nature. When I went to visit the closed off Creek I felt a serenity just by looking at it in the distance. I can just imagine having access to path and being able to be closer to it.”

She said it is no less than a blessing. “This creek may be a grand blessing for the community. A place for the community to come together, and be use for good, to care for, an asset that would bring other people from other areas. I saw the great benefit of having this natural asset. Which is why I’m so involved in the efforts to making this accessible to all. This creek may be much more than just a creek, with this creek this community may experience healing.” 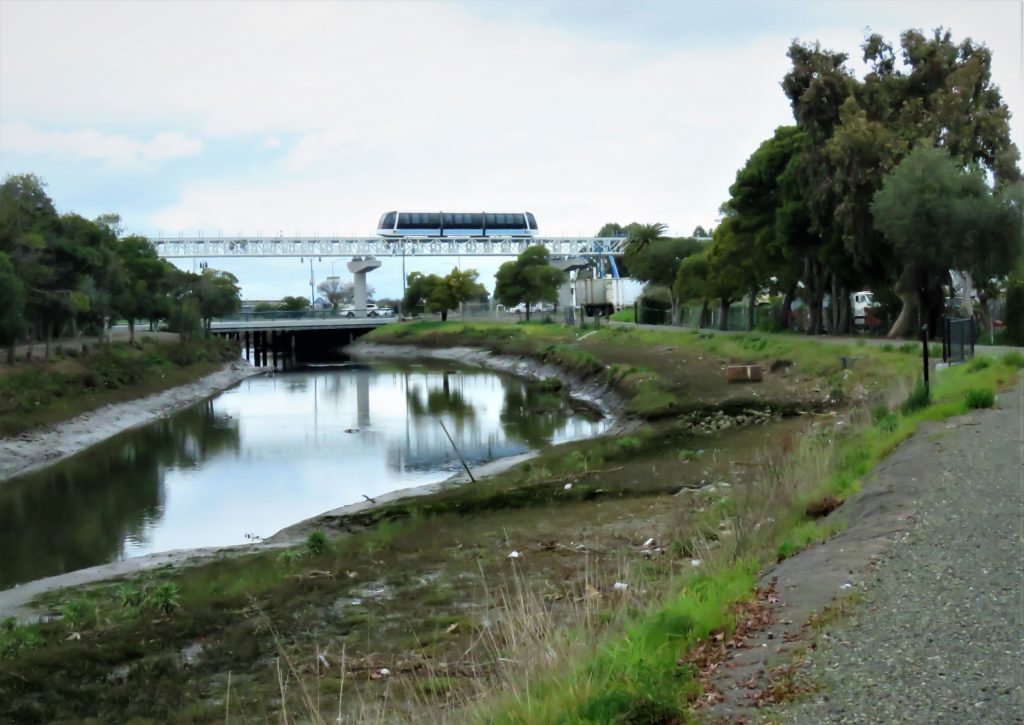 Nimrod Cain, who has participated in creek walks and cleanups, summed up the value of the creek this way:
“To some people it’s a path, but to us, it’s a sanctuary.”