Oakland United in Sorrow and Celebration 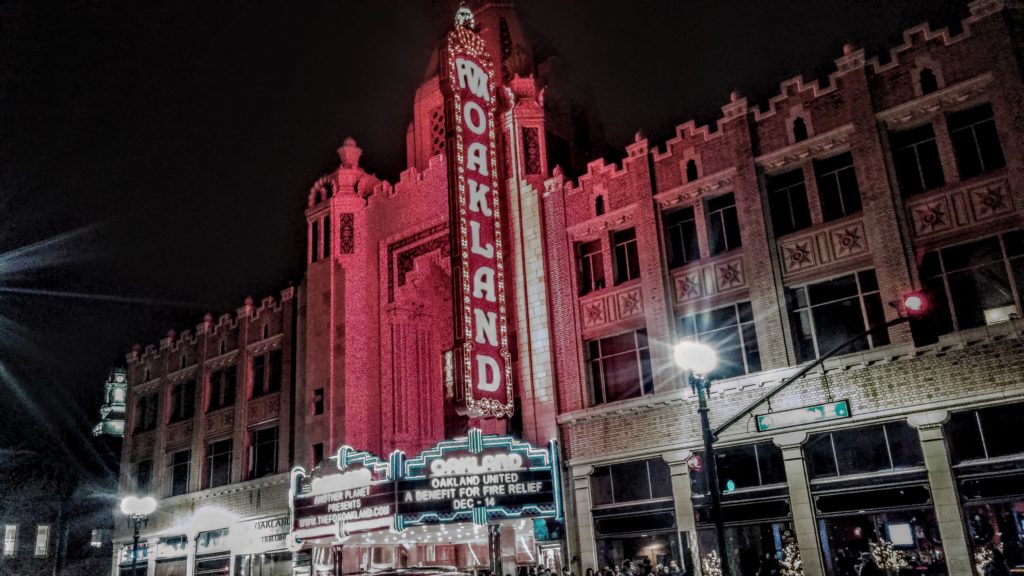 “Thank you! Love you, Oakland!” Xavier Dphrepaulezz shouted at the end of Fantastic Negrito’s brief set. Those five words summarized a recurring theme during an intensely emotional night dedicated to the victims of the deadly Ghost Ship warehouse fire.

On December 14, dozens of local artists performed at the Fox Oakland theater. All proceeds from the “Oakland United” benefit concert are earmarked for the original Fire Relief Fund managed by the Gray Area Foundation for the Arts. The four-plus hour event included musical performances, eulogies, and calls to action.

Fantastic Negrito’s song choices from their album “The Last Days of Oakland” captured the zeitgeist. First, their song “Working Poor” resonated deeply with the audience, as lyrics described the negative impacts of gentrification that “clean my city” and make “me move to Stockton.” Next, their cover version of traditional American folk song “In the Pines” reinterpreted the refrain “Black Girl” as the pain of a single mother whose son is shot by police.

Throughout the night, the mood shifted from somber and reflective to jubilant and proud. At times, attendees, speakers, and performers had to pause and choke back tears. But, the classic, underdog Oakland spirit also inspired plenty of cheering, dancing, and fist pumping.

Oaklander Boots Riley of The Coup described this exuberance well as “the joy and ferociousness that people we lost lived their lives with” before announcing “we came to funk!”

Even San Francisco-based performer Thao Nguyen, of Thao & the Get Down Stay Down, was inspired to declare, “I’ve lived in San Francisco for over 10 years, so I think I have it on good authority that Oakland is much cooler.”

As laughter rippled through the crowd, it was clear that the event’s fusion of sorrow and celebration provided a much-needed catharsis for many Oaklanders in attendance.

“…a phrase keeps coming up: “It could have been any one of us.” KQED Arts’ Online Editor, Gabe Meline, read from a piece he wrote shortly after the fire.

“For those of us involved in artist spaces one way or another, the tragedy is impossible to process. I, too, have been inside a warehouse like that, we think, living, working, dancing into the night. According to the Oakland Fire Department, this fire has taken more lives than any in the city’s history. And yet for many of us, these spaces are what have kept us alive.” 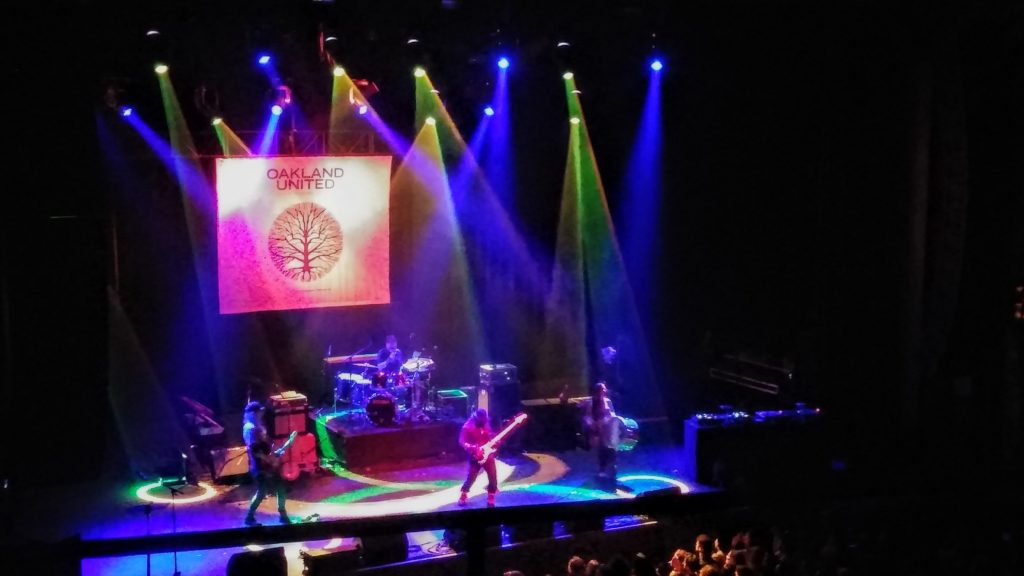 East Bay local and Primus frontman, Les Claypool, expressed similar sentiments at the end of the night. “As an artist and musician playing, living and partying in those kinds of spaces …Seeing this happen and having that background touches close to home,” he said.

Close to home, indeed. It’s been a few weeks but I still can’t look out my back door without seeing billows of angry smoke. Heavy rains have since melted the largest black ashes that had drifted onto my street. But grief still hangs in the air. While I didn’t know any of the Ghost Ship warehouse victims personally, I need both hands to count the people loved and lost, known to me by one degree of separation.

Aftershocks from the Ghost Ship warehouse fire in Oakland’s Fruitvale neighborhood will reverberate for years to come. The implications for the Bay Area’s housing crisis and artist community are countless. Politicians, bureaucrats, and lawyers sift through the blame, as neighbors, friends, and family continue to grieve. Some young artists liken the tragedy to this generation’s Triangle Shirtwaist Factory Fire.

Since that fateful First Friday, the Oakland community has come together in different ways. Some attended a vigil at Lake Merritt while others gathered in the Fruitvale neighborhood for a ceremony and solemn procession. Online crowdfunding platforms have been vital for helping raise individual funds for victims’ families.

In addition to outpourings of grief and financial gifts, Oakland’s artists and activists have also sprung into action. Omni Commons created a new DIY Safety Working Group to protect friends and creative spaces. The group meets regularly and has already distributed hundreds of free fire extinguishers and challenged the city’s broken code-compliance and permitting system.

Nationally, the response has been mixed. Supporters like Gui Cavalcanti have published DIY Fire Safety Guides but some city governments, from Baltimore to Denver, have moved quickly to evict artists in warehouse spaces. More alarming is that some of these evictions may be prompted by an anonymous group of homophobic, white supremacists who are organizing attacks on artist communities in an effort to “Make America Great Again.”

Like so many other tragedies, Oakland’s Ghost Ship warehouse fire was immediately politicized. As it should be. Because ultimately, it is generations of failed political leadership in Oakland that created the unsafe building conditions so many Oakland renters—whether commercial or residential—are forced to call home.