The typical immigrant narrative tends to showcase the struggle more than success. But what if there was a way or one person who could balance this type of narrative? I am positive that there are plenty of people whose life is similar to my own brother. The one difference is that I know my brother and he has demonstrated resilience time and time again. My brother is a man worth getting to know. His story is essential to challenging the immigrant stereotype. 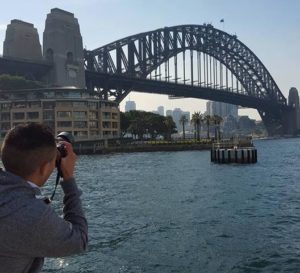 Daniel E. Morales Sikahall arrived at the San Francisco International Airport at the age of eight on June 1, 1991. He was born in Guatemala City, Guatemala, a small country in Central America. It was there that he spent his formative years with our mother and grandparents, and where he was educated both in Spanish and German.

However, when he moved to the United States with my mother to join my father, Daniel had a daunting challenge ahead. My brother had to learn English and continue his education in English – a stark difference to what he had grown up learning. Still, he pushed on and excelled academically.  But his interests couldn’t be farther from the academic– because Daniel is an artist, a violin player, designer, aspiring architect, and photographer.

In fact, his one true passion for design followed him through to his senior year when he researched schools that offered programs in both architecture and fashion design. He came upon Pratt Institute, one of the only schools at that time to have classes in both fields. Though he continued to work hard in high school, his dream school only offered him one-third of a scholarship. This unfortunately made my brother rethink his decision of where he would pursue his academic career. This was a period of frustration because my brother was a good student in school and his dream was thwarted by how expensive college was and still is.

What amazes me about my brother is that although he has been sensible and responsible in all his decisions in life, he has a way of making everything he does turn into gold. He has the Midas touch. His mentality of “do it right or don’t do it at all” has continuously pushed him further in life despite all the letdowns and obstacles. Even though it meant that he pursued his goals slowly and was often frustrated.

Despite not going to Pratt, Daniel attended Laney College here in Oakland. Later on he transferred to the University of California, Berkeley where they offered an architecture and structural engineering program. While he was in community college, he took a course in structural engineering that peaked his interest. And it seemed this particular minor would make him more marketable in the future. After what was at times a stressful college journey, he graduated from UC Berkeley in December 2005.

Years later, even with new obstacles, he is still pushing forward and in many ways attributes his success to a particular verse and his faith. My brother quotes to me to “serve wholeheartedly, as if you were serving the Lord, not people.” (Ephesians 6:7) This verse alone exemplifies that my brother is more than what he seems.

If you were to meet my brother, you would be intrigued by his serious eyes and his determination  to do everything right – making  sure that each task, even the smallest, is golden. That it is as perfect as it can be, no matter how long it takes to accomplish and no matter the struggle it takes.

My brother’s, Daniel E. Morales Sikahall, story is of an immigrant who has achieved, bringing his artistic personality, traditions, and hard work to the table of this melting pot of a city by the Bay. It is important to know and remember that this man who arrived at such a young age is still on a journey to become the successful immigrant. It is a refreshing notion during this time in history when anti-immigrant sentiment is felt throughout our communities in Oakland, and the nation as a whole.